Ray Bradbury’s great dystopian vision is 60. Thankfully the book-burning world it depicts has not yet come to pass, so we can still read it and other dark visions 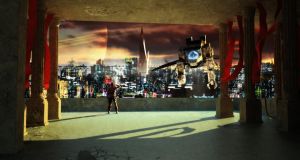 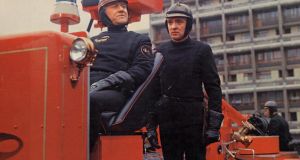 Fahrenheit 451 is the temperature at which paper spontaneously ignites. It inspired the title of Ray Bradbury’s novel about a future in which firemen burn forbidden books. The novel is about state censorship, the rise of television, the dumbing-down of culture and the death of literacy.

Thankfully, this fiery dystopia hasn’t yet come to pass, so we can still read Fahrenheit 451. And Bradbury would surely be pleased to know that, 60 years later, dystopian fiction is still popular.

Utopias on the other hand? Not so much. They had a golden run from Plato’s Republic, through Thomas More’s island (where the word “utopia” originated) and on to Jonathan Swift’s Gulliverian adventures, then peaked in the 19th and early 20th century, an era of high-minded polymaths who believed in the perfectibility of mankind and wrote many fantastical novels about ideal societies. Standouts from this era include News from Nowhere, an agrarian idyll by William Morris, and Herland, a proto- feminist utopia by Charlotte Perkins Gilman.

It was difficult for such fiction to survive the horrible excesses of the Soviet Union and Nazi Germany, which showed that one person’s utopia is another’s dystopia. So the dystopian novel emerged, driven by industrial hangovers and socialist disappointments.

In the earliest examples, these strange allegorical polities were found on undiscovered islands. But now, with the world being pretty-thoroughly mapped, they were situated on faraway planets, in the distant future or in alternative realities.

There’s a whole subgenre of excellent “what if the Nazis won the war” dystopias, including Robert Harris’s Fatherland, CJ Sansom’s Dominion and Philip K Dick’s The Man in the High Castle (Republican presidential wannabe Newt Gingrich even wrote one of these. It’s called 1945).

Rage against the machine
Dystopian stories usually pit a timid free-thinker against an overwhelming system. Acclaimed novels of the genre worry about the role of the state (1984 by George Orwell), the subjugation of women (The Handmaid’s Tale by Margaret Atwood), inequality (The Iron Heel by Jack London and The Time Machine by HG Wells) and the politics of pleasure (Brave New World by Aldous Huxley).

The best of these books do not foretell the future. While they have prescient things to say (about genetic engineering in Brave New World, for example), they are really about the societies in which they are written and not exercises in futurology. Of her own dystopic writing, Margaret Atwood said: “I would not put into this book anything that humankind had not already done, somewhere, some time, or for which it did not already have the tools.”

These works are not designed as predictions, but rather warnings. For a reader, the pleasure of dystopian fiction comes from exploring the primordial tension between individual freedom and societal control, and the relief that you feel when you put the book down.

The Machine Stops
By EM Forster

In 1909 the man who wrote Howard’s End and A Room with a View also foresaw the internet in this short story. Sort of. The Machine Stops depicts a future of shut-ins who get to share ideas with hundreds and thousands of “friends” via a global machine (incidentally, please retweet this article).

We
By Yevgeny Zamyatin

We, written in 1921 by a disappointed Russian socialist, was used by George Orwell as a model for 1984. It is set in a city in which citizens have numbers instead of names, live in glass buildings, and have their fertility regulated and their thoughts controlled by an all-powerful state headed by “The Benefactor”. Then our hero, D-503, is sexually and politically liberated by I-330.

In Huxley’s population-controlled World State, jobs are allocated according to a genetically engineered caste system, and people are socially conditioned to consume from birth. People are controlled, not by explicit violence but by freely available, consequence-free sex and drugs. Silly old Huxley thinks this is terrible. Okay, it is terrible. The individual is subsumed into the state just as effectively as in the more clearly repressive dystopias. I always preferred Orwell, but Huxley’s dark visions are closer to today’s reality in the western world.

When Orwell wrote 1984, there was a real chance Europe could fall to totalitarianism. He really wasn’t writing about supermarket security cameras, reality television shows, social networking and all the other modern annoyances we like to call “Orwellian”. Still, Winston Smith’s bid for psychological freedom from the telescreens and

thought-limiting NuSpeak of the repressive Ingsoc party is the most chilling yarn on the list. It really is doubleplus-good.

Atlas Shrugged, a vehicle for Rand’s “objectivist” (translation: greedy) ideals, depicts a world in which fiery entrepreneurs are stifled by excessive government regulation and social-welfare dependent, leftist straw-men. So they go on strike. Ha! That’ll show the work-shy majority to respect the wealth creators! Atlas Shrugged is held in high regard by many American policy-makers, most notably Rand’s friend, the former chairman of the Federal Reserve Alan Greenspan. Demonstrating that the dystopia/utopia distinction is in the eye of the beholder (many newspaper columnists believe Ireland is a dystopia), the social-democratic hell the novel fears actually seems quite pleasant.

Guy Montag, a fireman, becomes riddled with doubts about his job – book burning. Fahrenheit 451 is often seen as a straightforward attack on totalitarian censorship. But Bradbury has said that his key concern was the rise of simpler, faster forms of new media and an era when a dumbed-down public wanted to abridge any texts that offended or confused them.

A Clockwork Orange
By Anthony Burgess

Burgess’s 1962 novel sets the reader between “ultraviolent” youth gangs that rape and murder, and a repressive, brain-washing state. It’s a brilliantly realised, future-slang-enriched story about the conflict between freedom and order. The optimistic final chapter, which offers a possibility of redemption for the antihero Alex, was omitted from the American edition . . . and recently their government stopped working. Coincidence? I think not.

The Handmaid’s Tale
By Margaret Atwood

Margaret Atwood’s brilliant novel is set in a theocratic, war-torn America where fertility rates have fallen and some women, like our heroine Offred, are used as child-incubators for an elite. As Atwood has pointed out, societies that restrict female education and control female fertility aren’t purely the stuff of science fiction. She later returned to dystopian fiction with a trio of novels: Oryx and Crake, The Year of the Flood and MaddAddam.

The Running Man
By Richard Bachman (aka Stephen King)

It’s 2025. The US economy is in ruins but its citizens are distracted by a popular game show in which contestants are tracked and killed by professional hunters. Now it’s 2013 and I’ve just watched a (real) programme called Naked and Afraid, in which people are dropped naked on a desert island to see how they survive. So a programme modelled on The Running Man could well be on air by 2025, probably to be hosted by Dermot O’Leary. Arnold Schwarzenegger, who starred in the film version, went on to apply the dystopian lessons he learned to governing California.

V for Vendetta
By Alan Moore and David Lloyd

I have to include a graphic novel on the list. My own introduction to dystopias came via the future fascist worlds of Judge Dredd and Torquemada in the UK comic 2000 AD. Moore and Lloyd’s V for Vendetta was initially published in the cash-strapped independent comic Warrior. It’s set in 1997 in a grimily plausible, post-nuclear-war Britain, where an anarchistic Guy Fawkes-mask wearing provocateur called V challenges a fascist, propaganda-controlled state. V masks are still very popular with the anti-corporate members of Anonymous, even though the rights to the image are owned by the multinational corporation Warner Brothers. Now that’s dystopian.

A Beautiful Day in the Neighborhood: A tremendous film a great young director

A profound deafness to the female voice
9

The power of the pre-order
10