The Gloaming one of many artists in residence in Marble City 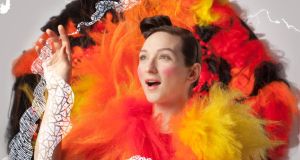 Shara Worden, aka My Brightest Diamond, who will be taking part in this year’s Kilkenny Arts Festival, which begins on August 8th

Secret concerts, artists-in-residence, a grand ensemble finale and surprise guests are all in store for this year’s Kilkenny Arts Festival (KAF), which takes place for 10 days from August 8th. Festival director Eugene Downes has taken the genres out of his programming and asked his artists and his audience to mix it up a little in his first year in charge.

Martin Hayes and The Gloaming will lead the Marble City Sessions, with each band member working and performing with US and Irish artists. This builds to a finale concert in St Canice’s Cathedral. Among those taking part are jazz guitarist Bill Frisell, folk singer Sam Amidon, clarinettist Doug Wieselman and dancer Nic Gareiss. Two free concerts will also take place each day in four historic gardens.

US poet laureate Billy Collins and Shakespeare’s Globe Theatre Company with be in residence for the duration. The Globe returns for a third year in a row, this time with an open-air production of Much Ado About Nothing in Castle Yard. Shakespeare gets a second look-in, thanks to a reimagining of King Lear by Irish Modern Dance Theatre, with New York dancer Valda Setterfield in the title role. Benjamin Bagby will perform Beowulf in Old English, mixing song with recital and harp-playing.

KAF has a well-deserved reputation for its classical repertoire. This year, the Heath Quartet will perform Beethoven’s string quartets in 10 lunchtime concerts, while the composer’s piano concertos will be performed by Barry Douglas and Camerata Ireland. Other highlights include a public lecture from pianist Alfred Brendel and Christian Curnyn and his Early Opera Company performing Handel’s Acis and Galatea.

Stargaze, a Berlin contemporary chamber orchestra, will have three projects at KAF including: a collaboration with US indie band The Dodos; an Irish premiere of Death Speaks by Pulitzer Prize-winning composer David Lang, featuring Shara Worden of My Brightest Diamond; and bringing the artists in residence on stage to tackle Terry Riley’s In C.

UK artists Architects of Air return this year with Pentalum, a maze of inflatable spaces and sound, while glass artists Róisín de Buitléar and Karen Donnellan are working on Resonance, which involves creating glass instruments.

The festival will also host the first Irish show by New York-based painter Marilyn Lerner, whose work is based around abstract geometric oil painting. The 800-year-old St Mary’s Church is being restored and the work-in-progress will host Canadian artist Max Streicher, who will be filling it with animated clouds suspended from its ceiling.

A series of talks will be headlined by the Hubert Butler Annual Lecture, which this year will be Theatre of War: Inside the UN Security Council by Richard Ryan, Irish ambassador to the UN from 1998 to 2005 and president of the council in the aftermath of September 11th, 2001.

Psychiatrist in the Chair: Delving into the great mind of Anthony Clare
6