When Ballymun was all towering promise 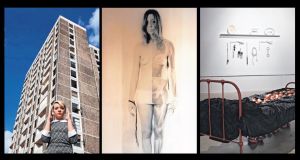 From left: Spectres of Modernity by Ruth McHugh, a work by Giancarlo Marcali from Foreign Bodies; a piece by Sue Kneebone from Border Crossings

Working with several young women from the Ballymun community, McHugh devised a wardrobe of 1960s clothes, including Dior’s Mondrian dress, another by Mary Quant and a dress using Bridget Riley’s op art patterns, all expressing the optimism of the prior and in tune with the modular structure of Ballymun’s pre-cast concrete panels.

McHugh sets her young performers in the dilapidated setting of Ballymun on the verge of erasure. There they assume the stylised poses of 1960s fashion photography. The upbeat promise of things to come meets the downbeat reality of disappointment. On the soundtrack, those who lived in Ballymun express the absolute opposite of the negativity you might expect, including astute analysis of the flaws, some inherent, some short-sightedly imposed, that led to the failure of a genuinely promising and ambitious scheme. It is a relatively short video, but dense with information and implications, and McHugh delivers it with a light touch and an encouraging absence of pessimism. Until July 24th

Border Crossings – Various artists
Galway Arts Centre
★★★★
The basic motivation behind much of the work in Border Crossings could be summed up as a desire to articulate and foreground the experiences of some of the silenced, dispossessed and ignored, in this case a portion of the innumerable people who were abused and often destroyed through transportation to penal colonies.

Many of those involved were Irish, subject to British authority and transported for many reasons. Some 24 per cent of those transported to Australia were Irish. During the Famine, utter desperation drove many more to emigrate. All of the artists and curators involved are Irish or have historical Irish connections.

Not to forget another category of the dispossessed: the Aboriginal people who were viewed as both inconvenient and lesser. Julie Gough’s Banished resurrects the names of the Tasmanian Aboriginal people exiled to Flinders Island and, often, a wretched end. She also sourced the records of nearly 4,000 Irish people transported to Van Diemen’s Land. The details are often heart-breaking.

Yhonnie Scarce of the Kotatha and Nukunu people looks at the relationship between her great-great-grandmother Dinah and an Irish surveyor, Patrick Coleman, the father of Dinah’s son Willam “Willie” Coleman. Patrick’s genetic imprint on the family is unmistakable, Scarce notes, but the nature of his relationship with Dinah remains obscure. Did he see his son and name him, or had he moved on, unknowing and perhaps uncaring?

The intensity of Dominic Thorpe’s performance works is often leavened by a touch of offbeat, even surreal lyricism. It’s tempting to say that he has concentrated on those who found themselves, thorough context and circumstances, cast as victims (here he specifically looks at cultural displacement). But it’s not so simple: he sees victims and perpetrators as two sides of the same coin, both moulded by forces beyond their control. Sue Kneebone’s fractured family history, symbolised in vivid sculptural installations and a brief video, perfectly illustrates the equation as two ancestral brothers, escaping post-famine Ireland, pursued radically divergent emigrant paths. Until July 24th

Foreign Bodies – Elisabetta di Sopra, Giancarlo Marcali and Ilaria Margutti
126 Artist-Run Gallery, Galway
★★★★
There is much talk in Galway about how brilliant a gallery the former Connaught Tribune print works makes – more than ever now that its floor plan has been simplified for Hughie O’Donoghue’s centrepiece show. It comfortably accommodates the museum-scale exhibition and, by virtue of its saw-tooth roof, it boasts excellent natural light. Meanwhile, Galway’s other movable feast of a gallery, 126, is up and running at its latest address, a former gym. Appropriately, the show is all about the human body. In a virtual age, Foreign Bodies aims to jolt us with intimations of corporeal fragility and vulnerability.

It is a co-operative European project; all three participating artists are Italian. The show comprises performance-video pieces by Elisabetta di Sopra, photographic work by Giancarlo Marcali and textile work by Ilaria Margutti. All are substantial, considered and rewarding, but perhaps by virtue of her medium –which could be termed embroidery – Margutti is the real surprise. Among other works, she shows two textile books, and they are dazzling pieces of work.

She teaches drawing and art history, and both feed into what she does, which began with painting and crossed into textiles. While sewing is immediately and intricately related to the body, she amplifies and extends the connections. The images she fashions are layered: initial impressions give way to underlying traceries suggestive of the organic systems and frameworks that constitute and sustain the body. She shows two textile books, sumptuous, gorgeous, richly textured objects that work their way around the figure in close-up, tangible, sensual images using the qualities of yarns and wool to convey the nature of organic processes. The subject seems to both create and mend her body with needle and thread.