Like all geniuses Cézanne assimilated. Are the similarities one sees in colour, composition and light deliberate, unconscious or mere coincidence? 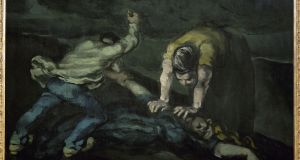 It is more a hypothesis than a proven tenet of art history, but an exhibition titled Cézanne and the Master Painters, a Dream of Italy, at the Musée Marmottan in Paris until January 3rd, purports to show that Paul Cézanne (1839-1906) was profoundly influenced by 16th and 17th century Italian art.

Cézanne, who is widely considered the father of modern art, in turn influenced the 20th century Italian painters of the Novecento movement, say the exhibition’s curators Alain Tapié and Marianne Mathieu.

Virtually every painter of the last four centuries has been influenced by the Italian Renaissance and Baroque periods. Likewise every painter of the past 100 years has Cézanne in his artistic DNA. After an intriguing, pleasurable hour or two, one leaves the Marmottan slightly unconvinced.

The exhibition includes 20 canvases by old Italian masters, 13 by 20th century Italians and 31 by Cézanne, which makes it well worthwhile. The definition of Italian has been stretched to include European painters who worked in Italy, such as El Greco, Nicolas Poussin and Jusepe de Ribera.

The curators strive to convince one of the validity of their theory. Cézanne studied Virgil, Ovid and Lucretius at school. He read Stendahl’s Painting in Italy, and viewed Italian masters at the Louvre and in the museums of Aix-en-Provence and Marseille.

But he never went to Italy.

“Cézanne was permeated with Latin culture,” says Tapié. He quotes the art historian René Huyghe, who wrote in 1936: “Cézanne is the last surge of Latinness. He tries to restore the security that was lost at the end of the 17th century. Patiently, with passion, he searches for what is solid, permanent...”

It would be easier to trace the Italian lineage of Cézanne’s oeuvre if he had imitated the Italians more blatantly. But like all geniuses Cézanne absorbed and assimilated. Are the similarities one sees in colour, composition, form and light deliberate, unconscious or mere coincidence?

In his early period, which Cézanne called couillarde or ballsy, his dark red and blue palette and dynamic movement appear to have drawn from the work of the 16th century Venetian Jacopo Robusti, known as Tintoretto.

Cézanne was fascinated by crime stories, which critics of the day called putrid literature. He read the grisly 1867 novel Thérèse Raquin by his childhood friend Emile Zola. These may have led him to transform Tintoretto’s doom-laden Biblical themes into violent, profane scenes.

In Tintoretto’s Lamentation of Christ (1580), the dead Christ lies horizontally, a limp hand falling forward. The hand of the female victim in Cézanne’s The Murder (1870) falls similarly askew. Both paintings portray a tangle of human limbs, knotted like tree trunks.

Tintoretto’s Descent from the Cross (1580) is compared with Cézanne’s Strangled Woman (1875-76). Both show tortured bodies falling. Christ’s dangling arm forms a triangle with Nicodemus. Cézanne’s triangle shows the murderous husband hunched over his helpless wife. She raises her arms while her long hair spills onto the ground and the husband’s mistress looks on.

Strangled Woman was painted when the Impressionist movement, which Cézanne nominally belonged to, was in full flight. Cézanne’s dark, violent murder scene could not be farther from the sun-dappled landscapes of his fellow painters.

Yet like the Impressionists, Cézanne loved nature and painted outside. He spent much of the 1870s painting with Camille Pissarro, who was something of a father figure to the taciturn, anti-social Cézanne.

“I want to make of Impressionism something solid and lasting, like the art in museums,” Cézanne said.

He painted Mount Sainte Victoire more than 80 times. The mountain contrasts with the vaporous landscapes of his Impressionist friends, and projects the durability Cézanne spoke of.

“Cézanne said of himself that he was ‘a unique painter in the world’,” says Tapié. “He said it with self-derision, but he thought it, and it was true.”

In the poem An Artist, Seamus Heaney conveyed the way Cézanne’s difficult character seeped into his oeuvre. “I love the thought of his anger./His obstinacy against the rock... The way he was a dog barking/at the image of himself barking. And his hatred of his own embrace/of working as the only thing that worked,” Heaney wrote.

The Musée d’Orsay lent its green and mauve Mount Saint Victoire (1890) for the exhibition. It is compared to Jean-François Millet’s 17th century Classic Landscape. Here too the curators stretch their theory, for Millet, like Cézanne, never went to Italy. But he admired Poussin, the classical 17th century French painter who spent the last 40 years of his life in Rome.

We know how much Cézanne admired Poussin, whose work, he said, helped him “to know who (he) was”. Poussin’s Landscape with Bacchus and Ceres (1625-1628) is compared to Cézanne’s Pastorale (1870).

The latter feels like a spoof of Manet’s Déjeuner sur l’Herbe (1863), with clothed men – one of them Cézanne himself – surrounded by naked women. Is it mere coincidence that Cézanne repeats the composition of Poussin’s canvas, with bushy trees and vertical lines to the left, and lolling, horizontal bodies in the foreground?

Cézanne’s Sitting Man (1905-6) is compared to Mario Sironi’s Brother Ettore (1910). Both are fine portraits, but are they really related?

Cézanne’s Still Life, Pears and Green Apples (1873) exudes a silent, poetic introspection similar to that of Morandi’s Still Life with Bottle and Glasses (1945-1955) and Still Life (1960).

“Some people travel the world and see nothing,” Morandi said. “To understand it is necessary not to see too much, but to look carefully at what one sees.”

Cézanne would surely have agreed.