A retrospective displays the Welsh painter’s ‘art of deceptive modesty’ 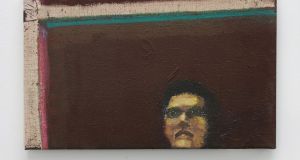 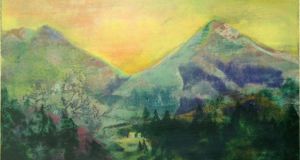 Detail from Clearing by Cara Thorpe 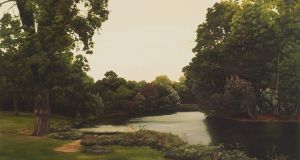 To the Present is a compact mini-retrospective of the work of Merlin James, including works dating as far back as the mid-1980s. As far back, that is, as the work he was making for his MA at the Royal College of Art in London. James was born in south Wales and first attended Cardiff College of Art before going on to the Central School of Art and the RCA in London. He’s of a generation with the iconoclastic Young British Artists but he was never associated with them. That’s not because he was and is a painter – there were several painters among their ranks. It might have been because there seemed to be something consciously old-fashioned about his approach. To say that he drew inspiration firmly from traditional easel painting rather than the more recent, disruptive initiatives of the 20th century is only a mild overstatement.

Then, instead of staying in London, he moved to Glasgow, an alternative art capital. From there, he has maintained an energetic presence nationally and internationally as a painter, writer, lecturer and curator. His experience was far removed from the overnight success enjoyed by the YBAs. In fact, it’s only relatively recently that the art establishment, in the sense of major galleries and institution (including Tate, the Dallas Museum of Art and the Musée d’Art Moderne de la Ville, Paris), curators and media outlets on both sides of the Atlantic, has begun to pay him serious attention.

That may be because, gradually, the totality of his endeavours, encompassing his writing, teaching and curating as well as his paintings, have brought his views on art history and current art making into focus. That is, taken in isolation his paintings might remain puzzling in their idiosyncrasy, but seen in the context of his championing of such notionally peripheral figures as Jean Hélion and Serge Charchoune, they more clearly articulate a particular stance in relation to art history and production.

This emerged, for example, in his involvement in Other Modernisms, a survey show of Charchoune’s work (seen here at the Douglas Hyde Gallery). Broadly speaking, James’s stance seems to be that the standard, monolithic history of Modernism is flawed. Equally flawed is the notion of Postmodernism as an era of anything goes, playful irony that succeeded it. Rather, he suggests a more nuanced, pluralistic view of the Modernist era, allowing for contradictory voices and talents, for developments dismissed as tangential or irrelevant and for purely personal, individual initiatives. All of which makes good sense.

At first glance, his own work might be taken as a critique or dismantling of painting. Modest in scale, his paintings can appear casually put together, with bits of dust, grit and other debris incorporated in the paint surface, for example, as though they’d drifted in by accident. Often the canvas is roughly cut or pierced or adorned with little three dimensional objects or sticks. On occasion, in what he calls “frame paintings”, there is no canvas but a piece of semi-transparent polyester, allowing us to see through to the stretcher. Subject matter, including landscapes, marine scenes, interiors, still life and even photographs or paintings by others, are treated in various modes of representation and abstraction, often within a single composition. Raw wooden frames are treated as pictorial components rather than decorative enclosures.

There is no consistent, predictable style. In a way, he is the opposite of Sean Scully. Where Scully’s trajectory has followed the development of a unitary, assertive, resolute, pared down visual language that defines his artistic identity, James’s determination is directed towards keeping the conversation open, towards following any lead he happens upon in whatever direction it might take him. His lack of assertiveness doesn’t mean absence of ambition. As he commented once: “I am interested in art of deceptive modesty.” When a version of the current Kerlin show was held at Glasgow’s CCA earlier this year, it was aptly titled Long Game.

Hannah Brown and Cara Thorpe take complementary approaches to making pictures though both produce fascinating works. Brown makes calm, muted landscapes, all sited within Victoria Park in East London. They have the tame, carefully tended air of parkland about them, but she edits out any visitors who happen to be there, human or animal, as well as any urban trappings, so they appear empty and still. And a little uncanny: she edits the light as well, substituting even grey skies for whatever happens to be there, so that there is a subtle mismatch between the skies and the light that falls on the foliage, grass and water. Born in Salisbury, she studied sculpture at Central Saint Martins and the RCA, London, and she makes sculptures as well as painting, in a thoroughly different vein.

Thorpe works through a process of addition and subtraction, building up and sanding away layers of acrylic paint “until the images start to suggest themselves”. Often, her paintings recall that moment when, in the era of analogue photography, an image starts to appear in the tray of developer fluid. They have a retrospective, distanced, dreamlike, often elegiac quality. Small in size, they are visually dense and richly evocative.