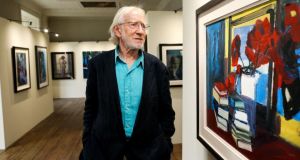 Brian Ballard at his retrospective at Rathfarnham Castle 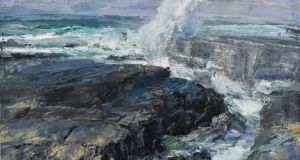 Brian Ballard was born in Belfast in 1943 and became a pupil at Annadale Grammar School in 1954. It was at that time a particularly art-friendly school. He showed an early aptitude for painting and went on to Belfast College of Art and then Liverpool College of Art.

By the time he finished his studies and went to work for the Arts Council of Northern Ireland in the mid-1960s, Ballard was exploring abstraction with assurance and inventiveness. Yet, even apart from the clarity of hindsight, it seems that, looking at these works, something is missing.

Ten years later, Ballard made what could be construed as a retrograde move back to representation. And not just representation: from that point to this, he has embraced what Marianne O’Kane Boal described as his “trinity of genres”: the well- established academic categories of landscape, the figure and still life.

Conservative fare, one might think, and it’s easy to classify Ballard as a conservative artist. But what comes across in this compact touring retrospective is the tremendous, engaged vitality of his painting. A couple of decades can be cruel to a work of art, but Ballard’s works look better and better, probably because they are so true to the moment.

The terse urgency of what we see in the finished work is not an indication that the artist has taken a shortcut, but rather that he has pursued the composition doggedly, even relentlessly, until the point of resolution, and then had the good sense to stop.

Ballard has commented to the effect that it takes a crisis to conclude a painting, which is a good way to put it. Once you’ve come through the crisis, let the work take its chances out in the world. Don’t try to embellish it with fake charm.

That’s certainly true of his few portraits, which makes them all the more valuable, both as paintings and as documents. Frank Auerbach’s work is a very good point of reference; so too is that of Georges Braque, who pioneered cubism. There is a calm, reflective air to Braque’s paintings and a mellow, nocturnal quality to his palette.

Both characteristics are evident in Ballard’s work, even though it is true that he occasionally likes to (very effectively) use expanses of bright, vibrant colour. And, occasionally, motifs in the paintings hint broadly at difficulties and tribulations.

Rathfarnham Castle is a great venue. The only minus is that, while the setting is superb, the work is hung mostly on modular screens. It is a pity that it could not all have been hung directly on the walls. A generously illustrated hardback publication, with a text by Marianne O’Kane Boal and insightful reflections by Ciaran Carson, is published by Gandon Editions at €27.95.

Writing about Chris Martin’s paintings, friend and fellow artist Peter Gallo notes the “signature ‘mash-up style’ of a painter who works at such great speed and with such vast output”. He situates Martin historically as being part of, and galvanised by, the demise or break-up of modernism.

After dropping out of a Yale undergraduate programme in the mid-1970s, Martin moved to New York, “eventually taking up a day job as an art social worker”. Thus grounded, the work he made in the evenings reflected a complex, pluralist world far removed from the chilly reductionism of minimalist abstraction.

It was and is, Gallo suggests, a new way to do representation, allowing everything that modernism suppressed to come bubbling to the surface.

It certainly appears that the works in the Douglas Hyde were made at speed, as though Martin was surfing breaking waves of energy, weaving and improvising, trying to stay upright until the inevitable end.

Apart from roughly applied paint, collage is central: pages from magazines, vinyl records, pieces of packaging and a serious quantity of glitter. Individual compositions hang mostly on loose structural patterns. They are never less than engaging but they are also inconsequential in their casualness.

All that energy doesn’t quite add up to anything; in fact, it dissipates. Commentaries on Martin refer reassuringly to his enthusiasm for and knowledge of modern and contemporary painting. Gallo sees him as having been ahead of his time. And it is true that his paintings do reflect a wired, ADD world of endless diversion and the briefest of attention spans.

No Real Horizon draws its title from Derek Mahon’s poem The Lady from the Sea, in turn taken from Ibsen’s dramatisation of a Scandinavian ballad. Mahon follows Ibsen’s version quite closely. In it, the title character, “born in a lighthouse” but now married and landlocked 10 miles inland, rebuffs the advances of a seafarer from her past, a personification of the open sea and endless possibility. The contained inland world offers “no real horizon”, he tells her.

In his paintings of Mayo and Sligo, Teskey alternates between inland and coastal locations. The larger works are generally devoted to the latter and given over to the slow, rhythmic battering of rocky shore by turbulent sea. The spare palettes and scoured surfaces of these paintings, with their scraped bands of pigment, echo the remorseless, elemental nature of the struggle.

An exception is Claggan Island, which goes for what Teskey calls “the ethereal” – the enchanted, inviting, Hy-Brasil quality of sunlight dancing on sand and water.

As it happens, he is more free and fluent in the smaller, mostly inland works on paper, especially the four outstanding Carrowkeel studies. Where Claggan expresses an affinity with the work of Mary Lohan, the Carrowkeel pieces engage in a lively dialogue with the landscapes of Barrie Cooke and Nick Miller.