Visual Art round-up: Back to the DeLorean, and on to the future 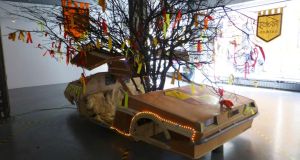 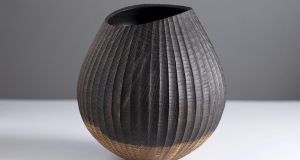 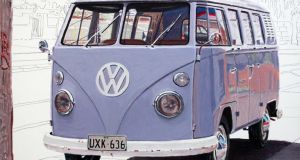 Aoibheann Greenan crams a lot into Temple Bar Gallery, including an apparently life-size wooden mock-up of the gull-winged DeLorean DMC-12 sports car, a thorn tree, a garishly decorated banner, sundry other devices and a lavishly attired mannequin. There’s even a soundtrack, but it still looks as if something is missing. That could be the live, performative event that takes place on the evening of April 30th, marking Bealtaine.

Without the live happening, DMC (Dunmurry May-Day Conspiracy) presents itself as diorama, recreating the sacred space of a fictional secret society, the Draoithe Dún Muirígh or Druids of Dunmurry. Greenan posits a history for the society centred on the location of the DeLorean manufacturing plant in Northern Ireland, suggesting that the druids gathered to protest about the destruction of a lucky thorn on the site.

The DeLorean chronicle has acquired a mythological status in recent Irish history, and in her installation Greenan ups the ante by throwing in superstitions about a fairy tree and druidism. As with her installation at last year’s Futures exhibition in the RHA, she’s dealing with an exaggerated, contrived exoticism, the way cultures are shaped into heightened caricatures of themselves to woo visitors in search of colourful holiday experiences and, for that matter, to please locals who want to buy into the myth. This time around, the location, in the heart of the tourist trap that is Temple Bar, underlines her point.

She can certainly put together atmospheric environments. It is, however, puzzling that the core elements of DMC refer to and conflate two separate projects by Sean Lynch. They are his extensive DeLorean Progress Report, which also involved the fabrication of a facsimile DMC-12, and Latoon, his 2006 video about the efforts of folklorist and storyteller Eddie Lenihan to stop the destruction of a whitethorn bush in the path of a road scheme in Co Clare in 1999. It’s not clear whether Greenan is deliberately alluding to Lynch’s work or just recycling some of the same material. After all, DeLorean attracts a lot of attention. The car famously features in Robert Zemeckis’s Back to the Future, and DeLorean was the subject of Turner Prize-winner Duncan Campbell’s film Make it new John, which formed part of Imma’s recent show of his work. Until June 20th, templebargallery.com

Taylor Galleries was established in 1978, but its lineage stretches back to the Dawson Gallery, originally founded by Leo Smith in 1944. Its current stable of artists includes many established figures, including Camille Souter, Sean McSweeney, Anne Madden, Martin Gale, Charles Tyrrell and Mary Lohan. In the recent past, under the title Lacuna, the Taylor has also featured a strand of group shows featuring mostly younger, emerging artists.

In this, the third in that series, two artists, Sabina Mac Mahon and David Quinn, curate it. Their own work is not at all alike. Mac Mahon’s meticulously researched projects blend cultural history with invention in illuminating and humorous ways. Quinn makes series of abstract paintings with a concentrated, pared-down aesthetic. Together they bring a diversity of practical experience to their curatorial collaboration.

With two floors and four generously proportioned rooms, the Taylor is capacious, and the six artists in Lacuna have three rooms and ancillary spaces at their disposal. That amounts to a substantial group show. It’s also a subtle one. Everything is relatively muted and calm. There isn’t a prima donna in the bunch, but everyone has a distinctive, considered voice. That includes the two painters, McDonald and O’Connell, even though they both work in varieties of a considered, thoughtful vein that is very much of the moment. Approach this show with a bit of time and an open mind and you’ll find it immensely rewarding.

The remaining gallery is occupied by 12 studies of classic cars by John Doherty, who is best known for his photorealist paintings of vernacular Irish shop and garage fronts, plus buoys, boats and the dockland environment. They are not showroom idealisations but meticulous accounts of real machines, lovingly maintained but showing signs of their age and history. Doherty has made sympathetic portraits of technological products that transcended their functional use, inspiring affection and admiration. Until May 9th, taylorgalleries.ie

Spin is a treat. The gallery is entirely occupied by woodturned vessels, made with expertise and ingenuity. Woodturning is a popular craft discipline whose end products can be dull and predictable. But Flynn, like Emmet Kane (whose work is on view at the National Museum, Collins Barracks), is one of a select few makers who bring a sculptural sensibility and inventive imagination to the process.

Flynn is strong on pattern but his work could not be described as ornate. He is very much in tune with the character and grain of the wood he’s using, and he opts for simple, oval, organic forms. The patterns enhance or define the forms and the grain. Sometimes pattern would be superfluous. His eucalyptus vessels have a papery, wavy lightness. They seem to have just unfolded from the tree.

The tonal range runs from palest of pale sycamore to fumed and ebonised oak. A couple of fluted vessels, with rhythmic bands of vertical grooves, are particularly eye-catching. My least favourite pieces are the Footed Vessels, which are beautifully made and look very well, but occasionally – especially when ebonised – can suggest the heaviness of iron pots, which works against the buoyancy of the form. It’s a debatable point, though, because overall Flynn’s judgment is impeccable. Until May 14th, oliversearsgallery.com