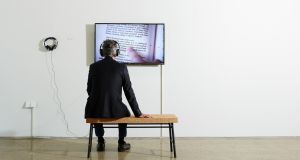 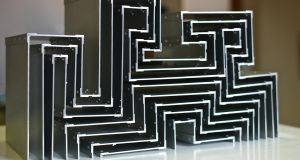 An untitled work by Corban Walker 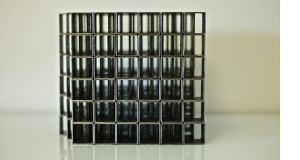 An untitled work by Corban Walker

Perhaps more than any other individual, James Joyce invented the idea of the work of art as an unimaginably dense, consciously constructed assemblage of culturally coded meanings, waiting to be unpacked and analysed by anyone with the time, knowledge and interest. In the case of Ulysses and Finnegans Wake, that turned out to be wave after wave of generations of readers and scholars, academic and amateur. You could say he was getting his retaliation in first, anticipating the aims and methods of structuralist and post-structuralist theorists in terms of dealing with a text – any text – by deconstructing it.

Their explanation of a work is found by a kind of reverse engineering, picking apart its cultural, philosophical and political assumptions on the basis that they are all social constructs at heart. The true nature of a work’s underlying assumptions were probably unknown to the author or artist, but Joyce turned the tables by quite consciously foregrounding the constructed nature of his fiction. In time, the idea of a work being a consciously coded construct came to dominate the visual arts, often by means of deconstructing a source text, image, event or phenomenon, teasing out and critically scrutinising its underlying, unstated assumptions.

Elaine Byrne has pursued exactly that methodology in the recent past and now, in Whenceness, she takes on a section of a work by Joyce, joining the ranks of those who have devoted themselves to unpacking the box of tricks that is Ulysses. It’s obviously a tempting thing to do, but caution is advised. As they say, you can’t con a conman. Joyce is not your average patsy when it comes to the deconstructionist’s sleight of hand. He probably got there first.

In fact that’s exactly what emerges when she investigates a passage from the “Cyclops” episode, involving Bloom’s imagined departure to Hungary, complete with a formal public presentation of gifts and an Irish pipe band playing The Rakoczy March. In Byrne’s video of that title, two uilleann pipers grapple with playing the tune, “once the unofficial national anthem of Hungary”. Predictably enough, it’s not suitable for transcription to the pipes, but they do make a pretty good job of it, enough to muddy the artist’s contention that “music doesn’t cross all cultures”.

For a second video, Pure Codology, Byrne enlists two talking heads, and here Joyce has the last laugh. One expert points out that he built a linguistic joke into the text that remained dormant for years as Hungary entered a devastating phase of its history and Ulysses remained unread and unstudied. The communist regime that eventually emerged took a dim view of Joyce and his work, although Bloomsday is now falteringly marked. Joyce’s in-joke was eventually outed: the name of Bloom’s destination in Hungary is an invention that translates as constipation following the consumption of improbably vast quantities of veal goulash. Very Joycean.

Byrne relishes the layers of wordplay, and finds a graphic analogy for it in a fine series of collages centred on newspaper pages from June 16th, 1904, and incorporating three sentences that Joyce edited out of the “Cyclops” episode. Byrne’s foray into Joyce is agreeably ingenious and entertaining. She doesn’t emerge with any startling conclusions or revelations, but she pays her respects with flair and style.

Corban Walker works to what he calls “corbanscale”, anchoring a view of the world to his own stature, or a height of about 4ft. His father was the modernist architect Robin Walker, and his mother the critic Dorothy Walker. It’s fair to say that the interlinked languages of modernist architecture and minimalism have been central to shaping his vision. He works in a diversity of forms, including sculpture, photography, drawing and installation, with a range of materials, including stainless steel, aluminium and other metals, glass and acrylic. His Hillsboro show adds clay and an artist’s book to that list.

Given the year that’s in it, one might assume that the post office of the title is the GPO. Actually there is a nod towards the year, and the GPO, but the post office is specifically Mies van der Rohe’s post office building in Chicago. Closely identified with steel-framed high-rise blocks, Van der Rohe also surprised occasionally by not doing what you might expect. The New National Gallery in Berlin is one example, the Chicago post office another. Both eschew multiple storeys. Presumably Walker was struck by the way the single-storey glass and steel post office building dominates its high-rise surroundings by being different.

He has made a series of drawings by using crushed coloured pastels with photographs, published as a book in an edition of four copies with two artist’s proofs. Then there’s a leap to the other body of work that makes up the show, sculptures made during a residency at Atelier Calder in Saché, France. Walker has long made modular, constructed sculptures that depend on the multiple arrangement of uniform elements. What’s especially striking about this recent work is a play on the notion of heavy materials and structural fragility.

That’s particularly evident in a grid-based arrangement of rough clay blocks, 25 to a square side, which seems to teeter alarmingly. More precisely aligned but still unsettling is a 36x36 construction of open-ended tubular metal blocks. Walker likes the patient exactitude of making with a slight, inbuilt uncertainty. The tension arising from these two qualities gives the whole exhibition a nervous, edgy energy. They also create cumulatively complex spaces and patterns that interact unpredictably with the containing spaces and the light, making us more alert to the way we negotiate space.