Mane frame: equine art in the Year of the Horse

From ancient cave paintings to modern images, the horse and its representation have remained central to art and artists 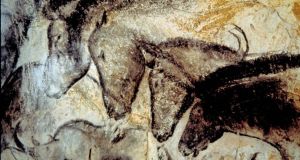 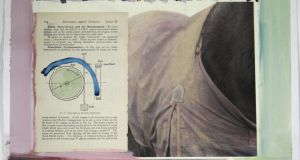 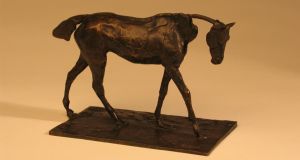 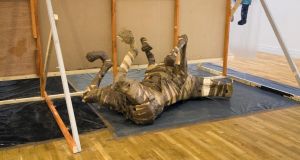 Everyone Knows a Horse Sculpture No 1 by Nevan Lahart, courtesy of the Kevin Kavanagh Gallery

From cute cats and winsome dogs, to large-eyed cows and rearing horses: caught between the over-sentimental and the purely representational, it can be hard to find a place for animals in contemporary art, and no animal, it seems, has fallen further from grace than the horse.

But as January 31st brings in the new Chinese Year of The Horse, an exhibition at Dublin’s Gallery of Photography and a series of events at the Hugh Lane Gallery are taking another look at our relationship with these animals through the eyes of past and present generations of artists.

Once a staple of painting, horses have galloped through art history. There they are on the walls of the famous caves at Lascaux, painted about 17,000 BC. Even earlier, horses appears in the Chauvet cave, also in France, dating from about 30,000 BC. Despite the almost unimaginable gap of millennia, these horses are raw and real, energetic and exciting. Whoever the artists were, horses were obviously central to their lives, survival, beliefs and dreams.

Despite this centrality, it can be hard to depict animals well. Maybe there’s too much emotional content in the gaze of a noble horse (or a cuddly dog) not to end up with something slightly sickly, fluffy, and frankly embarrassing to the eyes of a contemporary art audience.

Guilty secret
Since the elegant age of horse painters that spanned George Stubbs in the 1700s to Munnings 100 years later, horses have become something of a “guilty secret” in the contemporary art world. They were still there in the early days of modernism, obsessing the likes of Wassily Kandinsky, Franz Marc and Marc Chagall, who painted poetic equine symbolism into their colourful and often dreamlike canvasses. But minimalism, abstraction and the internal combustion engine then banished horses from all but the edges of art and life.

The Irish connection to horses is obvious. We dominate the world of horse racing and that spills over into a passion among some for horse art that looks like horses. John Magnier, owner of the Coolmore stud, has the most important private collection of works by Alfred Munnings in the world, while Tony O’Reilly and JP McManus also collect horse art. Meanwhile, artists including Nicola Russell, Peter Curling, Tony O’Connor and Paddy Lennon are in demand as artists who make marvellous realistic equine portraits.

But what about more cutting-edge art? What about art that aspires less to look exactly like a horse, but instead attempts to make connections to what horses might mean to us in a world where boy racers dream of turbo-charged cars instead of galloping steeds, and horses are an expensive luxury rather than a fact of life?

Urban horses
Perry Ogden’s Pony Kids series of photographs, shown at the Hugh Lane in 1999, looked at the lives and loves of a generation of inner-city children who still felt the thrill of proximity to urban horses. In the accompanying book, which is available from the Gallery of Photography bookshop, the “pony kids” talk about the relationship. “They call us urban cowboys. Cowboy is a bad word for to use. We’re really natives, we’re really Indians, you know what I mean; we’re all Celtics. Horses is completely in our blood,” says one.

Horses may be in our blood, but that incredibly close connection that existed was cut off, almost overnight, for most people, just a generation or two ago. You may not have been a pony-mad girl (or boy), but many Irish families would have had a horse or pony in the background, as transport or to work the land. But suddenly they were gone, and, more recently, the land itself has been swallowed by golf courses or fenced in.

Ask a range of Irish artists about horses and you will discover that many of them have a horse or two lurking in the background – on canvas at least. In 2011, I put together a pair of exhibitions with Patrick Murphy of the RHA for the Kinsale Arts Festival: The Horse Show and The Point to Point. This included Nevan Lahart’s life-sized sculpture Everyone Knows a Horse Sculpture #1, which captured the movement of a rolling horse so well, even though it was made from cardboard and parcel tape, that I asked the artist how he’d done it.

“Ahh, I’d always wanted to be a jockey,” Lahart said. “Then I had to choose: that, or be an artist.”

Meanwhile, Martin Gale, whose work The Grey will be on show in the Gallery of Photography, had such a strong background in horses – his father worked for the Jockey Club – that he spent years avoiding painting them.

Like Eithne Jordan’s City Stables, which is also in the exhibition, The Grey manages to get both the form and the sense of “horse” absolutely right.

Not table-shaped
This isn’t always easy, as one of our leading sculptors, the late Conor Fallon, explained in a passage of his Thoughts on Sculpture book, entitled “The Horse’s Arse Story”.

There, he explained about “how to handle the problem of the horse’s arse”, which is essentially one of realising that horses aren’t shaped like tables, with a leg at each corner. In a particularly delicious passage, he describes being caught applying the horse’s arse test to a Melanie le Brocquy sculpture in the Taylor galleries. Fortunately, the sculpture passed.

Projected in one of the larger spaces in the gallery, Simon Reilly’s video Mind’s Eye beautifully captures the heart-breaking difficulty of trying to get what really is “horse” about horses when drawing them.

Instead, Christopher Barr’s brilliant photographs of Travellers’ horses focus inwards, turning their bodies into abstract forms. As the artists in the exhibition show, contemporary art can get beyond the sentimentality and the form of the horse, to reach something significant, something that touches on the reasons horses have been such a staple of art.

They were perhaps the first image man or woman ever painted, and are still relevant today. Here’s to the Year of the Horse.

Events at the Hugh Lane Gallery include lectures and coffee conversations on subjects ranging from Francis Bacon and Eadweard Muybridge to Jack Yeats. Equine art on show include works by Degas, Barry Flanagan, Perry Ogden and Jack Yeats. See hughlane.ie