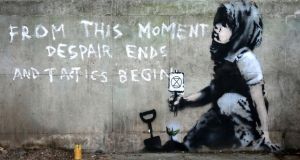 A Banksy collector and expert believes a mural that appeared at Extinction Rebellion’s London base overnight is an authentic piece by the British street artist.

John Brandler, who owns a dozen pieces by Banksy, is convinced the artwork – which features the slogan “From this moment despair ends and tactics begin” next to a young girl sitting on the ground holding an Extinction Rebellion logo – is an original because of its execution and theme.

“It’s a topic that he would support,” he says, “and it’s a continuation of the Port Talbot piece that appeared in December 2018. The name in the corner is not important: the signature is the work. And this is a Banksy. It’s a wonderful statement and a beautiful piece.”

The site where the work appeared has been occupied by climate activists since protests began in the British capital almost two weeks ago. Westminster council confirms that the work is being investigated but has not been authenticated yet.

“If we don’t act now, what happens? That’s what this little girl is saying. Now is the disaster; now is the time to act,” Brandler says. The Marble Arch piece “is similar to the boy with the flag during the 2012 Olympics... The only thing I don’t like is that the top of the girl’s head is the same height as the concrete block. Visually, it jars.”

Brandler says the Marble Arch piece is much more convincing than another possible Banksy that appeared on a primary-school wall in Kent, to the southeast of London, over the Easter holidays. “It was obviously not one,” he says.

Banksy has not confirmed the Marble Arch painting is legitimate, and his press team did not respond to a request for comment. – Guardian