As Notre Dame burned, so too did a part of us

Jennifer O’Connell: You don’t have to have lived in Paris to have had a visceral reaction to seeing Notre Dame gutted 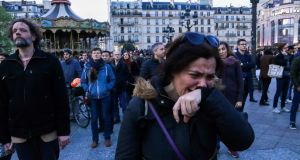 Notre Dame burned. Those are words that belong to a metaphor, or the opening line of a novel, or the plot for a post-apocalyptic zombie film. Those are not words that should be heard in a news bulletin on a wet Monday night in April.

Notre Dame burned. We sat in front of our televisions or with our phones, and watched as the flames consumed that towering ambition, that history, that soaring evidence that humanity wasn’t always so small-minded and sordid.

When the spire fell, it felt like a replay of something we had seen before, sitting in front of different television screens, 18 years ago next September. The loss of human life, the premeditation, and the terrorism made the twin towers incomparably horrifying.

There were no deaths in the Paris flames, no terrorist attack, but still, there was something affronting about watching the collapse of Notre Dame.

That the destruction “united us all in dismay” is one of those ragged, meaningless clichés newscasters reach for at a time like this. But in this age of online outpourings, it seemed to mean something. I went on Instagram and posted a photo I took outside Notre Dame 18 months ago. When I refreshed my feed, Barack Obama had done the same. So had Anne Hathaway, and Lin-Manuel Miranda, and countless friends from San Francisco to Sydney.

I texted my husband, disbelieving and bereft at this assault on a piece of our shared history. He texted back, “How bad is it?” Bad, I said. The spire is gone. He came home and we sat and watched the footage together in mute horror.

I lived in Paris for a year; he was there for nearly six. It was in Paris that we met, in the weeks before Mitterrand died, and his requiem mass was held in Notre Dame.

It was another time of unrest and civil strikes in the city, but we barely noticed. We were too busy hunting out untouristy backstreet cafes and quiet squares and sitting up late in his attic studio, listening to Alanis Morissette, Portishead and Oasis on repeat on the battered CD player. Notre Dame was part of the backdrop to those walks, to our Sunday brunches, to the late night, stomach-churning taxi rides home.

When the snow fell that December and the city became snarled up in strikes, I wrapped myself in two coats and walked to work. It was during those long hikes that the city got into my bones.

Often, I took an even longer route than necessary, from my apartment in Bastille along the river to Porte Maillot, passing the booksellers lining the quays, with Notre Dame towering above the trees. I affected the kind of nonchalance with which Parisians regard their city’s extravagant beauty, but I was never nonchalant. I knew how lucky I was; even at 20, I knew it wouldn’t always be like this. And so it proved. These days, my walk to work takes me past a Tesco and a TK Maxx.

Our four-year-old didn’t understand our dismay as we watched it burn. “Are there people inside?” she asked. When I said there weren’t, she patted my hand and reassured me that someone would fix it. But I felt the loss on her behalf: we hadn’t yet got around to taking her or her siblings to Paris. They might one day see Notre Dame, but it won’t be the same Notre Dame Victor Hugo saw.

You don’t have to have lived in Paris to have had a visceral reaction to seeing Notre Dame gutted. You don’t even have seen it for yourself to have felt the sadness and the shock as the spire swayed and snapped in the flames. “Decapitated,” someone standing outside the cathedral said.

It might be primarily France’s tragedy, but on Monday night, it felt like we all lost something. We mourn the destruction of great monuments like we mourn the deaths of iconic people – Princess Diana, Robin Williams, Prince, Bowie. But, on some level, we are primed for even the untimely deaths of public figures we admire and love. Our great structures are supposed to outlive us. They are meant to stand above our petty preoccupations and politics, a reminder of better times past, and better days to come.

We need those monuments more than ever now, in a France divided, and a Europe on the brink.

Part of the appeal of Notre Dame is the knowledge that it was commissioned 850 years ago, a foolhardily ambitious project the Bishop of Paris, Maurice de Sully, who must have known he would never live to see its completion. In the event, it took 200 years. Modern leaders don’t think like that; they’re barely able to muster the ambition to protect a planet that will outlive them.

It was all over in a few hours

It is easy to romanticise the past – and there presumably wasn’t much romantic about medieval Paris for the vast majority of the population who lived there. But it was still a time when art and architecture wielded the kind of influence reserved today for billionaire property developers, software engineers or reality TV stars; a time when humankind’s most memorable achievements soared 200 feet tall, instead of confined to a four-inch screen and measured in shareholder value.

The French President, Emmanuel Macron, has promised the cathedral – which survived the French Revolution, two World Wars and two previous fires – will rise again. “This is the place where we have lived all of our great moments, the epicentre of our lives. It is the cathedral of all the French,” he said.

Appeals had recently been made for funds to help preserve the cathedral; now, of course, those funds are pouring in, with pledges of hundreds of millions of euro coming from two of the country’s richest tycoons. Two years ago, it was reported that the cathedral’s limestone was crumbling and some of the gargoyles had to be replaced by plastic. The French state – which, in one of those archetypal French compromises, owns Notre Dame – had been spending €2 million a year on its upkeep. That seems a shamefully modest outlay, especially when weighed against the 13 million visitors a year who come to see it.

On Monday night, it was all over in a few hours. The flames began licking at the medieval beams inside the roof at around 6.30pm. By 11 pm Parisian time, the news came that the structure had been “saved and preserved as a whole”, the fire department said.

But the spire is gone, and what remains of the cathedral is vulnerable. It will be rebuilt, but it will never be the same. It should have gone on as it was, a celebration of beauty, and a symbol of permanence, at a time when the future of Europe has never felt less certain.