It’s not great art, but it is good mythmaking

Seán Keating wanted to establish an authentically Irish school of art. It’s debatable how successful he was, but there’s no denying the importance of his paintings to our history 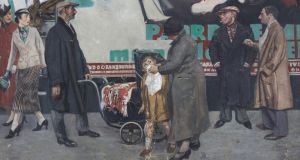 ‘Sacred and Profane Love’ by Sean Keating (1937), reproduced with kind permission of a private owner and the Keating estate 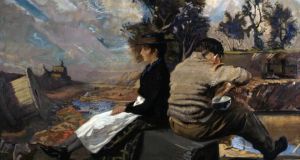 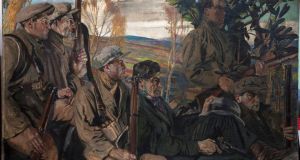 ‘Men of the South’ by Sean Keating (1921-22), Crawford Art Gallery, Cork; courtesy of the Keating estate

Two incarnations typify popular images of Seán Keating. In one he is the quintessential painter of the Irish Free State, boldly mythologising the War of Independence, the hardy islanders on the western seaboard and the heroic industrial endeavour of the Shannon hydroelectric scheme. In the other, some decades later, he is a stern, bearded ascetic, bemusedly mocking the pretensions of modern art in a television interview with Colm Ó Briain. Fans of the first incarnation are quite likely to approve of the second, and critics of one are likely to disapprove of the other as well.

In her new book on the artist, Éimear O’Connor aims to present a more complex, revisionist portrait. Although Keating has been perceived as a diehard conservative flatly opposed to modernity, she argues, in fact he was in favour of modernisation, critical of governmental and clerical failure, and egalitarian in his sympathies.

One of 11 children, Keating was born in Limerick in 1889 to Joseph and Annie Keating. Four of his siblings died in infancy. His elder brother Paul was ordained a priest in 1918 but died a year later in the influenza epidemic on his first posting, in Brisbane. Never a zealous pupil, Keating played truant from St Munchin’s College and hung around the waterside, learning French from the Breton fishermen whose boats were moored there.

Although Keating remained a staunch Catholic throughout his life, with a fondness for the Latin Mass and its rituals, O’Connor notes that he was wary of clerical involvement in the State. He was also more than vague about his history, tending to “proletarianise his background”. His mother, who was a dressmaker, and his father, who was a bakery manager, lived through turbulent times in Limerick and worked hard to keep things together. Keating spent much of his teens “fishing, smoking, talking”, and hunting by night: “It wasn’t the killing that was exciting, but the chase.”

After his mother fixed him up with a job at Cannock’s department store, he had an epiphany: he would go to art school. His evident talent earned him a stipend as an art pupil teacher. From the beginning he was taught in the South Kensington method, which was characterised by the historian John Turpin as not so much art education as “art teacher education”. On an initial visit to Dublin he met William Orpen, whom he idolised and befriended, and who encouraged him to apply for a three-year scholarship to Dublin Metropolitan School of Art, the precursor of today’s National College of Art and Design. Subsequently, he spent 1915 in London working as Orpen’s studio assistant.


Authentically Irish
Keating first visited the Aran Islands in about 1913 and returned regularly thereafter. He was very taken with the appearance and character of the islanders, and they largely inspired the idealised Gaels who populate many of his canvases. This was part of a conscious attempt to establish an authentically Irish school of art, with its own style and iconography. He features as a model in Orpen’s ambitious, though very odd, allegorical painting The Holy Well , set against a stylised version of the Aran Islands. Unfortunately, Keating was greatly influenced by the work’s arch theatricality in devising his own allegorical pictorial method.

Through Conradh na Gaeilge he met May Walsh, a young Kildare woman of independent temperament and left-wing socialist views, who was agnostic. They married in 1919. Working at the time as secretary to Hanna Sheehy Skeffington, May remained politically active throughout her life and was an advocate for women’s rights. Though she later made a point of saying that she did not influence her husband’s work, it seems likely that there was some overlap of concerns.

Men of the West , exhibited in 1917, was a benchmark painting for Keating. Drawing on the iconography of the western seaboard, and with the artist and one of his brothers as models, it vividly mythologises Irish rebels. Its sequel, Men of the South , is a better work and a key painting in Irish art history. Painted in difficult circumstances during the War of Independence, it is more realistic in its depiction of hardened, ruggedly unkempt guerrillas. It was drawn directly from life and, apparently, to a large extent from Keating’s photographs of members of Seán Moylan’s North Cork Brigade.

O’Connor points out that, contrary to popular belief, Keating was not commissioned by the Electricity Supply Board to document the huge Shannon hydroelectric scheme at Ardnacrusha. He embarked on the project, which lasted from 1925 to 1929, on his own initiative because he approved of the controversial undertaking. Critics, including the Catholic Church, attacked it as a waste of money, but Keating saw it as vital for national development.

Never quite at ease as a landscape painter per se, he nonetheless did something exceptional in his Ardnacrusha and, later, Poulaphouca series, the latter dealing with the building of the hydroelectric generating facility on Blessington Lake in Co Wicklow. He meticulously and objectively detailed the large-scale industrial alteration of the landscape, concentrating on the engineering processes involved. In fact, it is striking that landscape is always invested with cultural meaning in his work, including his western seascapes. It is never simply an idealised vision of untouched nature.

True, his more contrived, allegorical pictures of the hydroelectric schemes are more awkward than the straightforwardly documentary images, but they don’t detract from his remarkable achievement. Both sets of work are in the collection of the ESB. It’s worth noting that Keating travelled relatively little outside Ireland, but one excursion, his voyage to Algeria on Irish Hazel under the auspices of Irish Shipping in 1947, engendered some fine painting and enlivened his palette.

He was closely involved with two institutions throughout his working life: Dublin Metropolitan School of Art-National College of Art and Design and the Royal Hibernian Academy. He was elected to the RHA in 1923 and later served as its president, a post from which he resigned in 1962, reputedly unhappy with the artistic direction of the organisation.

The saga of his teaching career is labyrinthine, with prolonged, bitter infighting and politicking involving his superiors, colleagues and the Department of Education. Against the odds, Keating survived several concerted attempts to get rid of him, including a strong recommendation in the confidential section of the 1927 French report, a review of the art school. He was a professor from 1934 and, although he was due to leave the National College of Art and Design in 1952, he stayed six further years and relinquished his studio there only in 1962.

A substantial part of his income came from portraiture, but he was an uneven portrait painter, as many examples reproduced in the book attest. Brian Kennedy has pointed out that some of his best portraits are of people close to him, often in group compositions. And there are some really noteworthy successes, including several studies of May. Another outstanding work, The Tipperary Hurler , an imposing painting, is largely based on the former IRA man Ben O’Hickey, who bore a close resemblance to the renowned John Joe Hayes.

Keating was dragged into the public dispute over the Hugh Lane Gallery’s 1942 refusal of Georges Rouault’s Christ and the Soldier . As a member of the gallery’s advisory committee, he said nothing publicly in the early stages of the controversy, O’Connor writes, until comments made in what he took to be a private phone conversation with either the then editor, Robert Smyllie, or deputy editor, Alec Newman, of The Irish Times appeared in print. The Rouault was, he was reported as saying, “not a work of art”; it was “naive, childish and unintelligible”. A lively correspondence ensued, Myles na gCopaleen chipped in and relations between Keating and Louis le Brocquy, previously friendly, cooled permanently.

O’Connor implies that there was something unwitting or ambivalent about Keating’s identification with the cause of artistic conservatism, which saw him lumped in with a broader, politically and religiously conservative camp, yet many of his statements tend to suggest otherwise. When he wrote approvingly of the artist as a rebel, he seemed to have himself specifically in mind as the rebel of choice, and to believe that others should conform to his ideas.


Polarised opposition
A simple reading of Irish art history in the first half of the 20th century suggests a polarised opposition between conservative representation and modernist abstraction, with Keating firmly in the former camp. The demise of modernism allows us to revisit this history and reassess the virtues of Keating’s apparent stylistic conservatism in the light of his real, passionate concern for contemporary historical issues. Such is O’Connor’s case.

The problem with it is the inherent limitations of Keating’s work, even considered in purely representational terms. His pictorial allegories are interesting historical documents but they are not great art, and much of his work leans towards the propagandist simplicity of Soviet social realism. That certainly doesn’t take one whit from the core of his achievement, which is considerable: a substantial body of fine paintings that are outstanding in themselves, helped create the iconography of the emergent Irish nation, and are an essential part of our history.