Artists’s response to ‘The Hay Wain’ is not nostalgia but modernity. Plus Stephen Loughman is inspired by WI postcards and Brian Fay explores time and change 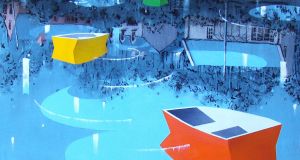 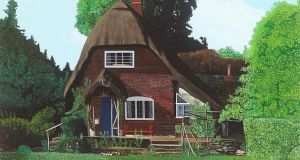 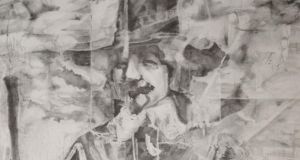 Detail from Hidden Figure in X-ray of Rembrandt Portrait of Frederick Rihel on Horseback, by Brian Fay

Several of the paintings in Graham Crowley’s new show were inspired by a perennially popular work in the National Gallery London, John Constable’s idyllic rural scene The Hay Wain. In Constable’s composition, the horse-drawn cart of the title is making its way through shallow water by a cottage – Willy Lott’s Cottage – close to Flatford Mill on the Stour river in Suffolk, while haymakers labour in the fields beyond. It is a wonderfully lush, verdant image.

Crowley was born in Romsford, Essex. Growing up in the 1950s, he became familiar with Constable’s painting through the medium of black-and-white reproductions, as was the norm in art books then. (Colour was expensive and rare.) Then he went to study art at St Martin’s in London and had his first look at the original. “I was transfixed. It wasn’t the kind of painting or the sort of experience that I had anticipated. It transcended both.”

From the reproductions, he expected a sober, even dull representation. But in reality the painting is surprisingly big and its surface is incredibly dense and alive. Constable worked from several sketches made on the spot, and in the overall composition he throws waves of light from the broken, cloudy sky across the scene, creating a network of brilliant pools of illumination. He was also well-known for what was called Constable Snow: just before a finished painting was exhibited, he would arrive with his brushes and palette and, after an appraising look, scatter highlights over the surface like glitter.

For Crowley, it was a revelation. By the time he completed his master’s at the Royal College of Art in 1975, he was an abstract painter, but by the end of the decade, based in London, he had moved into representation. He began to make frenetically busy urban compositions, rooted in the real world but with a soaring, magic-realist quality, their twisting, labyrinthine spaces illuminated by shafts of intense light. Subsequently, packed floral still lifes were also busy, but more sparing with colour.

Then he moved to west Cork, and the immediate rural landscape appeared in his paintings, not least the electric blues, yellows and pinks of the houses, startling in a subdued setting. Two years ago he moved again, to Suffolk – Constable country – where he was drawn to the site of The Hay Wain. Willy Lott’s Cottage is still there, much as it was, a heritage tourism destination. The cottage is at the centre of Crowley’s paintings, which recall his initial wonder at seeing Constable.

Like Constable, he depicts not a nostalgic fantasy but modernity. Magic has, he feels, crept into the place, which is “simultaneously mythologised yet remains real”. His work captures that quality and much more.

For his new paintings, Stephen Loughman draws on a number of postcards from many hundreds produced by branches of the British Women’s Institute (WI) in the late 1970s and early 1980s. The artist is best known for his deadpan studies of vacated film sets. Rendered with studied neutrality, these detailed views are curiously unsettling. While often appearing familiar, they are at a remove. An intimation of their artifice comes through: they are real but simultaneously unreal. They might jog our memory, but the characters and actions that dominated them are nowhere to be seen. We are left with empty spaces that we registered subliminally. There is a certain anxiety in the intimation of absent inhabitants, recently departed or imminently arriving, and an unease that may be linked to the darker narrative aspects of the sources.

The postcards the WI produced are an authentic expression of a significant social group. The photographs were taken by WI members and conceived as a celebration of the country, one could even say of Englishness. The intention was to enshrine a nostalgic, positive view. Intrusive signs of modernity, such as traffic jams, motorways, crowds, ugly conurbations, industrial sites or other utilitarian structures, were largely ignored. As with the film sets, there is a sense of contrivance and exclusion. But modernity also has a way of sneaking in and making its presence felt, compromising the simple evocation of a pastoral idyll. The images hint at a world that combines antiquity and novelty and is in need of a new aesthetic, something to replace a nostalgic dwelling in the past. He captures perfectly a contradictory fondness for that past and an appreciation, however unwitting or inchoate, of an emergent future.

In his work, Brian Fay takes on the role of a kind of fine art archaeologist. He considers the art object not as a notional Platonic ideal but in the real world. The passing of time is central to that state. His consideration of the object extends beyond its history of inevitable, progressive decay to its often piecemeal construction. The stages of making, ageing, disintegration and conservation meet in his complex images.

All four drawings in this exhibition are made with pencil. One derives from an infrared photograph of Vermeer’s Girl with a Red Hat and one details the thicket of marks applied by restorers to another Vermeer, Girl with a Pearl Earring. The third unearths the missing man in the foreground group of figures in Vermeer’s View of Delft. The artist painted him then erased him. Fay’s largest drawing is based on the X-Ray revelation of a hidden figure in Rembrandt’s Portrait of Frederick Rihel on Horseback. In each case, the apparent smoothness and integrity of surface and image dissolve into a deep, multilayered tangle of time and change in an intriguing way.