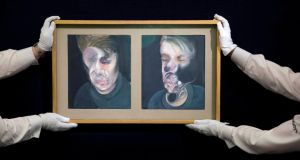 A self-portrait by the Irish-born painter Francis Bacon has sold at a Sotheby’s art auction in London for almost €20 million.

Two Studies for Self-Portrait, painted in 1977 when the artist was aged 68, went under the hammer in a packed saleroom in New Bond Street.

Auctioneer Oliver Barker started the bidding at £10.5 million in an auction which was broadcast online.

Less than two minutes later the painting sold for £14.7 million (€19.8 million). Sotheby’s described it as “a startling painting from one of the greatest 20th century self-portrait artists.”

The painting had a top pre-sale estimate of £18 million (€23 million). Although the price achieved was lower than expected, it still represents a huge increase since the painting last changed hands at auction in the early 1990s when it sold for £353,500 (€474,000).

Neither the seller nor the buyer was named by the auction house.

The painting is a diptych – consisting of two panels intended to be framed and hung together. Each oil-on-canvas panel measures 14 by 12 inches.

Francis Bacon who was born in Dublin and grew up in Co Kildare spent his working life in London.

He died in 1992 and has, in recent years, become one of the most sought-after artists by collectors worldwide.

Two years ago, in 2013 Three Studies of Lucian Freud, a triptych portrait by Bacon of his friend and fellow artist sold at Christie’s, New York for $142.4 million (€114 million) – the highest price ever paid at auction for any work of art.

Art collectors will have another chance to buy a Bacon on Wednesday evening in London when a comparatively “cheap” painting titled Study for a Head – an abstract depiction of Pope Pius XII dating from 1955 – goes to auction at Christie’s in London.

Christie’s said the estimate was “on request” but it is understood to be in the region of £9 million (€12 million).