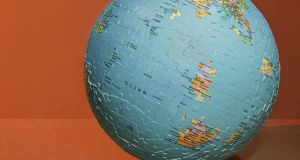 Detail from Globe by Michael Le Belhomme, the main prizewinner of the Solas Prize 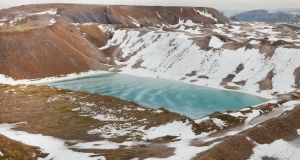 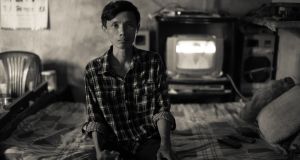 A photograph from Ian Thuillier’s Vietnam 40

There is no big sponsor, but an immense amount of dedication and hard work on the part of the organisers has paid off. The prize attracted a dauntingly large number of entrants, and the current show, featuring work by the winners of the three cash prizes and of an additional seven Irish awards, is extremely impressive. (There is one overlap, Dara McGrath.) The plan is that the awards will consist of bursaries and participation in a major group show at the prestigious Fotohof, in Salzburg, Austria, next year.

Originally the plan allowed for three prizes and three awards, but the judges, crucially including Herman Seidl of the Fotohof, decided that the high standard necessitated a response. Seidl’s fellow judges were Natasha Egan, of the Museum of Contemporary Photography at Columbia College, Chicago; curator Frits Gierstberg, of the Nederlands Fotomuseum, Rotterdam; John Duncan, of Source; and Gallery of Photography director Tanya Kiang.

The main prizewinner (who receives $10,000) is French and deals with landscape. Michael Le Belhomme’s work is entirely based on pre-existing imagery. He takes photographs of photographs, or of drawings. There are, he says, enough images in the world. If you look carefully enough, you can usually find exactly the image you want. His work is playful (he does children’s workshops that are reputedly amazing), inventive and thought- provoking.

Dara McGrath ($1,000), whose preoccupation is the depiction of what might be termed problematic spaces, has been working on Project Cleansweep for several years. In essence, it’s an exploration of the “postmilitary landscape” in the UK; that is, “sites . . . where . . . mustard gas, phosgene and other lethal chemicals were, since the first World War, made, processed, stored, burned and dumped . . . To this day, such sites remain problematic even when they have been returned to civilian usage.” It’s a fascinating rereading of environments that might seem innocuous.

The third prizewinner ($500) is Cambridge-born Mervyn Arthur, whose work veers towards the conceptual-sculptural. He shows work from Screen Test, in which colour-test patterns are used in three- dimensional arrangements, rather like formal abstract sculptures, and photographed. They are elegant and visually sumptuous. All good so far, but it’s fair to say that what is truly encouraging about Solas is the richness of each of the projects by the winners of the Irish awards.

Among other things, these projects document and offer profound insights into contemporary life, often into contemporary Ireland, but not remotely in a provincial or stereotypical way. Look, for example, at Ciarán Óg Arnold’s hallucinatory account of dispirited evenings in Ballinasloe, already published as I Went to the Worst of Bars . . . and winner of the Mack First Book Award, or Enda Lowe’s At Mirrored River (publication forthcoming), a luminous account of individuals and place.

Add Eamonn Doyle, Emer Gillespie, Shane Lynam and Yvette Monahan and the sheer quality is unmistakable, particularly given that you could easily triple the number on the list and maintain that quality. It’s clearly an exciting moment for Irish art photography, which is increasingly assured, heterogeneous and relevant.

Ian Thuillier is best known as a documentary film-maker, with acclaimed works on Rory Gallagher (Ghost Blues) and Gavin Friday (Ladies and Gentlemen). He is also a noted photographer. Earlier this year, he spent several months travelling in Vietnam, taking photographs, 40 years after the end of the Vietnam war.

His trip to Vietnam also marks another, more personal anniversary, coming 20 years after his brother, the photographer Harry Thuillier jnr, visited the country. Harry, a gifted photographic artist with a dreamy, poetic visual style, died young in 1997. He was named after their father, the Irish Olympic fencing champion and sports broadcaster Harry snr, who died in 2011. When Ian went to Vietnam, he brought with him the same Russian panoramic camera that Harry jnr had used.

He travelled the length of Vietnam, from Ho Chi Minh City in the south to Hanoi in the north. For the Vietnamese people, a state of conflict that had its roots in French colonial rule and the enmities and allegiances that developed during the second World War had been a fact of life from 1944, when the Vietnam Liberation Army was formed. Following Gen Giáp’s defeat of the French at Dien Bien Phu in 1954, Vietnam’s proxy role in the Cold War got more pronounced, leading to increasing and disastrous American involvement and a horrendously destructive period.

As Ian Thuillier discovered, the exceptionally beautiful country that he photographed is still scarred by generations of bitter conflict. One could represent Vietnam entirely as a pastoral idyll, but that is only one aspect. He also photographs those whose lives have been damaged by war and its legacy, from victims of Agent Orange to those who have lost limbs to landmines and other explosives.

Vast amounts of ordnance were poured on Vietnam. Thuillier also distinguishes between the edginess of Ho Chi Minh City and calmer Hanoi, its mood still coloured by French colonial architecture. He paints a warm, affectionate portrait. Perhaps understandably, he does not explore the tensions that certainly exist in the country.