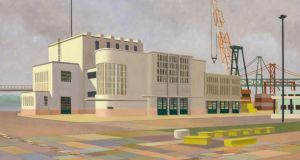 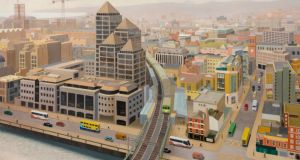 Stephen McKenna is the consummate European. Asked by an interviewer in 1990, “Do you consider yourself English, Irish or European?”, the painter replied, not entirely helpfully, but convincingly: “Yes.”

David Fraser Jenkins quotes the exchange in his admirably clear text for the handsome publication accompanying McKenna’s Perspectives of Europe, 1980-2014 at the Hugh Lane Gallery. The show gathers a large number of his paintings made in and of various European locations, from the artist’s home on the river Barrow at Bagenalstown to Istanbul, Berlin and Naples.

McKenna was born in London just before the second World War. His father was from Co Tyrone and eventually returned to Ireland to settle in Co Donegal, where McKenna too lived for a time. In the meantime, in 1946 the family moved to Austria.

That early history, his birth into a world that proceeded to fall apart, and firsthand experience of the devastated postwar continent – including, as he said, a rubble- strewn and heavily militarized Vienna, looking just as it does in The Third Man – has clearly shaped his artistic vision.

While McKenna alludes to conflict, fragmentation and frontiers in his painting, it is always with an eye to an underlying unity, evoking “a common culture and humanity” as Jenkins puts it. He is fascinated by Europe as a rich cultural entity, and nostalgic for something like a golden age, one that may never have existed but is always potentially there. Painting is the medium he believes capable of exploring all these ideas.

Appropriately enough, Perspectives of Europe has two incarnations. The first was in Middlesbrough’s Institute of Modern Art, an impressive, purpose-built gallery in the heart of an economically diminished city surrounded by the infrastructure of its industrial past.

In fact, some of McKenna’s relations were part of that past. During its industrial heyday Middlesbrough attracted large numbers of Irish immigrants and, as a young child, McKenna remembers visiting his grandfather and several uncles, all involved in naval engineering.

From 1959 he attended the Slade School of Fine Art in London and went on to teach at Canterbury College of Art. In 1971 he took the radical step of moving to Germany. Then, from 1980, he was in Belgium for several years.

Still, it is fair to say that Italy proved decisive. Jenkins pinpoints a working stay in Pompeii in 1986, when he made copies of Roman murals there. It is true: if you look at his highly dramatic paintings of Derry from the early 1980s and compare them with his work of the late 1980s, the contrast is startling, though the latter seem entirely in keeping with everything he’s done subsequently, including the fine paintings of European port cities made after 2000.

That doesn’t imply that it was simply Ireland versus the rest of Europe. There is a coarseness of texture, a relatively monochrome palette to the early 1980s paintings. One ambitious, pre-Pompeian painting from 1984 gives an idea of McKenna’s concerns and how he tackled them at the time. At 2.75m wide, The Italian Consulate in Berlin is physically imposing. The scarred edifice of the neoclassical consulate building, apparently still under repair, looms over municipal planting and piles of stones.

Built during the countries’ totalitarian accord around the time of McKenna’s birth, very badly damaged in the 1950s and subsequently restored, the Italian consulate symbolises the uneasy relationship between Europe north and south, recently manifested in the bitterness that flared between Germany and Greece.

During his time in Germany, McKenna became intrigued by the intense but ambivalent nature of north-south relations in Europe – Germania and Italia – not infrequently manifested in combined envy and disapproval of the sybaritic south on the part of the puritanical north.

The patchy pink render of the Italian consulate anticipates the lushness of warm colour that finds its way into the paintings in the later 1980s. The heaps of rough masonry in the foreground of the painting evoke the ruins of classical civilization. It’s interesting to see it in relation to a recent series of austere, didactic works, The Elements of Architecture, which isolates details of classical architectural grammar against nebulous backgrounds.

In the late 1980s, living in Italy and having absorbed the lessons of Roman and Etruscan art, McKenna produced the beginnings of a long series of marvellous paintings of interiors. They embody a harmony in living, working and thinking. Jenkins notes the way the artist multiplies spatial possibilities by playing around with scale, something he’d learned from his classical exemplars.

It’s not just that McKenna depicts a succession of interconnected rooms and occasional views to the outside world beyond. His interiors are both studios and homes. They open up other, multiple, imaginative spaces via depictions of paintings completed or in progress, books that suggest avenues of thought and enquiry, geological samples, vessels, food and drink, swathes of fabric and, though not in the current show, musical instruments.

Each interior is a world. Add the warm glow of Mediterranean light and you have something irresistible, but also stirring and involving: spaces of possibility.

Of the views of buildings and panoramas in port cities, Jenkins notes his tendency to paint them in a simplified, idealised, almost abstract way, without signs of wear and tear, bereft of people, as though they are pure architectural renderings. It’s not too much to say that the geometric patterning and pristine clarity of his rendering of the Custom House Lisbon suggests a utopian impulse, a glimpse of that potential golden age.

There may be no people in sight, but McKenna knows how to represent our cities as places one would like to be.