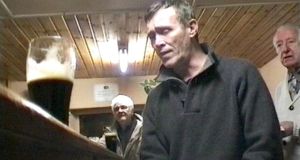 My Comfort and My Joy – Seamus Harahan and Thomas McCarthy ★★★★

There is an amazingly good traditional music series on TG4, extending over several seasons now, called Port. It’s a co-production with BBC Alba, the Scottish Gaelic channel, and at its heart are two singers and musicians, Julie Fowlis and Muireann Nic Amhlaoibh, Scottish and Irish respectively – though, as it happens, they are both islanders originally. Port involves Fowlis and Nic Amhlaoibh visiting a location with Celtic links, be it in Ireland or Britain, or a little further afield, meeting traditional music performers there and collaborating in performances.

In a way it stems from another collaborative project by the two, Dual, a 2008 CD that explores the correspondences and differences between Irish and Scottish Gaelic music. That album, and Port, exemplify the way music grows from families, friendships, interconnections, networks, history and chance. Usually, in Port, the performances are removed from the habitual session settings seen on television – the pub or hall – and treated with what might be described as a casual formality: beautiful settings, beautifully lit, with a clear acoustic. The results are revelatory.

One can imagine the sean nós singer Thomas McCarthy in such a context. But, characteristically, Seamus Harahan’s composite portrait of McCarthy, My Comfort and My Joy, a collaboration with the singer, takes a significantly different, even an aesthetically opposite approach. This is very much in keeping with Harahan’s way of working, which has habitually consisted of observation of human behaviour, interaction and codes, effected with a pointed artlessness, suggesting the perspective of a chance but interested witness. As he puts it quite accurately: “I nominally ask humanity to look at humanity again.” Or, again, he aims for imagery that encapsulates “an absentminded gaze in response to the world”.

His work has won acclaim, and more than one important award, including the Film London Derek Jarman Award in 2015. Over the course of his productive artistic career, although what he does is primarily lens-based, and digital imaging technology has advanced to a degree unimaginable when he was starting out (he was born in 1968), he has stayed with the analogue technology that was pushing the boundaries in the late 1990s. Working with McCarthy, he used the same Hi8 video camera he acquired back then.

McCarthy is a member of a well-known musical Irish Traveller family, the grandson of a renowned seanachie

Strategically so. The grainy, slightly diffuse quality of the imagery matches well with the casual, offhand framing and the camera operator’s tendency to glance distractedly at, say, a new arrival in the room. But the camera is also fixed on McCarthy when he sings, when he seems to reside in and be completely absorbed by an inner world, as though he is in a trance. He is completely in the song that he is singing. His concentration is absolute. He doesn’t emote, or perform. The song’s the thing.

Harahan is “attempting to draw attention to the confluences and contrariness of the extremely held otherness within our own indigenous ethnic cultures”. McCarthy is a member of a well-known musical Irish Traveller family, the grandson of a renowned seanachie, his mother a singer from whom he learned a great deal. He comes from an oral tradition and is a living repository of a vast wealth of musical heritage. He is also an activist for Travellers.

The exhibition comes with an argument that Ireland has marginalised and turned its back not merely on Travellers, but on significant swathes of its own past. Harahan wants “to look at an old weave of Irishness that hasn’t fitted with modern, plastic, Irish State ideals.” There’s some truth in that, but it’s also true that Ireland is heterogeneous. Many Irish people do value the old weave and the otherness. And consider contemporary cultural endeavours such as Port, which look to both past and future. Equally, McCarthy maintains a tradition and carries it forwards. My Comfort and My Joy is well worth a visit, for the music, and the thought.

Recently, Eoin Mac Lochlainn notes in relation to his new exhibition, he switched from using oil paint to watercolour, so that his working methods might have less environmental impact. It’s a small, personal gesture, but it’s a brave one too, for an artist well used to working in oil. The good news for him is that he’s proved to be extremely adept with watercolour. His new series of watercolours depict forests in the context of climate change.

They are attentive not only to deforestation but to the beauty of woodland and its myriad benefits for our species. While the watercolours are mostly on a modest scale, he has also made an ambitious immersive installation, An Choill, which pretty much fills one room. It is a virtual forest, a maze of some 64 painted lengths of suspended rice paper. It suits for its combination of strength, translucency and its deceptively delicate appearance.

Departing from naturalism, he builds up varying levels of watercolour splash patterns. You weave your way as if through a forest. It’s an elegantly simple piece, impeccably well done. While fine in situ, it’s flexible and would clearly work well in a number of different spaces. It’s also very responsive to light and, nice as the high-ceilinged rooms in Great Demark Street are, the direct light is from the north. Who knows, the installation may find a venue in the future that allows the play of a more dramatic light. Meanwhile, check out its first iteration.