Visual Arts: Gallo sets out to offer an alternative way of looking at art history 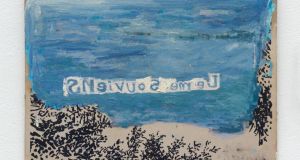 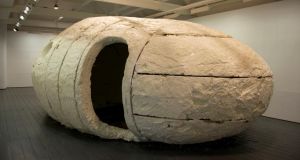 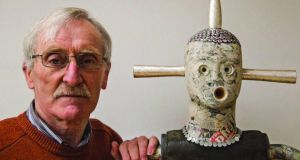 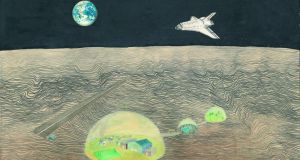 It makes sense to look at the work of Peter Gallo with an eye to his art history thesis, Bio-Aesthetics and The Artist as Case History, which was completed a couple of years ago and is available online. It is an ambitious piece of work that sets out to do nothing less than offer an alternative way of looking at art history from the mid-18th century or so onwards. Its argument is that conventional, object-oriented art historical approaches have proved to be inadequate. Instead, he proposes applying “a bio-political perspective” to art history and aesthetics, with an emphasis on our inescapable, subjective experience of embodiment.

Michel Foucault didn’t invent the term “bio-politics”, but his radical take on the conflation of the biological and medical sciences with politics best maps out the terrain Gallo has in mind. Foucault pinpointed what he saw as a crucial, 18th-century shift from an Aristotelian view of life and personal identity to a burgeoning biological view, coincident with the political progression from absolute, sovereign power to what he called disciplinary power. Gallo argues that this progression was also evident in new forms of artistic practice and aesthetics, and he coins the term “bio-aesthetics”. He goes further, seeing the development manifested in what he terms “clinical methods” in the practice and theory of art ever since. Hence the artist as a self-medicalised “case history”.

Gallo is based in northern Vermont, where he works as a psychiatric social worker in a rural healthcare agency. He is also active in community art projects, and has written about contemporary art. Go and see his exhibition at the Douglas Hyde and you’ll encounter a series of paintings, plus one small sculptural piece, which hangs on the wall rather like a disassembled painting. So far, so conventional. We’re even accustomed to the use of unusual supports for paintings, which he clearly likes.

He also makes liberal use of unconventional collage materials; objects such as buttons, various pieces of paper, toothpicks and, reputedly, chicken bones. What’s interesting about these is that they all seem to be personal in one way or another, in terms of, say, either sentimental meaning or bodily experience – as in lost buttons or eating chicken. It could almost be incidental, a technical device, but after a while it is clear that he is evoking the way our lives are attended by these clouds of personal detritus.

That is key to the way he works. He regularly uses the traditional medium of oil paint. It is a tremendously sensual, pliable material, and he explores its range, from impoverished, greyish, dull patches to thick, lushly chromatic impasto. He plays on the idea of paint as a skin or, extending that metaphor, as a body, a person, or a community. Think of the term “body politic”. Likewise the picture surface in a wider sense. Often, the surface, or skin, is patched, as though it has been wounded or damaged.

He uses words, or pieces of text, a great deal. Again, this is intensely personal. Words impact on us in many ways, either immediately or more subtly and slowly. Gallo visualises this process very vividly, as in one little painting, Homos Nomads Orphans Atheists. His work can be seen as a persuasive example of the perspective he advances in his thesis. While there is something disarming about the guileless, Emily Dickinson-like pictorial idiom he favours, charm alone wouldn’t be enough. The fact that he has a developed feeling for texture and colour and something else, something indefinable, clearly helps. Until Dec 3, douglashydegallery.com

Early last year, Elaine Byrne’s installation Raum at the Kevin Kavanagh Gallery partly recreated Raumstadt, a model structure by the Austrian-American architect, theorist and designer Frederick Kiesler. Among its clean, modernist spaces she included material from and photographs of the home of settled Irish Traveller Hanni Harty, whose Co Limerick cottage was abandoned after she died in 1994. Now, in Raumplan, Byrne has created another version of Raum together with several other works, the chief being a big, pod-like enclosure, Endless Resistance, complete with doorway, floor and window.

It’s an approximation of a room from another Kiesler project, the Endless House. In contrast to his Raumstadt, which was all primary colours and right angles, the Endless House was curvilinear and intended to be fashioned in concrete on a wire mesh. In the gallery, the pod has the aura of a futuristic idea that quickly becomes dated, but to his credit Kiesler did try to devise a holistic, flexible, liveable architecture.

Byrne’s exploration of his ideas concentrates on the tension between the rigidity of theory, however well-intentioned, and people’s actual needs, emotional as well as practical. Her musings on appropriate architectural thinking are given a heightened edge, and poignancy, by a reference in one piece – which quotes some utopian ideas on planning – to her father, John Byrne, a controversial property developer who died last year. Until Nov 18, gallery.limerick.ie

Sculptor Tom Fitzgerald’s book The Celtic Zoo collects a series of 24 watercolours made in response to Ireland’s boom and bust. Fitzgerald, one of the country’s most distinguished sculptors, whose work is steeped in a sense of practical history, says that the work was inspired by his daily sense of outrage as details unfolded of what had gone on and what was going on.

Thinking of Hogarth or Ronaldson, one might expect bitter sarcasm and rancour. In fact, the works are rather beautiful, ethereal and gentle, and are all the more effective for that. Fitzgerald evokes something of the pictorial innocence of the early Renaissance, when artists were discovering the magic of being able to depict the world in two dimensions. He taps into many relevant metaphors: the expulsion from Eden, the Tower of Babel, Noah’s Ark, even the Fall of Saigon. He brilliantly conveys what we lost, or, in some lucky cases, were on the point of losing, by translating natural riches into pure, exploitable real estate. Theo Dorgan provides a mordantly witty verse accompaniment.

The Celtic Zoo by Tom Fitzgerald and Theo Dorgan (€65 or, with an original print, €150) is available from Occasional Press, email info@occasionalpress.net

Are psychopaths born or made, and can they be cured?
10