The influential director of the Tate galleries still believes in what artists can do, and the public have backed his faith in their millions 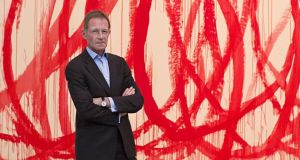 For a man who has transformed the landscape of contemporary art Nicholas Serota is remarkably understated. Maybe that’s because the one thing he doesn’t need to do is shout about his achievements.

Never out of the top 10 of ArtReview’s influential Power 100 list – he’s currently at number five, down from pole position last year – he has, throughout his career as director of Oxford’s museum of modern art, London’s Whitechapel Gallery and, since 1988, the Tate, been celebrated and vilified in almost equal measure. He was knighted in 1999, and these days he’s more often feted as, due in no small part to his efforts, the British establishment, including the press, has come to appreciate even the most outlandish apparitions of contemporary art.

We meet in the elegant and refined environs of Lismore Castle Arts, in Co Waterford, a location that seems an ideal backdrop for someone such as Serota, who is here to open the castle’s current exhibition, A Weed Is a Plant Out of Place. He is tall, spare and soberly dressed, in a crisp white shirt and grey trousers, with his trademark rimless spectacles. From looking at photographs and watching interviews, I am expecting a man of formidable intelligence, with perhaps a cold passion for art, someone who wouldn’t suffer fools gladly. I didn’t expect to be utterly charmed.

We begin with the coincidence of the Lismore exhibition and the installation that is just concluding at Tate’s iconic Turbine Hall. Empty Lot, by Abraham Cruzvillegas, put soil collected from 50 sites across London, from Buckingham Palace to Wormwood Scrubs prison, in a grid of planters, watered and warmed so that visitors could watch to see what weeds grew. Serota admits the growth wasn’t as luxuriant as one might have hoped, but it’s nevertheless an interesting parallel with the Lismore show.

“At certain moments,” he says, “there are issues and ideas that are in the air, and there are artists beginning to explore them. I’m not saying all artists are concerned with weeds at this particular moment, but many are interested in the idea of growth, natural form, migration and the way the world is changing with climate change.”

Talk of weeds brings us on to gardening, which he enjoys. He has a small garden at his London house, which he shares with his second wife, Teresa Gleadowe, who works at the Royal College of Art in London, and a larger one at their holiday home in Cornwall, where there is also an outpost of the Tate.

I suggest that some art needs a crowd, such as The Weather Project, which saw Olafur Eliasson’s haunting misty sun hanging over the Turbine Hall throughout 2013.

“That wouldn’t work on your own,” I say.

He pauses, thinks and gives a hint of a smile. “It did work on your own, but in a different way,” he says.

“You’re probably one of the few people in the world who knows that,” I say.

What you don’t get in photographs, or hear in taped interviews, is that Serota’s brown eyes twinkle, and his smile has a hint of mischief. While he’s recalling having The Weather Project all to himself I get a sense of a quiet pride and of the magic he must have experienced. There’s no trace of the shyness that his first wife, Angela Beveridge, remembers him being afflicted by, in a 2012 New Yorker profile (nor of the Caravaggio-esque long golden hair she describes).

Perhaps it shouldn’t surprise me that Serota is good fun to be around. Maybe it’s that his voice is of the particular British patrician kind that makes him sound aloof, but he’s clearly moved by art, and has spoken about being excited by the challenges it can bring to his own imagination. But he is, after all, the man who helped to enable art itself to be fun again.

Tate Modern has, from time to time, been derided for reducing art to entertainment, and some critics have been vitriolic. The late Brian Sewell coined the term “the Serota tendency” for pretty much anything that wasn’t traditionally figurative, while, writing in the Daily Mail in 2012, Ruth Dudley Edwards declared that Serota had “used his power as head of the Tate galleries to promote talentless self-publicists and to encourage the proliferation of the ugly and the pointless”.

Ugly and pointless are questions of taste, but Tate Modern’s visitor numbers have been stratospheric. It planned for two million in its first year and got five million. Recent headlines in the UK expressed shock that in 2015 there were “only” four million visitors. Serota is unworried, answering my question in a quietly rhetorical way, which I imagine has been honed at many meetings.

“If you’re using public money you have a responsibility to the public and also to artists,” he says. “And you have a responsibility to use the money in a way that opens doors. And changes people’s attitudes.” But, he adds, “I don’t think anyone could have predicted that, given the opportunity, the British public would respond to contemporary art to the degree that they have.”

So why has the press, on occasion, been so furiously angry?

“It sells newspapers,” he says. Then thinks some more. “They don’t understand it, and they are behind the times. It’s rather like politicians. Newspapers and politicians can’t quite keep up. They’re always slightly surprised by the fact that people want to spend time looking at contemporary art.”

His voice becomes ever so gently louder, as he describes a David Cameron speech downgrading art in schools as something to be considered when the real business of educating is done.

I ask if he minds annoying people, and there’s a pause and hint of a smile again. “Uhm, no, not if it results in change.” By now he’s grinning, and adds: “I don’t set out to piss people off. I mean, I set out in a way to try and open their eyes, and maybe that’s a painful process sometimes.”

This might sound like arrogance, but it comes across with a warmth and a belief in what artists can do. Serota has an encyclopaedic knowledge of art and of Tate exhibitions going back over the years. We go on to talk about Whistler, and chat about Whistler’s mother, and he considers a future Whistler show at Tate (there was one in 1992), “maybe with another artist”.

He doesn’t collect so much himself, citing the rule that he has to offer anything to Tate first, and describing it as complicated.

“It’s difficult,” he says. “If I go into a studio and I see work by a young artist . . . There have been occasions where I’ve really wanted to buy something for myself, and I’ve also wanted Tate to buy something, and my colleagues at the Tate have said: ‘We don’t think this artist is ready to be bought by the Tate yet.’ So what is the message if I then buy it for myself?”

“You can remake the canon to a degree. It’s particularly difficult to do it if you go back before, probably, about 1950,” he says, citing both a lack of opportunity for artists outside the narrow norms of the times, and the collecting culture. “The core narrative of what art looks like – that is, the art that is valued – is changing. When we opened Tate Modern, in 2000, virtually all the work that was on view had been made in northwest Europe or North America. When we open in 2016 that will no longer be the case.”

Tate has acquisition committees in Latin America, the Middle East, Africa and Asia.

I ask if there’s anything he still wants to do. “Oh, lots. We’ll see what happens after the Tate when I leave the Tate. Eventually.” There is the wry smile again. “One day. Sometime in the next 30 years.”

A Weed Is a Plant Out of Place is at Lismore Castle, Co Waterford, until September 30th; lismorecastlearts.ie. The revamped Tate Modern opens on June 17th; tate.org.uk