How Emmet Kane turned wood on its head 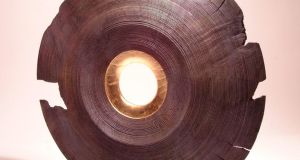 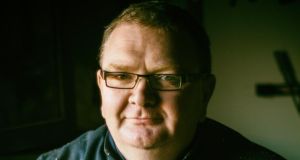 Emmet Kane: ‘I love seeing what’s inside wood, and what happens as it dries, the colour changes and it moves. If there’s a crack or split, it was meant to happen. I enjoy it’ 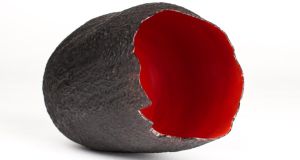 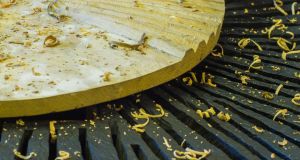 A scene from Emmet Kane’s workshop 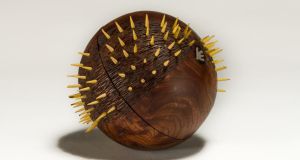 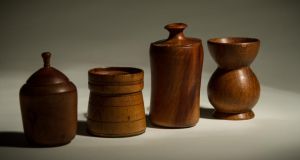 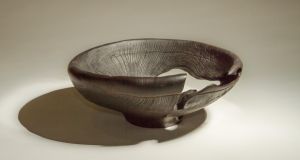 Bowl (1992), ebonised elm, textured with an incised gold line on the side

Emmet Kane’s A Journey starts with the familiar: a series of wooden boxes and bowls, turned on a lathe in the late 1980s, the cherry and elm polished and richly glowing. Isn’t this what you’d expect from craft? Useful, recognisable things, marvellously made.

But as the exhibition progresses, things get a little more complicated. Bowl (1992) is made from ebonised elm, its regular shape disrupted by natural gaps in the original wood so that you wouldn’t really think of putting anything in it. A barely perceptible gold line wraps around the side. Dun Aengus (1996) is a sandblasted disk of burr oak, the contours echoing the ancient geographies of the Inis Mór fort. It’s not exactly something you’d use to dish up the smoked-salmon snacks. By the time we get to Gealltanas (2002), a large, fractured oak disk with a gilded hole in the centre, I’m strongly reminded of the work of the artist Patrick Scott.

Irish craft has come of age, shaking off any last vestiges of twee shamrockery, bog oak wishing wells, and Aran sweaters mass-produced in factories in China. Kane is one of an exciting generation of makers, among them Frances Lambe, Joe Hogan, Liam Flynn and Seamus Gill, who are unbothered by demarcations between art and craft, aesthetics and utility, concept and matter. The success of the Turner Prize-winning ceramicist Grayson Perry demonstrates that art can look like craft; and whereas once you might have claimed that art was primarily about communication of a representation or an idea, while craft concentrated on material and function, those distinctions are diminishing.

As one branch of art increasingly tends towards the purely conceptual and theoretical, there is definitely a stronger emphasis on the activity of making in craft, but the main separation seems to lie in how it is valued, where it is exhibited, and who supports its making: the Arts Council or the Design and Crafts Council? Nevertheless, Kane’s more recent work is as much about the expression of ideas as it is about what he can make wood do, even though that is frequently miraculous.

One of my favourite pieces in the show, Recession Proof (2009), a polished sphere of burr elm, has a shield of yellow spiky spines, making it seem like some strangely chic hedgehog. Negotiate these to twist the pair of magnetised sections apart, and a secret core is revealed, hollowed-out and layered with gold leaf. “It’s about people who hid their pot of gold when things went wrong,” says Kane. It also speaks of the idea of protecting the core of what is really valuable – family, friends, love and ethics – when things get tough.

Kane is a larger man than one might expect. That was certainly the impression the curator Jennifer Goff had when she met him for the first time at the prestigious Sofa (Sculpture, Objects, Functional Art and Design) showcase in Chicago in 2008. “His pieces were so intricate, I was expecting to meet a man of more diminutive stature, a man with very small hands,” she remembers.

Instead, Kane is tall, solidly built, and has an engaging, irreverent personality. He was born in Castledermot, Co Kildare, in 1970 with a rare congenital condition that meant he had to spend much of the first three years of his life in hospital. Viral meningitis hospitalised him again just after he started school. “I always had a fear of needles after that,” he says of his time in hospital, as we stand in front of Spikey Lad (2004), a loop of ebonised oak that looks more like wrought iron, pronged with bright red spines. “Maybe it’s me meeting my fears,” he suggests.

Diagnosed with dyslexia at the age of eight, and with so much school missed through illness, Kane found more satisfaction in making and looking than in academic learning. Going to construction sites with his building-contractor father, or galleries with his mother, and inspired by visits to archaeological sites around Ireland, he developed a philosophy of ignoring rules, pushing boundaries, and following his nose when it came to the direction in which to take his work.

“I get bored very quickly,” he says. “And I love the imperfections in things. I love seeing what’s inside wood, and what happens as it dries, as the colour changes and it moves.” He describes this process as letting “nature have its torments”. “If there’s a crack or split, it was meant to happen. I enjoy it.”

This mix of inspirations, and his short attention span, has led to a highly eclectic output. Gealltanas is based on the ancient Irish “swearing stones”, and the tradition of shaking hands on a promise through the hole in the middle. It was made as a present for his sister’s wedding. He admits to eyeing up pieces of wood, and welcoming storms for the windfalls they bring, and he agrees that artists – including Pat Scott – have been strong influences.

This exhibition includes a piece, P.S 2014 (2015) dedicated to Scott. E.7.E.11 (2015) an homage to an homage to modernist architect Eileen Gray, is a delicate ebonised oak vessel, its interior rich with 40 coats of perfect red lacquer. “I step back sometimes and think I’m half mad. Gold leaf and lacquer will highlight every imperfection.” At the same time, those imperfections are what drives him. “It’s the things people say you can’t do anything with. I want to take them and see what I can make of them.”

P.S 2014 was prompted by seeing Scott’s exhibition at the Visual centre in Carlow early last year. “I’d seen Patrick’s work, but never met him.” The gilded sunburst wheel of bleached burr oak “turned out the way I wanted it to. I can’t always say that. Sometimes it gets very warm in the workshop . . .” he says ruefully, referring to his occasional bonfires of mistakes.

David Ellsworth, whom Kane describes as “the god of woodturning”, inspired him to push himself beyond what he thought he was capable of. Ellsworth had come to Dublin from the US in 1990 to demonstrate hollow-form turning at a seminar. “He revolutionised wood,” says Kane. “He flipped it on its head and made it an art form.”

In the exhibition catalogue, Ellsworth writes of the barriers the form has had to overcome to be accepted by curators, collectors and taste-makers. “Non-utilitarian turned wooden objects have been virtually unknown in our western cultures . . . So what should we do with all this new stuff? As well, the makers of these objects understand their value, but what are they actually worth?”

Walk through the galleries of the National Museum at Collins Barracks and you’ll see cabinets and cases of objects admired by previous generations. “Admired” because, apart from happy accidents, it’s the things we have valued that survive in collections and museums. There are silver, gold, crystal, things of obvious value – if only because of the materials used in their making. Woodturning is a relative newcomer to this canon, and Goff says that A Journey is the first solo show by a contemporary craftsperson to be held at the museum. It is thought-provoking on many levels and a very good start.

A Journey is at the National Museum of Ireland, Collins Barracks, until the end of the year. museum.ie