High anxiety and the fine art of falling apart 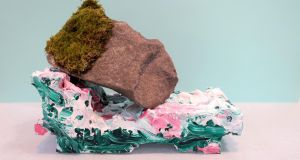 If Futures is a gauge of the mood among artists currently at an early stage of their careers, that mood is distinctly uneasy, even anxious. The RHA’s Patrick Murphy and Ruth Carroll have trawled through visual arts activity, from individual studios to group shows and artist-led projects over the last 18 months, and come up with a list of six artists who have begun to make a mark. It is to be expected that artists – perhaps younger artists especially – will reflect the anxieties of their age and, unless you are cheerfully oblivious and/or solipsistic (not unheard of among artists), there hasn’t yet been an age without anxieties.

It’s also typical of younger artists that they take things personally. Approach the show via the main staircase and the first work you encounter is by Laura Fitzgerald. Yes, a lively, quickfire sense of humour is woven into everything she does – drawings both exquisitely fine and consciously roughhewn and caricaturish, video, installation, texts gathered in an artist’s book – but it is an edgy, nervous, you-have-to-laugh species of humour, prompted by a kind of appalled realisation that things are, euphemistically speaking, not looking good.

Fitzgerald is enduringly troubled about what it means to be an artist, especially a career artist, in the sense of courting and becoming dependent on the commercial artworld. Not so much the lived reality of the artworld in any local sense, where the entire sector struggles to get by, essentially, and not always successfully, but the headline-grabbing realm of the international art market. That market has polarised into a winners-take-all, losers don’t matter template. Fitzgerald alludes to the dinosaurs and mass extinctions, to strategically letting it pass you by, and she does not restrict herself to a specifically artistic dilemma. Rather, she suggests, similar considerations apply in all areas of life.

Earlier this year, Bassam Al-Sabah’s exhibition at the LAB in Dublin adroitly conjoined the worlds of childhood imagination and the brutal reality of recent history. That is perhaps less clear in the presentation in Futures, though the quality of his work wins through. Miniature paintings of family snapshots are encased in perspex, preserved from another, lost time, like fossils in amber. In a CGI animation, we progress through a simulation of Al-Sabah’s one-time family home in Iraq, but streams of matter – materialisations of non-stop streams of information and imagery – coil endlessly out of all sorts of connected devices including television, radio and computer monitors, threatening to obliterate the house.

The forest landscapes in Cecilia Danell’s paintings possess an emphatic, enhanced clarity on the one hand, a kind of storybook vividness, and, on the other, they seem to be on the point of dissolution, as though they might physically come apart. In sections of the compositions, the paint that embodies the trees and the land melts into drips and amorphousness. Danell made the paintings from photographs taken during winter walks in the woodland around the family farm in Sweden, so that, as with Al-Sabah’s work, there is the possibility that she is evoking a past time, the past of her own earlier life. The unreliability of memory, the vulnerability of the natural world, the simple fact of impermanence: her paintings comfortably accommodate many layers and lines of interpretation.

Things also fall apart in Joanne Reid’s sculptural arrangements of functional materials and devices. Perhaps the surrounding works accentuates the effect in Futures, but her forays into the everyday manufactured landscape, domestic, commercial and urban, suggest that the best-laid plans will come to naught and things come undone. She shows a number of individual pieces, but their common underlying logic suggests that one large, co-ordinated installation might be a very effective line of approach for her at some point.

So far in the exhibition, so familiar in terms of the world and the ways we encounter it, but Jennifer Mehigan shifts intelligibility into warp drive with her hyper, hybridised creations. Streaming myriad sources and references into the mix, she aims for a visual language that doesn’t actually exist and struggles to bring it into being. She has written that what she makes “suggest human and non-human bodies merging” and her densely ambiguous images suggests the explosive proliferation of mixed organic and synthetic forms and substance, forms that unsettlingly merge external and internal bodily properties. They also evoke advertising imagery, among other things. Each image is shadowed by what might be an unseen alternative, which is in keeping with the sense of uncontrolled productivity. Promising as the work is, it’s possible that she has not yet found its most appropriate form.

Marcel Vidal’s dungeon-dark installation comes with a health warning. Appropriately so, but strictly speaking it may be superfluous since even a glance into the light-consuming black hole he’s made should be enough to put you off venturing over the absolute event horizon. Not that theoretical physics is the dominant reference that comes to mind. The spiky aggression of his environment, which includes a central, elevated platform and some fetishistic detailing, evokes something like violent sacrificial ritual. He juxtaposes paintings with the installation, paintings that, he notes, exemplify a contrasting “seemingly gentle aesthetic” as opposed to the brutalism of the three-dimensional work. In the event, that is not entirely clear, or necessary. But the atmospheric power of the environment he creates is undeniable.