Have you seen it? The story behind the giant squirrel on Tara Street 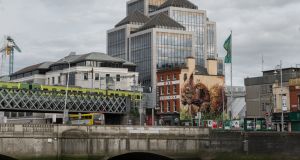 Last week the Irish filmmaker Trevor Whelan stood near Tara Street in Dublin to gauge the reactions of passersby to a large-scale street art piece erected on the wall of the Workshop Gastro Pub. The piece is by Portuguese artist Artur Bordalo, aka Bordalo II, the latest in his series of “Trash Animals” that aim to draw attention to environmental issues. The work, depicting a giant squirrel made from waste, highlights the plight of the red squirrel in Ireland. It’s the latest large-scale street artwork to appear, as if by magic, in the capital.

Trevor Whelan and Rua Meegan are working on a documentary of Bordalo’s work, supported by the Irish Film Board. They also worked with Owen Farrell on the short film Outsider, about Irish street artist Dermot “DMC” McConaghy.

Whelan met Bordalo at a street art festival in Berlin about two years ago when he was building a toucan from waste in the city. “I loved his art work,” Whelan says. “It’s so intelligent, he works so hard, it’s inspiring to be around him and his assistants.” Whelan ended up travelling and filming with Bordalo. Meegan put a treatment together for the Irish Film Board, who got behind their idea for a documentary.

Finding a wall for the Bordalo piece in Dublin wasn’t easy, given that it needed a large, prominent space. Street art has a lot of red tape to get through in Dublin. Much of the large-scale street art in the city and elsewhere in Ireland has permission from the owners of a building or it goes up (technically) illegally and temporarily. Depending on how the pieces are received by the public, sometimes a hands-off approach is taken to the pieces or will result in long-term artworks gracing city walls. And sometimes there are arguments over planning, such as the controversy that surrounded Maser’s Repeal the 8th mural on the Project Arts Centre in Temple Bar last year.

The wall of the Workshop Gastro Pub at the junction of Tara Street and George’s Quay was Whelan and Bordalo’s first choice. They liaised with structural engineers and conservationists to get the project up and running. Glen Collins was the producer of the project which was partly funded by local businesses.

In the beginning people are confused because its just trash, dirt and a big mess

“Within 10 minutes in Chadwicks, the manager was walking around with buckets” gathering materials, Whelan says. The Portuguese ambassador to Ireland organised flights for Bordalo and his team to come to Dublin. The site was cleared out, and waste material was gathered with the help of Fingal County Council, Hammond Lane Metal Recycling in Poolbeg, and a yard in Finglas where more material was sourced.

When Bordalo arrived in Dublin on a Monday he began collecting waste. On the Tuesday he started fabricating the piece and putting together the basic shape of the squirrel in sections. On Wednesday he assembled most of the head and erected it on the wall. On Thursday most of the body was ready. Rain scuppered Friday’s work and Bordalo painted all day Saturday, turning the piece around within a few days.

“In the beginning people are confused because its just trash, dirt and a big mess,” Bordalo says over email, “but as soon as the piece starts to get a shape and colour, people start to understand what I’m talking about.”

From the high-end, gallery-ready pieces of Conor Harrington to James Early’s naturalistic approach reminiscent of stained glass, the quality and diversity of Irish street art continues to grow. Maser has moved from walls to gallery shows, and recently revitalised a new co-working space called the Tara Building not far from Bordalo’s squirrel. There’s ADW’s wry and impactful work, Solas’ bold pieces, Will St Leger’s politically-edged work and the stencil art of ESTR. There is newcomer Caoilfhionn Hanton, the flawless sign painting of Vanessa Power and the work of Rask, Sums and Fin Dac. There are also the large-scale portrait murals of Joe Caslin, Kin Mx and Anna Doran’s pattern work.

Rather than the city covered in advertisements and drab buildings... this stuff makes you think

Louise Flynn is the curator of the Waterford Walls project, which is currentlycrowdfunding its their2017 festival. There is also the increasing presence of female artists on walls, thanks in part to the Minaw Collective, an all-female street artist crew. And Kemp Gallery, which focuses on street and graffiti art, recently moved into a new shared premises on Dublin’ South William Street with Gallery X.

Recently, the London grime artist Stormzy was treated to a massive mural in Smithfield in Dublin when his tour kicked off in Dublin. The work was by a lesser known artist called Subset, the crew behind it were brought backstage to meet Stormzy after his gig, and the MC visited the piece the following afternoon.

The 3D element of Bordalo’s piece using material as opposed to paint means its planning and construction undergoes rigorous safety checks, using bolts and wire to secure it. Some of Bordalo’s pieces have stayed up for more than five years. The crew has permission from Dublin City Council for the artwork to remain for six months. “Rather than the city covered in advertisements and drab buildings,” Whelan says, “this stuff makes you think.”