Bringing Eileen Gray into the light 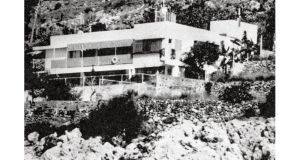 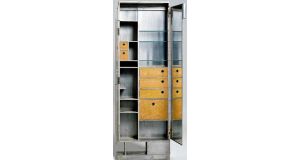 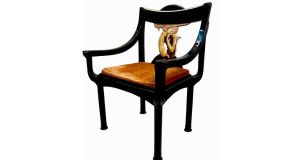 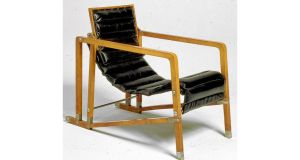 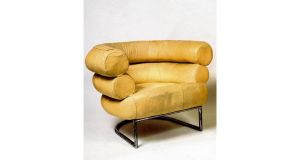 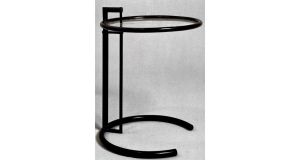 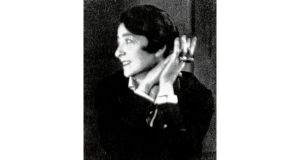 A portrait of the designer 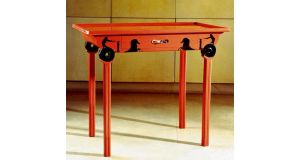 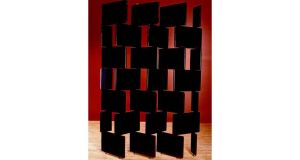 Brick Screen by Eileen Gray, which is on display as part of her retrospective in Paris

There is no plaque on the 18th-century building in Paris where Eileen Gray lived for 70 years. But this lapse is bound to be put right soon, now that the Centre Pompidou has ranked her alongside Le Corbusier and Mies van der Rohe among the architects and designers who “defined modernity” in the early 20th century.

For the next three months, 1,000sq m on the sixth floor of the French national museum of modern art will be devoted to the first complete exhibition of Gray’s work. It has furniture, rugs, scale models, photographs and memorabilia assembled for the first time from sources on five continents, including many private collections.

It is a stunning ensemble, starting with her exquisite Siren chair from 1919. Beautiful rugs, eclectic lampshades, modern lacquer screens, cabinets with pivot drawers, a folding chair that turns into a ladder, and a louche boudoir design for a house in Monte Carlo all show that the Co Wexford-born designer was ahead of her time.

Some of the original furniture – none of which was mass-produced – bears evidence of its age. A chrome towel rail is tarnished. The glass on one of her signature circular side-tables (from the Pompidou’s own collection) is cracked. A small cork-topped dining table has an undulating surface. But Gray’s brilliance shines through.

The show, which takes up five specially designed rooms, celebrates her achievements. It underlines how unique each of the pieces is and, therefore, all the more rare. Even her rather hideous Dragons chair (1910) sold for a staggering €22 million at the Yves Saint Laurent-Pierre Bergé auction in 2009, though it is not in the exhibition.

Like James Joyce and Samuel Beckett, Gray was always forward-looking. “The future projects light, the past only clouds,” she once said. A painter by training, self-taught in many other areas, free above all else and far from conventional, she continued to design throughout her long life and left behind more than 70 years of creative work.

“In an artistic world still largely dominated by men, Eileen Gray embodied a new kind of femininity,” says exhibition curator Cloé Pitiot. “A total designer, she continues to inspire a whole generation of artists to this day, in fields ranging from photography to textiles, from lacquer painting to architecture . . . What is left of Eileen Gray are unique, resolutely bold works, incomplete archives and . . . a host of mysteries.”

Frustratingly for those who would like to find out more about this enigmatic Irishwoman, she burned letters from likely lovers such as Romanian architect Jean Badovici and music hall singer Damia. Pitiot describes her masterpiece, the E-1027 villa built in Roquebrune on the French Riviera in 1929, as “a manifesto of modernity”. Designed in close collaboration with Badovici, with whom she may have been having an affair, it combines “tremendous technical virtuosity with an inimitable poetic force”.

Gray’s much copied side table in chromed tubular steel with a glass top, adjustable for height, was originally designed as a bedside table for E-1027. Organised around a central room, with a continuous run of full-height windows looking out over the sea, the villa (now a French national monument) had numerous bespoke built-in cabinets.

She spent most of her life in France, buying a first-floor apartment at 21 rue Bonaparte, in Paris, in 1906 before she was 30; it was there that she died in 1976 at 98. The National Museum of Ireland was lucky to acquire the contents of her archives in this small flat, including several pieces of her modernist furniture.

The permanent exhibition dedicated to Gray at Collins Barracks is quite dull and very limited by comparison with the Pompidou’s breathtaking retrospective, which sets out to show that drawing, painting, lacquerwork, interior design, architecture and photography all mingled in Gray’s career to form a coherent oeuvre.

Visitors are led through the phases of Gray’s life, from the Slade School of Fine Art in London at the turn of the 20th century, her fascination with oriental lacquerwork at the Victoria and Albert Museum, then learning it in Soho from an artist referred to as “D Charles” and perfecting it in Paris with Seizo Sugawara.

Gray collaborated with the Japanese master for 20 years, starting in 1910. From their studio at 11 rue Guénégaud would emerge such emblematic pieces as Le Magicien de la Nuit, one of her lacquered screens; it was bought by fashion designer Jacques Doucet, who then commissioned her to furnish his new apartment in Paris.

In 1917, while she was a volunteer ambulance driver in war-time France, the English edition of Vogue published a flattering article on her lacquers. This encouraged her to set up shop on the ritzy rue du Faubourg Saint-Honoré, where her clientele included such notables as Baron Philippe de Rothschild and Vicomte Charles de Noailles.

The shop, called the Galerie Jean Désert, specialised in pieces of furniture, carpets and designs for apartment interiors, and had a weaving workshop in the basement. Gray’s decade here (from 1922) was her most prolific period, with lacquerwork and weaving evolving towards chromed tubular metal, glass, cork and rhododoïd, as Pitiot notes.

Her biographer Peter Adam says she “had a profound sense of the soul of objects, contemplating them, analysing them, perfecting them. The various stages of her work manifested a free spirit, uncompromising, either with fashion or the trend of the day.” She told him: “To create, one must call everything into question.”

One of the rooms in the exhibition is devoted to her house set in vineyards and citrus groves above Menton. She called it Tempe a Pailla (meaning “time for yawning”) and it was the only architectural project she designed independently. Clearly of lesser importance than E-1027, it is chiefly known for its prototype furniture.

There are marvellous balsa-wood models of all three of the houses associated with Gray (the third was a renovation and extension on a house called Lou Pérou, near Saint-Tropez, which she embarked on at 76). The models, made by students at the University of Florida, are from the Irish Architecture Foundation’s collection.

Inevitably, there is reference to Le Corbusier’s unilateral decision to paint murals on the walls of E-1027, both inside and out, in 1937. Gray knew Corbusier, of course, but she was incensed by his arrogance. He built his own “cabin” alongside the villa she designed with Badovici. He died while swimming there in 1965.

The exhibition includes a remarkable portfolio of Gray’s later architectural projects that were, sadly, never built, such as a holiday centre, an ellipse house and even a proposed design for a theatre for staging ancient Irish epics. It ends with a charming four-minute clip from a filmed interview she gave towards the end of her life.

President Michael D Higgins, who officially opened the exhibition last Monday, described it as “magnificent and evocative”, saying that at last we had found “the rightful place of Eileen Gray”. With half a million visitors expected to see it over the next three months, there is no doubt she has been rescued from relative obscurity.

At first acclaimed by the avant-garde critics in the 1920s, as Pitiot notes, Gray had “sunk into oblivion to rise again, in 1968, under the pen of the historian Joseph Rykwert, who restores her to her former glory in the magazine Domus”.

After that, much of her furniture and other work was mercifully (and profitably) saved for posterity.

About a quarter of Gray’s works are now preserved in museum collections, including the archives held by the National Museum of Ireland, and the Victoria and Albert Museum in London.

Unique among the private lenders for the Pompidou exhibition, bookmaker and international art connoisseur Joe Donnelly and his wife Marie, a former chairwoman of the Irish Museum of Modern Art, bravely allowed their names to be cited in the catalogue for their wonderful collection of two lacquered wooden boxes, a floor lamp and a cabinet.

Inevitably, their value will be boosted by the Pompidou’s homage to Gray. There are plans to stage it in Dublin this autumn at the Irish Museum of Modern Art, but this is likely to be on a much smaller scale, with only some of the exhibits travelling.

* Eileen Gray is at the Pompidou Centre, Paris until May 20th

The Strokes: ‘There was conflict, fear, and we got through it and made records’
3