‘Are we going to let them burn us at the stake again?’ Jesse Jones’s bewitching art 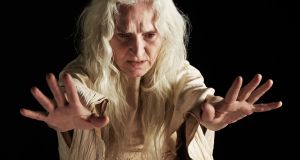 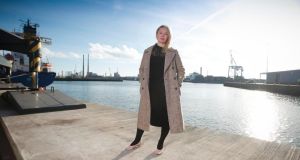 There’s something seductive about reinventing the past, letting the “what-ifs” take over to create new imagined futures. Sometimes it’s a dystopian adventure – as in SS-GB, the TV series set in a world where the Nazis won the war – but away from fiction and entertainment it’s a pretty pointless exercise: revising past mistakes to invent worlds that will never be. Unless, that is, you happen to be Jesse Jones.

For Jones, Ireland’s representative at this year’s Venice Biennale, reimagining what might have happened, had things been done differently, is a step on the way to demanding that things must be done differently today. We meet in a cafe on Dawson Street, closing the door on the chaos of digging that is the Luas works outside. Jones is taking a break from grading film and packing crates for shipping her work for installation at the Irish Pavilion in Venice’s great Arsenale. “Excited?” she says, in answer to my inevitable question. “It feels like a dream. It’s on a scale that’s super-intimidating, but it’s an amazing place.”

The Venice Biennale, also known as the Olympics of the art world, is an extraordinary event. It is held in Venice’s Giardini and Arsenale, and spreads throughout the city, and is visited by about 400,000 people. Selection is through competitive submissions, and is made by a team convened by Culture Ireland. Over the years, Ireland has had some missteps, but there have also been highlights. Kathy Prendergast won the prestigious Premio 2000 prize for her exhibition in 1995. Richard Mosse was another award winner in 2013. It’s a huge stage for any artist, and even if work draws on local concerns, to be successful it must be universal in reach.

So what is Jones planning to show? Tremble Tremble, which Jones describes as a “bewitching” of the judicial system, has been conceived especially for Venice with curator Tessa Giblin. The title comes from a 1970s Italian wages-for-housework movement, where women chanted: Tremate, tremate, le streghe sono tornate! (“Tremble, tremble, the witches have returned!”) For Jones, “the idea was to create a fiction”, a reaching-back to a lost past where women held power, via the witch trials of the 16th century, and through more recent events, including the symphysiotomy scandal and the Repeal the Eighth abortion legislation reform movements today.

If ever there was a project for a post-Waking the Feminists Ireland, it’s this – and yet it’s not opportunistic. Instead the installation, which includes a film collaboration with actor Olwen Fouéré and sound artist Susan Stenger, and the drafting of a new law protecting and celebrating women as the origin of all life (“The Law of In Utera Gigante is antecedent and superior to all man-made law”) comes both from her researches as an artist, and her own life experiences.

Jones was raised in Tallaght in Dublin. Her father worked two jobs, and she was the first of her family to go on to third level, studying sculpture at NCAD. “Growing up in Tallaght was an amazing experience,” she says. “I only really got it when I first travelled to LA to make a film, or to Australia. There’s so much space there too, your mind can unfurl.” She has since moved back, and on an earlier phone call to set up our interview I catch her sitting in watching The Commitments with her mum. “It was always multicultural. Because it was the place people could afford to live, it was class and culturally homogenous. When you travel, where you’re from in Dublin means nothing.”

She has a brilliant way of talking, drawing you into her world, which is rife with passionate interest in her subjects. One of these is our pressing need to reorganise society. “I’ve always been an anti-capitalist. Growing up in Tallaght, class consciousness was more important to me than gender politics. But as I got older, I got interested in feminism as a critique of capitalism, and how capitalism arises out of a destruction of matriarchal culture.”

When I was a kid, my mum would point out the marks on her face. She’d say that was where the sparks caught her when she was burned as a witch

Matriarchal culture was also a core part of Jones’s upbringing. “I grew up under a rational modernity, but with the twist of having an exceptional mum. When I was a kid, she’d point out the marks on her face. She’d say that was where the sparks caught her when she was burned as a witch.”

As she speaks, Jones points to matching marks on my own face, and I briefly entertain the idea of my own possible past lives. Jones’s mother featured in her Hugh Lane exhibition No More Fun and Games (2016), in the form of a huge photograph of her beckoning hand, imprinted on a vast curtain that swept through the galleries.

Jones’s work can be difficult. She describes the “seismic feeling” she gets from discoveries – such as Lenin’s passionate advocacy of the theremin, a haunting instrument played by proximity rather than touch, which would go on to be a staple of B-movie soundtracks. Her 2008 exhibition The Spectre and the Sphere at Project Arts Centre was based around this. “How people are affected by art is important to me. It can come from a deeper cultural memory, and I want that feeling to be available to people.”

She agrees that sometimes “you might have to do a bit of more work” to get into some of her pieces. “Like if you were a man who has no knowledge of institutional violence against women, you have to do a bit more work. But that’s the necessary human labour of being in the world together, trying to understand each other’s work. It’s an empathetic work.”

Empathy is key. I ask about her mother’s ability to read tea leaves, and Jones’s own interest in tarot cards: part of the Venice installation will be based on imagery from the tarot.

“Tarot is conjuring the material world through images, and that is a really useful way of looking at art. It’s conjuring a series of images that help you see more. Our most potent ideas come from the subconscious.

“It’s not so much the tea leaves my mother reads,” she continues. “She has this incredible empathy, she can really read someone, see their life story and how it evolves from that. Mum always just knew.”

From that we go on to talk about female power, how it evolved and was stifled, suppressed, and how new stories were then told about a woman’s place and what female sexuality means.

We leave the cafe to walk over to the National Museum on Kildare Street to see the sheela-na-gig on display there. These medieval carved figures are of naked women displaying an exaggerated vulva. Their origin and meaning is the subject of huge debate, not least because they were frequently found on churches. We walk through the museum to find the sheela on the balcony. It’s separate from the rest of the exhibits, with a small ragged label in place of the large explanatory plaques elsewhere. Jones is enchanted, and speaks about the power of objects to change things.

I’m not cross with men in general, though some in particular. But seriously, I’m not that separatist

“This is female power,” she says. “How can we have the Eighth Amendment when we have this in our culture?” she asks. “Look at how she’s baring her teeth.

“I’m not cross with men in general, though some in particular,” she says, laughing. “But seriously, I’m not that separatist. I think we have to change the entire social order. Do you think it’s possible? I think it’s inevitable. It has to happen.”

There’s a pair of benches beside the sheela, and our presence sitting there attracts some Italian visitors who mistranslate our explanation of the carving as meaning she was Gustav Courbet’s inspiration for his 1966 painting L’Origine du Monde. We smile at how new truths take root, before Jones becomes serious again, turning to what is happening under Donald Trump’s presidency: “It’s like the time before capitalism, we’re talking about a transformation to a whole new world order. We have to be part of it, or it will happen to us. It’s going to happen anyway, so are we going to let them burn us at the stake again?” Maybe not, if the witches assemble and if we let them help us get it right this time.