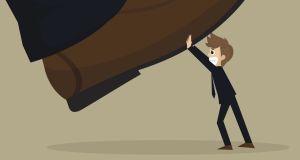 Most people don’t lodge their work-related employment claims immediately, but the clock starts ticking from the time of the incident, not when the complaint is made. Unless workers have a very good reason for a delay, six months is going to be a hard deadline in most cases

The creation of the Workplace Relations Commission (WRC) has been called the biggest change to industrial relations and employment rights in 70 years of the State.

On October 1st, the commission came into being as an independent, statutory body under the Workplace Relations Act 2015. It takes on the roles and functions that had previously been carried out by the National Employment Rights Authority, the Equality Tribunal, the Labour Relations Commission and the Rights Commissioners Service, as well as the first-instance functions of the Employment Appeals Tribunal which oversees complaints and referrals. “It’s designed effectively to create a one-stop shop for all employment claims that were previously dealt with by a multitude of different bodies. All claims relating to pay, holidays or working time will be dealt with by the WRC,” says Patrick Walshe, partner and employment law expert at commercial law firm Philip Lee.

Why has it been created?

It led to an infrastructure that was badly in need of reform. The five separate organisations sometimes had overlapping objectives. Employment-related appeals frequently fell under multiple categories, which led to unnecessary duplication of functions and a complex maze to navigate for workers. Walshe recalls one case last year that involved several different statutory claims, including some nonpayment of wages and holiday pay not made. “That resulted in a farcical situation where half the claims were appealed to the Labour Court and half to the Employment Appeals Tribunal. You can’t justify a messy, complicated system like that,” he says.

Tom O’Driscoll, head of the legal rights unit at trade union Siptu, likens the old system to a map of the London Underground.

“There were so many forums and overlapping pieces of legislation. And you had a lack of operational consistency: some processes were more formal than others, and they had different rules of evidence. The Employment Appeals Tribunal was adversarial whereas the Equality Tribunal was more inquisitorial,” he says.

Long delays were also common. Legal experts say a case in the Equality Tribunal could sometimes take longer than a case in the High Court, and the trade union movement was unhappy with what it called “excessive” waiting periods of up to two years for some cases to be resolved.

How will the commission work?

However, completing this form is tricky as people must tick the appropriate box for one or more of the statutes that apply to their grievance. That’s because, although the commission simplifies the institutional industrial relations framework, the underlying law remains the same.

“You still need to know precisely what your claim is. One of the potential downsides for employees is that if you’re a little too hasty and you don’t make the right claim, the Act sets fairly strict deadlines for taking claims – in general you’ve got six months. If you’ve ticked the wrong box and it takes a while to come to hearing, you may be out of time for the claim you want to take,” Deegan says.

Most people don’t lodge their claim immediately, but the clock starts ticking from the time of the incident, not when the complaint is made. Unless workers have a very good reason for a delay, six months is going to be a hard deadline in most cases.

Will it cost money to take a case?

The UK government did introduce fees for taking employment claims in a widely criticised move, and it led to the number of cases plummeting.

There are plans for a €300 fee for an appeal to the Labour Court in specific cases where the party appealing has not turned up to a hearing at the commission.

Will it be faster than the old system?

“Speed has to be crucial because justice delayed is justice denied. We need hearings fairly quickly from the time when they’re first referred and we need a quick appeals process to the Labour Court. There’s an emphasis on early resolution and on mediation and we’re in favour of that,” says Siptu’s O’Driscoll.

Removing the need to take multiple cases should also reduce the costs involved, which is good news for everyone.

“I think it’s positive for both employees and employers, because the delays inherent the system were an injustice in themselves. Having one first instance hearing and appeal makes it quicker and cheaper. It think it comes down to those two very precious commodities: time and money,” says Deegan.

Behind the scenes, the commission will also use new IT systems for scheduling and case management to maximise the availability of adjudication officers and mediators. The commission expects to make “considerable savings, both in time and in costs” through these systems.

Have there been any cases in practice before the commission yet?

For example, the Employment Appeals Tribunal will continue to operate until it deals with the cases that were before it when this Act came into effect and will only then be dissolved. In a blog written on October 1st, HR consultant Seán McHugh of Bright Contracts said the EAT had about 3,500 cases outstanding. “The average waiting time for a hearing before the EAT is currently 63 weeks. In some areas, it is significantly longer,” he said.

1 Chris Johns: Economies may enjoy ‘roaring twenties’ if ministers learn lessons
2 Wet pub openings fuelled rise in Irish Covid infection rates – report
3 Basic income for all: Has the Covid crisis given us a new economic model?
4 Profits jump threefold at LinkedIn’s Irish unit to $294.2m
5 ‘I don’t need to do any of this. . .I don’t actually need to work.’
6 Admission of mistake in Oxford vaccine dose raises doubts over reliability
7 Only way is up for Stripe as valuation skyrockets
8 Oxford-AstraZeneca vaccine may be trialled again to prove results were ‘not a mistake’
9 How long can Government afford to keep State pension age at 66?
10 Ireland’s Covid-19 economy in five graphs
Real news has value SUBSCRIBE