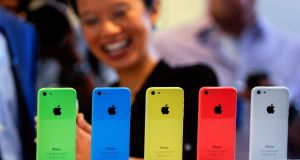 The share of Apple’s leadership who are black has remained 3 per cent for the past five years. File photographer: David Paul Morris/Bloomberg

The weirdest tech event I have ever attended was a conference held a couple of years ago by secretive augmented-reality goggle-maker Magic Leap.

It wasn’t so much the goggles, which were supposed to be weird, it was the keynote conference that stood out. Over three leg-numbing hours, a company hyped for its vision of the future managed to illustrate just how retrograde the tech industry can be.

Things started out well enough. Hundreds of us left the sunshine of a warm October morning to fill a dark auditorium in downtown Los Angeles so that we could hear Magic Leap founder Rony Abovitz explain his plans for the future of the internet and wearable tech.

After a couple of jokes, Abovitz surprised everyone by declaring that he wanted to cede his opening remarks. The world felt broken, he said. He wanted to give space to other voices.

If coronavirus has made your sense of time a little fuzzy, October 2018 was still the height of the #MeToo movement. Unbalanced representation had become a mainstream conversation for companies around the world. Abovitz’s public pledge for inclusivity was not unusual but handing over the first 15 minutes of his company’s first major conference was.

Okay, it was a bit dorky but the message that spatial computing could be an inclusive new medium was a welcome one. Head of marketing Brenda Freeman, one of only a handful of black women I have ever seen onstage at a tech conference, talked about the company’s plans to support minority creators. (Freeman has since left the company.)

Robin Hunicke, a female game developer, gave a speech about the ways in which developers had the chance to shape a better future. The people in the audience around me all nodded in support.

The problem was that immediately after making this bold opening statement, Magic Leap invited a procession of mostly white men to the stage to talk about the company and the future of augmented reality.

Hanging around afterwards, I asked two people sitting nearby what they made of the company’s decision to arrange its conference this way. One shook her head. The other called it confusing.

Magic Leap’s well-intentioned but revealing event has been on my mind over the past month as US tech companies rush to promise change in the wake of global protests against racism. The pledges suggest a busy few years for HR departments.

But these promises also serve as a reminder of past failure. Diversity reports over the past few years show that while gender representation has improved at the biggest tech companies, ethnic diversity has hardly budged.

At Facebook, the proportion of the workforce who are black has inched up from 2 per cent in 2014 to 3.9 per cent this year. At Alphabet, Google’s parent company, the share has increased from 2 per cent to 3.7 per cent over the same period.

Not that you would know this from the adverts and promotional material that the companies produce. I once totted up the difference between diversity in tech adverts and the composition of tech workforces for a wonkish Lex column, and found the same yawning gap across the industry.

At the leadership level it is even starker. Take Apple, whose videos for new products such as Apple Watch employ a noticeably diverse cast. The share of Apple’s leadership who are black has remained 3 per cent for the past five years.

Companies have been trying to improve diversity among new hires for years. The problem may be getting people to stay. Being a minority of one in a team or being asked to take on the extra work of representing a company that wants to demonstrate its diversity is wearing.

Ellen Pao, chief executive of non-profit Project Include, which uses data to improve diversity in the tech industry, suggests companies must focus not just on who they hire but on who chooses to leave. It is data that could offer valuable information on corporate culture.

Attrition is just as important as hiring. Workers have grown wise to big promises. Tech has always been good at selling itself but diversity theatre is not enough. – Copyright The Financial Times Limited 2020

1 Air travel never going ‘back to way it was’
2 Should I switch bank now with Ulster Bank at risk of closing?
3 Will brother’s widow get half of our parents’ estate when they die?
4 ‘Tax war’ will hit Ireland if digital tax talks fail, OECD says
5 Finance Ireland refinances mortgages with low level of payment breaks
6 Majority of submissions favour changing law on forestry licence appeals
7 So you want to invest in the stock market: what will it cost?
8 Pallet manufacturer looks to imports as timber crisis takes root
9 Tánaiste urges businesses to brace for Brexit with 100 days to go
10 Disney activist fights for change
Real news has value SUBSCRIBE