Katie Martin: The countryside is not the tranquil paradise urbanites imagine 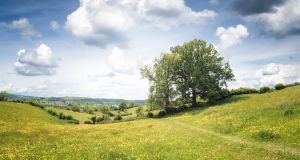 Nice view, but what about the wifi? Photograph: iStock

It’s a tempting idea: now that we all work from home (ie live at work), why stick with the city? Why not pack up and whisk the family away to Plopsbury-on-Tweed to live a bucolic life next to a babbling brook?

The children will thrive in the fresh air, running ruddy-cheeked through the local fields while you crack open the laptop to contribute to society without the hassle or germs of a commute, gazing in your more thoughtful moments over your uninterrupted views of nature.

What’s more, your cramped two-up-two-down in London’s Muswell Hill will free up enough cash to buy a rambling pile out in the sticks. The office is so 2019. Move out, breathe, write blogs about how great your life is outside the Big Smoke. We’d all be fascinated.

Like I say, it’s tempting. Unless, as in my case, you grew up in the back end of nowhere and wild horses could not drag you back.

Allow me to recline on my psychiatrist’s chaise longue and be clear that I had a happy childhood in the Wirral countryside. I grew up on a farm, cheerfully dodging death on a daily basis around tree swings, machinery, bulls and slurry pits, darting about on my bike to visit my grandparents (my Nana made the best Victoria sponge this side of the Bake Off tent).

We kids largely looked after ourselves. Grubby, frequently black-eyed, and often found playing on the roof of the house or on top of the round bales that my dad constantly told us to leave the bloody hell alone. Our school had as many kids in total as my children had in each year of their east London primary.

Some people clearly want to get out of the city, and good luck to them. Estate agent Rightmove reported in May that more than half of property inquiries from Londoners were for homes outside the capital, up from 43 per cent at the same point in the previous year.

But for me the idea of packing up and heading outside of the A406 is a total non-starter. The notion of living more than 200m from a Turkish shop brings me out in hives.

Sure, I enjoy very few of the pleasures that London has to offer. Theatre, art and nightclubs are not exactly weekly pursuits, even outside of lockdowns. But when it comes to the stuff that pays the bills – work – I know I have functioning wifi and generally compliant mobile phone reception. These are not things to be taken for granted in the rambling countryside stuffed with community groups blocking the construction of phone towers.

Also, the truth about country living is that if you decamp from the city you will always be “those new people” decades after you move in.

Londoners don’t care how long you’ve been there unless it is part of an argument about whether you arrived before or after the hipster gentrification of your neighbourhood.

And within reason, no one cares what you’re up to. In the countryside everyone knew, or was related to, everyone else. Minding your own business was antisocial and frowned upon.

It’s not the tranquil idyll that those sick of London perhaps imagine. Burglaries in remote spots are relatively easy to carry off.

Working remotely makes more sense now than it has ever done before. But the warm glow of knowing your Zoom background casually displays a window overlooking that babbling brook will soon wear off when your internet connection drops off for the fourth time that day.

My guess is that the smug ex-city lifestyle blogs will start to die off when the former Londoners are frowned at in the local pub for spending more than three seconds deciding which red wine they would like to order, or smirked at in the street for wearing posh wellies, or when they get the house turned over by local ne’er-do-wells for the second time in a year, or when really all you want is some sumac. Is that so much to ask? Surely someone round here sells sumac?

They do not sell sumac, and no, the wifi is not likely to work later either.

1 Air travel never going ‘back to way it was’
2 Should I switch bank now with Ulster Bank at risk of closing?
3 Bank of Ireland sees more than 1,400 staff apply for redundancy
4 South Dublin land at €19m has scope for up to 500 homes
5 Coronavirus vaccine: 15 billion doses needed to inoculate the planet
6 BoI redundancies, ‘tax war’ warning for Ireland, and retailers in rent arrears
7 Hostelworld chief financial officer TJ Kelly to step down
8 ‘Tax war’ will hit Ireland if digital tax talks fail, OECD says
9 French investor acquires Cherrywood office investment for €27.7m
10 Will brother’s widow get half of our parents’ estate when they die?
Real news has value SUBSCRIBE