Social media: a virtual window into your business 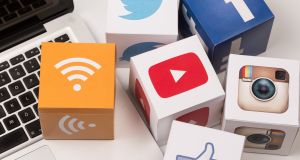 Having a website is still the most important thing for companies in terms of an online presence, said Damien Mulley, a digital marketing consultant. Getting one up and running can be expensive, especially for a start-up. Studies have shown that many small businesses don’t have a website and even more don’t sell online.

While social media can help direct traffic to a website, it can also be useful as a standalone way of connecting with customers and creating an online presence.

Using social media can help a business engage in “brand building” to get people talking about your business and creating a brand that people can identify with, says Mulley. Sarah Tobin and her sister, Debbie Thornton, have yet to officially launch their business, Young Hearts, a specialist online children’s clothes store. But Young Hearts is already building a strong presence on social media.

Young Hearts will officially launch on September 1st, and the partners see building their social media presence as an important way to establish a customer base.

“We are building an audience of people interested in kids fashion,” says Tobin. With a limited start-up budget, she says, they are “using their existing networks and free social media platforms to find potential customers”.

Tobin aims to encourage customers to visit their website and ultimately buy their products. But social media can be useful for businesses that don’t have a website or don’t even sell their product online.

“I think social media is an integral part of any small business,” she says. “You are basically creating a window to your shop and, if you are located in an area where you don’t have massive footfall, by using social media platforms you can drive traffic to your business.”

Of the many social media platforms to choose from, Facebook remains the most popular. Many, many businesses are trying to connect with its millions of users.

“There are two million Irish people alone using it every day and a billion people around the world using it every day. So it is a huge audience you can get access too,” says Mulley. However, it’s hard to compete, he warns.

Facebook encourages small businesses to use its platform, and it hosts “Boost Your Business” events around Europe. It holds workshops and gives advice on using Facebook and Instagram.

Despite this engagement however, many small businesses find themselves crowded out from the Facebook timelines of their customers.

“We have to pay to boost the post,” says Tobin, an extra cost for a cash-strapped start-up such as Young Hearts.

Mulley says part of the difficulty with Facebook is that there is simply so much traffic. The algorithm determines what you see on the basis of what you interact with: “You are competing with your friends sharing cat videos.”

Businesses make the mistake of thinking they can just post updates about their business,he says, but “you need to create engaging content” that people will want to share.

If you do, the pay-off can be great. “Every single demographic is on it from young to very old,” Mulley says, but to go after that, “you have to have content that people find interesting”.

Many businesses will use more than one social media platform, which can help connect with different demographics.

Young Hearts uses Instagram and Snapchat as well as Facebook. Tobin find it has different people following on each. “I don’t think we have much crossover in terms of fans, with people choosing to follow us on one or the other platform.”

Instagram has become popular with many businesses. But without the ability to easily link out of it to a website, it is more about building a brand, Mulley says. “It’s good for building an affinity between you and the general product.”

Tobin regularly posts photos on Instagram in a fun and informal way and finds that it builds a connection with people. “People buy [into] people,” she says. “So we want people to know who we are, to buy into what we do and what we stand for.”

Snapchat, the newer social media platform, has a younger demographic, and many businesses are starting to become active on it.

Sheila Considine says that while she only recently joined Snapchat, she has found it useful and “a fun app to interact with customers”. she can see it becoming her favourite.

Mulley says Snapchat is a good way to connect with a young audience, but some brands don’t use it properly – and that’s worse than not using it. They “have zero clue of what they are doing”, he says.

It’s too soon to know how useful Snapchat can be for companies, he says, unless you are after the 15-24 demographic. In that case, if you aren’t on it, “it’s bad for your company”.

Tobin’s Young Hearts has already had a lot of engagement on social media, with a lot of likes and shares of her Facebook and Instagram posts. She is hoping this will translate into sales when the site launches officially.

Her advice for anyone looking to get on social media is to “develop a brand identity and stay true to that. You want to stand out from the crowd and be different in some way.”

Mulley says the most important thing is to simply “get out and do it”.

“The real value is getting other people talking about your business. build an affinity with them and get them to be your advocate.”