Even with right on your side, is settling a disagreement in court worth the hassle? 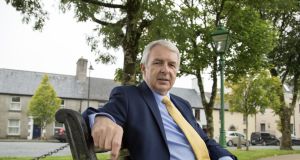 Pamex founder Tom Murphy: “I knew we were getting into something that could potentially be very expensive.”

Pamex is small pharmaceuticals marketing and distribution company based in Castlebar, Co Mayo. Chauvin is a large French ophthalmic company, owned by giant multinational Bausch & Lomb. Earlier this year, Pamex won a big victory for the “little guy” when it was awarded in excess of €500,000 in damages against Chauvin in the French courts.

Pamex was Chauvin’s exclusive agent in Ireland for more than 15 years. During that time, it built the French company’s sales to €2 million and Chauvin products were an important part of Pamex’s turnover.

When Chauvin decided to change its distribution model in 2011, Pamex founder Tom Murphy was astounded to discover the French intended to walk away with nothing more than a thank you, leaving him with a big Revenue gap to fill.

Murphy is a measured, soft-spoken individual who is very proud of the business he has built from scratch with his wife, Mary, over the last 23 years. He is equally proud of the fact that Pamex survived tough times during the recession due to the sheer hard work of all involved.

Murphy’s sense of fair play was outraged by the French company’s behaviour and, with a great deal to lose, he decided to take legal action against it. Little did he know, he was talking on a battle that would last seven years and cost him more than €100,000 to win.

Pamex employs 16 people and is probably best known as the company that brought the shaving oil product Total Shaving Solution to Ireland some 20 years ago.

Prior to setting up Pamex, Tom Murphy was general manager of Syntex Pharmaceuticals. “Life was good but that all changed when Syntex was taken over,” he says. “My post was made redundant and I was a father of four on the dole queue. I decided to use my experience and local knowledge to help manufacturers seeking a foothold in the Irish market, and since then Pamex’s focus has been on building a portfolio of products that make life better for people.

“Thousands of people who suffer from dry eyes, dry mouth and dental problems get great comfort from using products we introduced to the Irish market.”

Murphy initially consulted a local solicitor, Rory O’Connor, to see if he had a case against Chauvin. Having established that he did, Murphy thought long and hard but eventually decided to pursue it.

“Initially we got no reaction from them. I think they thought we were a nuisance and that we would eventually go away,” he says. “We hired a French lawyer and it wasn’t until we actually lodged the legal papers that they sat up and took notice. That took nearly two years.

“I knew we were getting into something that could potentially be very expensive, but we worked out an estimate of costs as best we could and discussed the costs involved at each stage of the process.”

Bringing the case was a slow and tedious process and, when it eventually got to court, some five years later, Pamex lost.

“We actually lost on a point of law, not on what, for me, was the substantive issue – a legal and commercial right to damages,” Murphy says. “Rather than giving up at that point, we dug in even deeper and went about pulling every document we had together to build a picture for the French judges of how business works in Ireland. They didn’t ‘get’ that there are fundamental differences because our market is much smaller and personal relationships with customers are much stronger. We had to make sure they understood this and that nothing got lost in translation, as it were.

“This was all by written submission. We never had the opportunity to put our case in person and Chauvin did challenge us quite vigorously. We were invited to enter mediation and, while we agreed to this, the other side did not. I think that may ultimately have worked to our benefit. At one point, we were offered a very small amount of damages but we declined on the advice of our lawyer.

“Eventually, in February of this year, the case was heard before three judges and, in mid-April, they announced their decision, which was unanimously in our favour.”

Murphy says he often felt like giving up, not least because the case ate into his time.

“I am fortunate in having a good team and they kept things going when I had to divorce myself to focus meticulously on some aspect of the case,” he says. “For months at a time nothing happened, so you need persistence and unbelievable patience if you’re going to go this route. Was it worth it? Yes – there was a lot at stake.”

Gerard Ryan, partner and head of corporate and commercial at Eversheds Sutherland, advises companies thinking about litigation to “make sure you have a good case, agree a budget with your legal team, remember there is always a risk of not winning and ask yourself if you are prepared for the time involved and for emotional and financial toll it may take.

“Taking a case in another jurisdiction adds a layer of complexity.

“Commercial disputes happen, but try to avoid them by taking the time to set up a very strong contract at the outset. It’s not always something people do or even think about because they are keen to get on with doing business. But if you have one and an issue arises you have recourse to it.”

1 Why is Germany suddenly embracing its inner Keynesian?
2 Tesco to cut emissions by converting waste food from Irish stores to gas
3 Passengers face queuing in car parks at Dublin Airport
4 Major credit union plans to limit savings accounts to €40,000
5 Prospect of foreign travel highlights remaining restrictions here
6 Ikea among major retailers to reopen next week
7 Tesla’s Elon Musk calls for breakup of Amazon in tweet
8 Brother is dragging his heels as executor of uncle’s will - is there anything I can do?
9 Domestic economy may get boost from multinationals
10 Penneys will not reopen on Monday despite expected changes to lockdown rules
Real news has value SUBSCRIBE