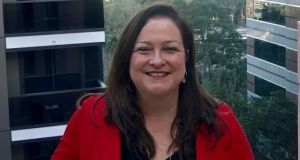 Helen Waldron: “What they look upon as my skill is mercurial, the ability to walk into a room, engage and interact, and that’s absolutely based on being Irish and female.”

Sydney-based Helen Waldron got a surprise near the end of her time at Loreto College, Foxrock. “To my horror, at our last assembly, they called me up for a prize in religious education because they thought I might become a nun. [Maybe it was because] two of my aunts were nuns.

“That summer I was paid a pound an hour to mind the tennis courts in case anybody wanted to rent them. I think it was their way of seeing if I had a vocation. They’d send nuns out with cups of tea and sandwiches.”

But Waldron had no religious vocation, and initially did not have a business vocation either, electing to study English, history and philosophy at UCD. “I had just turned 20 when I finished my degree, so I knew I had a bit of time to figure out what happens next, but I had no notion of a business career.”

After a couple of years of working in the United States, three months’ teaching English in Hong Kong and backpacking across Asia, Waldron arrived in Sydney in 1988. “It was just the next English-speaking country I could get a work visa for. I didn’t know much about it and never particularly had a hankering to go there.”

But in the three decades since, Waldron has turned an almost flippant decision into great success.

“The first job I got led to everything that followed. It was one of those food and accommodation – buy one, get one free – publications which turned out to be a bit of a scam, though I didn’t know it at the time. I would sell $390 three-year subscriptions for this guide, but I left when a TV show exposed it as a sham. My boss was pushing a cameraman back into the lift saying ‘No comment’ as I arrived at work.

Luckily, the last person I tried selling a subscription to said ‘I have no interest in what you’re selling, but you’re brilliant at it. I’ll hire you’, so I ended up working in sales for a computer company.”

After getting bored with that, Waldron ran the expert opinion business for the commercial arm of the University of New South Wales. “My role was basically as a connector or translator for very tightly academic subject-matter experts trying to get into a marketplace.” (So, if you have ever wondered where “independent, objective experts” used in court cases come from, wonder no more.)

When she took the job, the business had a turnover of $100,000 and grew to $10 million by the time she left 11 years later, having expanded its reach beyond Sydney to across the country and to other universities.

For the past 16 years, Waldron has worked for the Australian Industry Group (equivalent to Ibec in Ireland). “At the uni, the business I was running was funding commercialisation of technology and giving academics an extra income stream, while at AIG it’s about representing industries such as manufacturing, construction and defence. We’re very well balanced. We work collaboratively with unions, agreeing on some things and disagreeing on others. We’re considered very practical, independent and well researched.”

Waldron’s title at AIG is somewhat unusual – business connector. “That’s my role in one word, it’s about connecting, it’s about pulling the threads together and making sure we are talking to the right people about the right issues.”

Waldron says Australians’ view of themselves is not always the reality. “They have this whole laconic, mateship thing going on, which I find bemusing, to be frank. I think some of the characteristics they claim don’t necessarily show through.

“Irish people in business, from my understanding and engagement with them, are a lot more transparent, open and up-front. Australians claim to be more laconic, but they’re not, they’re more shielded. It takes Australians a bit more time to warm up.”

Being Irish has never been an obstacle. “In pretty much all situations it is an advantage. I used to hope people noticed I was not just this outgoing Irish woman, I hoped they also noticed I was smart. But I’ve realised there is no need to think that way. I work with subject-matter experts who can often be introverted, and they can’t do what I do. What they look upon as my skill is mercurial, the ability to walk into a room, engage and interact, and that’s absolutely based on being Irish and female.”

Waldron’s success has led to her working closely with the Irish consulate in Sydney and the Embassy in Canberra when there are visiting government or business delegations. She is also involved with the Irish Australian Chamber of Commerce as a judge in their awards and mentoring young Irish business women in Australia.

Bertie Ahern was talking to Waldron at Sydney Opera House after one of those Irish functions in 2000. The then taoiseach had just given a speech about Ireland wanting emigrants to go home to a booming economy. But looking out on the harbour on a glorious sunny day as a ferry horn blew, he said: “But sure why would you want to leave this?” Waldron knew she did not.