Pregnant and working? You may still face discrimination

Survey shows women are being dismissed, made redundant or mistreated 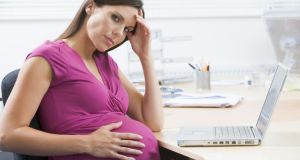 Career worry: A recent comprehensive study found that both pregnancy and maternity are times when women face increased workplace discrimination

While it can undoubtedly be a bit scary, particularly first time round, pregnancy is usually a period of great joy for families. Sure there might be concern about the health of the unborn child, and the horror of morning sickness to deal with, but most soon-to-be parents enjoy the experience.

A recent comprehensive study has found, however, that both pregnancy and maternity are also times when women can face increased discrimination in the workplace.

The study of more than 3,200 women, which was conducted by the Equality and Human Rights Commission in the UK, found that 11 per cent of the women interviewed reported having been dismissed, made compulsorily redundant where others were not, or treated so poorly that they felt they had little choice but to leave their jobs.

The survey’s authors suggest that if replicated across the whole of the population, it could mean that up to 54,000 women may be forced out of the workplace in Britain each year.

Research shows that employers across a range of industry sectors believe they are firm supporters of women both during their pregnancies and on their return to work. But the study findings indicate that the reality is somewhat different.

According to the report, one in five new mothers say they experienced harassment or negative comments from their colleagues, employer or manager when pregnant or returning from maternity leave.

If that weren’t enough, a quarter of those surveyed reported too little contact with their employers during their maternity leave.

Even when it comes to enlightened employers who offer flexible working arrangements, the news isn’t encouraging. The research found that when mothers were allowed to work flexibly, around half reported negative consequences, such as receiving fewer opportunities at work or feeling that their opinion was less valued.

What’s most depressing about the survey is that it shows discrimination seems to be increasing.

A similar study undertaken in 2005 by the Equal Opportunities Commission estimated that 30,000 mothers, equivalent to 7 per cent of those surveyed were forced out of their jobs each year.

It could be tempting to sit back and smugly mock the Brits for their callous attitudes towards women but before you do it’s worth looking at how Irish employers treat those who are pregnant.

While research into the issue isn’t as up-to-date for Ireland it paints a similarly bleak picture.

The only comprehensive major study of its kind carried out here is Pregnancy At Work: A National Survey, which was undertaken by the Economic and Social Research Institute (ESRI) and published in 2011. It interviewed 2,300 women whose youngest child was born between July 2007 and June 2009 and found that 30 per cent of those who worked while pregnant experienced discrimination. A similar figure reported problems surrounding maternity leave.

Other forms of unfavourable treatment included loss of salary or bonus or denial of promotion, being given unsuitable work or workloads, receiving unpleasant comments from managers or co-workers, and as in the UK study, being discouraged from attending ante-natal appointments during work-time.

One of the report’s co-author’s, Dorothy Watson, associate research professor at the ESRI, said the economic downturn may have led to a change in the situation for those who are pregnant or have returned to work after maternity leave.

“It is hard to predict in advance how things will have changed since the recession. On the one hand, we know that pressure has increased in many sectors during the downturn: job losses in the private sector have contributed to insecurity, while in the public sector, work pressure has increased due to a rising demand for services combined with recruitment constraints,” said Ms Watson.

“Alternatively, the recession might have had the overall effect of ‘culling’ the jobs with fewer rights and protections, so that working conditions look better in the remaining jobs.

Another question that remains unanswered is whether, with the return to economic growth, we will see an increase in jobs with fewer protections and rights,” she added.

For those that do find themselves being discriminated against here, help is at hand.

“Pregnant employees in Ireland benefit from a wide range of protections in law. A core principle of the Maternity Protection Acts, 1994 -2004 is that an employee cannot be dismissed during her pregnancy and, additionally, has an iron-clad entitlement to return to the same, or equivalent job,” said Patrick Walshe, partner and employment law expert at the legal firm Philip Lee.

“In addition, any dismissal related to pregnancy (which would include a dismissal that doesn’t take place during the actual pregnancy itself) is automatically deemed unfair by law.

An employee in this situation doesn’t have to satisfy the usual test of having 52 weeks of continuous service,” he added.

Mr Walshe goes so far as to suggest that trying to fire or otherwise penalise an employee on maternity leave is “extremely foolish” with repeated court and tribunal decisions demonstrating that such actions will simply not be tolerated.

“Discrimination falling short of dismissal will also be sanctioned. The Equality Tribunal has repeatedly demonstrated that discrimination against female employees for reasons connected to pregnancy/ maternity leave will also get short shrift. There have been many cases demonstrating this, ranging from instances of refusing a promotion on the grounds of maternity leave to discriminating against a newly-returned employee by refusing to provide her with sufficient work,” said Mr Walshe.

Mr Walshe warns that employers need to be smart about looking after employees who are either pregnant or coming back to work.

“It’s fair to say that an employer must tread extremely carefully. Bringing a claim is neither difficult nor expensive,” he said.

Nonetheless, while legislation is there that doesn’t stop some organisations from trying to circumvent it.

A study published in the US journal Gender and Society in June 2014 shows that some employers have tried to get around the Pregnancy Discrimination Act of 1978 – which prohibits employers from firing staff – “by vilifying pregnant workers as encumbered and ‘undependable’ employees while symbolically amplifying ostensibly fair, neutral organisational policies and financial interests that guided their decision making,” according to the report authors.

While there’s little evidence to suggest that anything similar is happening here, such actions highlight the need to ensure there’s s adequate legal protection so that those who are do find themselves pregnant get to love and not loathe the experience. Pregnant in the workplace: What’s it like? Michelle, (not her real name) who lives outside of Dublin and works in marketing and public relations, was made redundant from a previous job when she was six months pregnant.

“It was a horrendous experience. I was expecting my first child and at the time felt very vulnerable and unable to act when I was told. It was just three months before I was due to give birth and I’d been with the company for less than a year. I resented the fact that my employer was creating this level of uncertainty in my life and feel he singled me out because he’d thought it would be easier to let me go.

Someone was kept on part-time to do a similar role as mine despite me being technically qualified to it and I feel they should have kept me on.

I think my employer probably thought “ah she’s away soon so she won’t mind” and was keen not to have to pay me or to worry about maternity pay.

Friends of mine in the legal profession said they thought I had a case and put me in touch with a solicitor who was an expert in employment law.

He also agreed there was a case but said I should weigh up whether my employer would pursue it, which I felt he would.

I was afraid of the financial implications if things didn’t go my way and was also concerned about possible exposure if it ended up in the newspapers so didn’t proceed with it.

It was obviously difficult going out and trying to find another job at that point and it felt like my world had ended.

It happened at the time of the recession and I was in an industry in which a lot of jobs were being lost so was very concerned about the future.

I got lucky in the end and found a job afterwards but the whole experience just showed me that it’s a minefield announcing you’re pregnant in the workplace, even with all the legislation that’s out there.