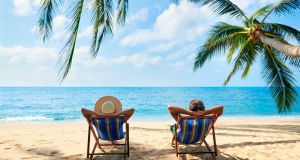 ‘There are times when one learns a lot more about one’s leader when they are away from their desk, not behind it.’ File photograph: Getty

Last week I arrived at work to find a dispiriting pile of advice had accumulated in my inbox over the new year break on how to be a great leader.

The list was long and familiar: Be authentic; inspire purpose; embrace uncertainty. None of it mentioned one bit of advice that the past few weeks have shown all sorts of leaders could use – when to cut short a holiday and get back to work.

This is a tricky thing to navigate in an age of work-life balance, when the boss is supposed to set an unplugged, logged-off example to underlings. Yet the crisis in Iran and the Australian bushfires have offered an unhappy set of lessons about what not to do.

The first is simple: when disaster hits, don’t just sit there and say nothing. Only the churlish would have begrudged Boris Johnson a holiday after a hectic year of Brexit and electioneering.

And when the British prime minister flew to the Caribbean island of Mustique for a new year break, no one knew the United States was about to assassinate an Iranian commander in Iraq, where hundreds of United Kingdom troops are stationed. But his silence in the immediate aftermath of the January 3rd attack was odd and self-defeating.

He could have forestalled at least some of the predictable criticism lobbed at him for being away if he had said something, anything, faster.

Better yet, he could have done what Google boss Sundar Pichai did in 2017 when one of his employees wrote an inflammatory memo blasting the company’s diversity policies. Pichai had just started a summer family holiday when the flap erupted but immediately returned to work to deal with it. The employee was quickly fired.

The Google row was trivial compared with what is happening in the Middle East, but the lesson still applies: no boss ever loses by cutting short a holiday to manage problems in the office.

Scott Morrison demonstrated comprehensively how not to handle a holiday, with or without a crisis

That rule should be even more obvious when it is your job to deal with the problem. Yet David Elliott shows it is not. Elliott was in the army before he became emergency services minister last year in the Australian state of New South Wales and is fond of colourful banter. “I will rip your head off and s**t in the hole,” he joked on Facebook last month to a friend whose media coverage had just outshone his own.

Elliott soon had plenty of headlines himself after inexplicably heading off to Europe on a Christmas holiday as his state was ravaged by horrific bushfires.

As one commentator asked, “what is the point of having an emergency services minister who goes on holidays during a state of emergency?” Elliott cut short abruptly what he admitted had been an “inexcusable” absence and flew home.

Yet his effort pales before that of Australia’s prime minister Scott Morrison, a leader who has demonstrated fully how not to handle a holiday, with or without a crisis.

Even the most junior worker understands the importance of leaving an out-of-office message when going on leave so people know who to contact in your absence. When Morrison went on a family holiday to Hawaii last month, no official public notice was issued about the trip. One journalist who asked the deputy prime minister’s office who was in charge was referred back to the prime minister’s office, which later suggested that rumours Morrison was holidaying in Hawaii were incorrect. As it turned out he was, until he too was forced to make a humiliating retreat home as the bushfire death toll mounted.

Yet that was not the end of it. Another leader might have made a contrite apology at such a time and left it at that. Morrison did express regret but he also tried to defend his absence with the memorable observation that Australians understood he was not needed personally to put out the flames.

“They know that, you know, I don’t hold a hose, mate, and I don’t sit in a control room,” he told a radio interviewer. “The brave people who do that are doing that job.”

It was a final, unfortunate reminder that there are times when one learns a lot more about one’s leader when they are away from their desk, not behind it. – Copyright The Financial Times Limited 2020