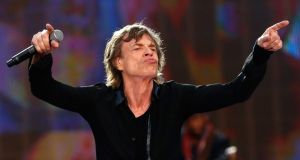 Mick Jagger in action: Generation Jagger is described as “the great underutilised resource” by Pat Divilly, founder of the recently launched online platform Mature Gurus, which connects experienced business people with those in need of their skills. File photograph: Simone Joyner/Getty Images

Baby boomers, Generations X and Y and Millennials are the familiar names used to describe cohorts of people born around the same time. Less familiar, but likely to register a lot more on the radar in the years ahead is Generation Jagger, a descriptor for those over 60. In Ireland that’s almost 900,000 people and this growing group will account for 20 per cent of the population by 2020.

Generation Jagger is described as “the great underutilised resource” by Pat Divilly, the founder of the recently launched online platform Mature Gurus, which connects experienced business people with those in need of their skills.

“These mature individuals typically leave full time employment at the peak of their careers but their expertise is not wiped out the day they leave full time employment,” he says. “In many ways they are everything that the Millennial generation is not. Hiring raw young talent is a bit like playing lucky dip. Hiring a ‘mature guru’ is more like winning the lotto. You get the benefits of a carefully crafted 40-year career.”

Divilly points to sound commercial reasons why the talent and experience of Generation Jagger needs to be recognised and used. “There are over 160,000 SMEs in Ireland but most of them are not scaling up. At the same time the failure rate among startups is as high as 80 per cent,” he says.

“SMEs and startups frequently don’t have the mix or depth of skills required to support their growth or meet the challenges they face. Research shows that the main cause of lack of scaling and start-up failure is a deficiency in expertise and management experience. Surely it makes sense for these companies to engage with somebody with a lifetime’s experience and a professional network who could help?”

Divilly, now 68, believes in putting his money where his mouth is. In September this year he launched Mature Gurus after a 47-year career in business that included management roles with Digital in Ireland and Europe, and almost 30 years running MarketWare International, which provides marketing and business consulting to the IT and ecommerce sectors.

Divilly, an engineer by profession who has an MBA from NUI Galway and a diploma in Technological Entrepreneurship from Stanford Graduate Business School, is also the founder of The Business Tools Store, a mentor with the Dublin City Local Enterprise Office and a senior industrial adviser for the European Bank of Reconstruction and Development.

“I have spent three decades working with startups and SMEs and more recently I have spent time on various mentoring panels,” he says. “I began to notice as I got older that the things that were obvious to me after so many years of wrestling with similar problems are often seen by younger people as a major breakthrough. From this, I began to realise that people like me could be a great resource for the next generation of businesses. I also knew from experience that companies often value an outside opinion to avoid ‘group think’ in their organisations.”

Divilly began sounding out the retirees in his network and found that many of them missed the social interaction of the workplace and the chance to contribute and challenge themselves.

“Sixty is the new 40 and these people are not ready to be written off,” he says. “The gig economy is becoming mainstream and the challenge for me was to come up with a model that addressed the needs of both the companies and those who still wanted to be engaged in the business environment. Mature Gurus is the result.

“The need for mature gurus is not exclusive to SMEs or start-ups,” Divilly continues. “Multinationals and large companies also have projects that may require expertise not available in-house or they may need to supplement their in-house resources at times. Indeed, a scenario that may become very real in the next few months is where an SME, in an attempt to mitigate the worst effects of Brexit, gets some initial traction in the German market for example. Imagine the benefits to them of leveraging the wisdom of somebody with 20 plus years experience in the target industry in Germany.”

Divilly stresses that Mature Gurus is not a general jobs site. “We are specifically focused and our intuitive model is easily understood by all interested parties. How we charge is also clear, transparent and competitive. It is free for gurus to use while it costs an enterprise €50 to post a project. This is the total cost. There are no additional commissions or percentages due on the value of the project.”

Mature Gurus will be focused on Ireland initially with plans to expand internationally into English-speaking markets. With a background in IT, Divilly has been able to develop the platform himself and bootstrap the venture.

“The costs to date have been my sweat equity - developing the model, selecting and customising the software, developing the website and beginning to roll out the launch and initial marketing plan. If I were invoicing a client for the work involved it would be at least a five-figure amount,” he says.

Mature Gurus has been live since the middle of September and so far Divilly knows for sure that at least two connections have been made.

“There has been a lot of traffic to the website with people checking it out, but it will be a slow burn until people get to hear about us and the number of projects and gurus begins to rise,” he says.