More work to do on diversity in business

Equal opportunity is still not the norm in the workplace. More focus is required to get the most from your staff 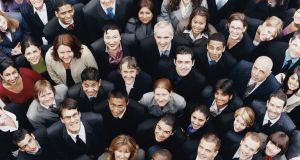 In a year when the general election will feature female gender quotas for the first time, diversity in Irish businesses is – to borrow a political catchphrase – a case of “a lot done, more to do”.

Just over one in three companies have no strategy to promote talent diversity in their ranks, a survey of HR directors by PricewaterhouseCoopers found. The issue becomes more acute in specific sectors.

In financial services, PwC found 73 per cent of female millennials worldwide don’t feel they have equal opportunities, despite their organisations’ commitments to diversity. Almost 30 per cent of women who came into the workplace in the past decade don’t feel there are female role models in senior positions for them to emulate.

Yet there’s a growing body of research to show diversity is good for business. By analysing return on investment data from listed companies in the United States, the UK and India, a Grant Thornton study found that those with at least one female executive board member outperformed those with male-only boards by a significant margin. In the US, a lack of diversity on boards was calculated to cost businesses a combined $567 billion.

Skills shortages in many industries are also forcing the issue, as companies need to attract new recruits and avoid losing female employees who risk feeling their career progression is being restricted.

The gender balance in professions such as accountancy starts out as a roughly even split between women and men, but female participation drops significantly among senior ranks, says Siobhán McAleer, commercial director of the Irish Management Institute. “Diversity has become a commercial imperative because there is a scarcity of talent. Companies see they have to nurture the people they have and encourage people into the organisation, and they can’t just focus on males because that’s halving their target market,” she says.

Maeve Houlihan, senior lecturer in organisational behaviour and work at UCD College of Business, welcomes the positive aspect of the PwC research because it means 65 per cent of Irish businesses do have a plan to encourage greater diversity. However, she questions how concrete those strategies may be.

“Ultimately, there’s a lot of lip service in this space. Even where there are strategies, often it’s a bit idealised or aspirational,” she adds.

To address this, she suggests businesses can set specific goals for reaching better gender balance at all levels. Exercises such as counting the women in the business and the roles they have can help to uncover whether opportunities really are equal for everyone, or whether there is an unconscious bias in action, she adds.

In her research into organisational behaviour, Houlihan has found a minimum of three people are needed for a different opinion to be voiced within a larger group.

“If there are only two people, very often they’re silenced. Also, if there are only one or two women in the room, they become the voice of all women, which would never be the case normally. There needs to be closer to even numbers between men and women,” she says.

Some organisations taking the lead on diversity go so far as to make CVs anonymous, ensuring potential recruits are evaluated on merit alone. “Some people might think that was over the top, but the evidence is when you do that, that you get very different results, and you see the bias of whether you chose the man or woman,” says Houlihan.

For women already in an organisation, further training and leadership development can benefit both the individual and the wider business, says McAleer. She points out that many women don’t tend to apply for new roles until they feel ready for them, but development programmes can be a way of encouraging them to advance in their careers.

“Development opens people’s minds, stretches their ambitions and gives them the capabilities to take advantage of the opportunities they see within the business,” she says.

“By investing and leadership development, businesses are seeing the results of higher engagement, and that’s a big challenge for companies. If people have a sense that the company cares about them beyond the salary, they’re more likely to give back and invest more of themselves,” she says.

Companies should also be prepared to promote based on ability rather than time served. McAleer says this immediately removes one of the biggest obstacles for women by allowing them to take time to raise a family without feeling that it compromises their career prospects when they return to the workplace.

“If women can see that they can be promoted during their maternity leave, where there is a role coming up and the company thinks they would be ideal for it, that lets people see that it’s not an either/or situation, and that they can have both. It’s in companies’ interest to have policies around job sharing and career support. As more females are participating in business at higher levels, they need to have support in that,” she says.

PwC’s research found the presence of female role models is essential for encouraging further participation by women at executive and senior roles within business. Research by Enterprise Ireland in 2012 uncovered a similar effect that has inhibited higher levels of female entrepreneurship.

“Anecdotally, business women report that having female role models, or female mentors, helps to show how it can be done. They provide practical advice on starting and running a business, and also, importantly, the how ‘I made it work’ part, balancing both work and home life,” says the agency’s chief executive Julie Sinnamon.

Sinnamon is also actively involved in the Irish chapter of the 30% Club, which was set up to redress the gender balance at board or senior management levels. Not only is this a desired outcome in itself, but it helps to swell the ranks that go on to start their own businesses.

Most of the Enterprise Ireland-supported founders leave middle to senior roles within existing businesses to start a new company but, up to now, this group has been overwhelmingly male. “We need a rich pool of female talent at this rank within business in general, if we are to optimise the number of female-founded start-up businesses,” says Sinnamon.

Enterprise Ireland’s funding programmes for female entrepreneurs have consistently higher applications than other calls, and Sinnamon believes this may indicate that women appear to wait for female-only calls before they apply for funding, or perhaps that the standard is such that females might have a higher chance of success should they apply for the non-female specific calls.

“Our ambition is that, in five years’ time, there will be no need for tailored supports and initiatives for Irish female entrepreneurs because Irish business women will no longer be under-represented in the businesses and in the boardrooms of Ireland,” says Sinnamon.

McAleer adds that no woman wants to feel she has been promoted simply to meet a quota. The broader goal of a diversity strategy is to make companies focus more proactively on their entire workforce to sustain the business.

“Don’t make this just a female issue,” McAleer warns. “It’s a business and a commercial issue. If people see it as being niche, or an agenda, rather than part of the whole business, then it becomes more marginalised and it’s not taken as seriously.

“That’s why you have to have male participation at all levels. Diversity is not a luxury, it’s a must-have for business.”