If you’re sick, don’t go to work. Get into bed and get better

Pilita Clark: Many people go to work when ill because they fear they will be targeted in the next round of redundancies 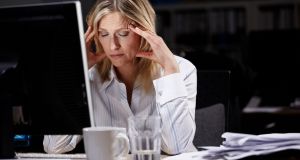 People often soldier on because they work for leaner, more stressed, companies where the pressure to do more with less is constant

I woke up one morning last week with all the usual signs of a nasty cold: thumping headache, blocked nose, spousal accusations that I had spent the night snoring like a pregnant hippo.

Then I did what almost everyone I know does on a day like this. I got up and went to work. On the way in on the Tube, I was coughed and spluttered over by a lot of people dressed for a day at the office. When I got to my desk, doubtless laden with fresh supplies of pathogens, the air was ringing with the familiar snivels of a London autumn.

Such is the state of what the human resources industry has come to call presenteeism, or coming to work when ill. A tide of research shows this is bone-headed and counter-productive, for companies as well as workers.

Everyone knows a day in bed speeds recovery and stifles the spread of germs in the office. People with more serious ailments than a sniffle face worse woes by continuing to work, especially where mental health is concerned.

I have heard several experts claim that presenteeism is now a bigger problem in the UK than absenteeism and could even help explain the country’s dismal productivity growth. I have no idea if that is true. What I do know is that I am tired of reading the “good news” that a growing number of companies are cottoning on to the presenteeism problem and doing something about it.

This generally takes the form of “workplace wellness” programmes full of once unimaginable perks: cheap gym membership, quinoa salads in the canteen, stand-up desks and the odd massage. This is standard stuff for most people I know in large organisations.

Some have it even better. A friend who works for a big American company’s London outpost told me over a drink the other night that his office not only has its own gym, physiotherapist and masseur, but also an in-house dentist.

American businesses are demons for the corporate wellness trend. It makes sense in the US, where companies pay the health insurance costs of workers. And personally, I have nothing against lunchtime dentistry or kale smoothies. I am sure they do more good than harm. But I do not believe such things alone will do much to stop people coming to work when they are ill.

The chief reason people soldier on has nothing to do with how fit they are. It is because they work for leaner, more stressed, companies where redundancies are common and the pressure to do more with less is constant.

This makes some people fret that they will be targeted in the next round of redundancies if they have taken a lot of time off. Others worry about lumbering stretched colleagues with more work in their absence.

These workers are not to be confused with the most tedious presentee-ists, who insist on showing up half dead at the office to demonstrate how indispensable they are to the operation. Nothing can be done for these people and thankfully they are probably in a minority.

As for people like me, my excuse for going to work is that I was not entirely sure if my symptoms were due to a virus or a late-night of blathering after a red-eye flight. I bet on the latter, which seems to have been right so far.

The answers to the presenteeism problem are not clear, especially if you work in an industry undergoing serious technological disruption, which seems to cover most sectors today. I phoned up one of the people credited with coining the term presenteeism, Prof Cary Cooper of the Alliance Manchester Business School, to see what he thought.

He agreed that there is not much to be said for “silly things” like ping-pong tables and office bean bags.

Rather, he thinks the solution lies in training line managers to be better at spotting when employees are under too much stress or ill, and dealing with the situation sensibly – skills that the average MBA student is taught too rarely.

I think he is on to something, even if management ranks are also thinning out in ever-leaner organisations. I do not expect anything to change soon but at least someone has come up with a better idea than handing out another batch of gym vouchers.