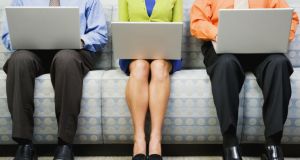 More than half of Irish women born between 1980 and 1995 believe their employers favour male colleagues when it comes to internal promotion, according to a new study.

The report, which has been published to coincide with International Women’s Day, also shows that two-thirds of Irish women aged between 20 and 35 years believe that while companies may talk about promoting diversity in the workplace, opportunities are not really equal for all.

PwC surveyed nearly 9,000 so-called millennial women for its international study, including 139 participants in Ireland. The study shows that while Irish women employees are more sceptical about companies’ commitment to helping them climb the corporate ladder, many still believe they can progress in their careers.

The PwC study shows that 56 per cent of Irish female millennials scored their employers as too male biased when promoting from within, placing Ireland as the third most male-biased country after Spain (60 per cent) and France (58 per cent).

Nonetheless, the report also suggests that women are less likely to let this set them back with 48 per cent of Irish female millennials surveyed saying they believe they can reach the very top levels with their current employers. Furthermore, 85 per cent of women employees here said there are more senior female role models who resonate with them at their employers compared to just over two-thirds globally.

Career opportunities were ranked as the most attractive employer trait by women employees in Ireland, followed by competitive wages and a good benefits package.

Similar to global counterparts, Irish millennial women also ranked a lack of opportunities for progression as the most common reason they had left a former employer.

When it comes to diversity, 88 per cent of Irish female millennials reported seeking out employers with a strong record on diversity, equality and inclusion. However, an overwhelming majority said that organisations here were more interested in paying lip service to diversity than genuinely creating opportunities for all.

Some 57 per cent of female millennials in Ireland said they felt taking advantage of work-life balance and flexibility programmes had negative consequences at their workplace, compared with 44 per cent of women globally.

The study also reveals that Irish millennials are more likely to be the primary earner when in a dual career couple compared to their global counterparts with an overwhelming majority in Ireland earning equal to or more than their partner or spouse.

“Our research shows that when it comes to the female millennial, we really are talking about a new era of female talent. Female millennials are more highly educated and are entering the workforce in larger numbers than any of their previous generations. But, this is not the only thing that has changed. They also enter the workforce with a different career mindset,” said Susan Kilty, people partner at PwC Ireland.