Wild Geese: Graham McCulloch on the Ecoexist Project in Botswana 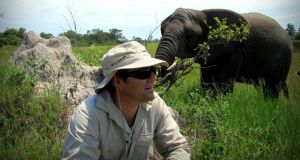 Graham McCulloch: “After I finished a degree in zoology at the University of Dundee in 1994, I got a contract as a safari guide with a company which was starting up in Botswana. All I wanted was a year’s experience, but that milestone came and went and I’m still here.”

How do you stop yourself being trampled by an elephant in your sleep? Attach chilli peppers to a fence of course! That’s just one of the many things I learned from ecologist Dr Graham McCulloch. The 41-year-old from Ballyboughal in north Co Dublin has called Botswana home for 20 years.

“After I finished a degree in zoology at the University of Dundee in 1994, I got a contract as a safari guide with a company which was starting up in Botswana. All I wanted was a year’s experience, but that milestone came and went and I’m still here.”

Wooed by the wildlife, Graham began to research a PhD based on the Makgadikgadi wetlands of central Botswana. His study included monitoring the comings and goings of birds, prompting locals to nickname him “the Bird Man” or “Mr Flamingo”.

On one of his own migrations back to Ireland, he met his future “Mrs Flamingo”, fellow ecologist Anna Songhurst.

Her love of elephants and his love of Africa eventually led to the pair setting up the Ecoexist Project in October 2013. The five-year venture – funded by a philanthropist billionaire from the United States – aims to resolve conflict between elephants and farmers.

“While elephants in other parts of the world are being killed to supply the ivory trade in China and southeast Asia, the population in Botswana is very healthy. It’s estimated there are about 200,000 elephants and the figure is growing because they are fleeing from neighbouring countries like Angola and Zimbabwe to escape war and poaching.”

Botswana also provides vast areas of safe, protected wilderness in which the population can prosper. Botswana’s human population is about two million and there are parts of the country where there is one elephant for every person.

“We are trying to resolve issues that have arisen between farmers and the elephants. The elephants raid maize and watermelon crops, which feed families. But the expanding farmlands are crossing corridors where elephant families have been passing through for decades.”

Playing peacekeeper between man and beast can be fraught with danger.

“I’ve been around elephants for a long time because I began my career working as a guide. But that was in game reserves where they have no need to fear people. On the edge of the Okavango Delta, it’s a different story. Here, they know people don’t like them because they raid crops.

“Breeding herds are particularly aggressive when protecting young. We recently darted a female elephant from the helicopter, but when we landed to collar her, her three-year-old calf wouldn’t leave her side.

“You only have a window of about 20 minutes to do the job, so I found myself running through the bush clapping my hands trying to chase the calf away. Even though it’s a baby, it’s still more than six foot tall and weighs about a tonne.

“It was also distressed, so I was very aware that it could turn and charge and knock us over like bowling pins.”

Graham says being among the people and elephants is a vital part of understanding the issues, but it also means living in one of the most remote parts of Africa.

“We built our own house on a tiny island on the edge of the Delta for us and our two-year-old daughter Ebany, who has lived here since she was three months.

“The nearest city is an eight-hour drive, while the nearest shop is about three hours away. I once drove 120km to get yoghurt when my wife had pregnancy cravings!

“We have to really plan our trips and make sure we have enough food and supplies to last us a couple of weeks at a time. We have a good satellite system for the internet as we need to be connected for our research, so that helps us from feeling completely cut off.”

Rearing a child in such a remote area offers rewards as well as reality checks. “Ebany loves it here. We have herds of zebra around the camp at the moment as well as elephants. But the odd lion and hyena can wander through so we never leave her alone or get complacent about the precautions we have to take.

“We also have a fairly comprehensive first-aid kit as the nearest hospital is about a three-hour drive away. But if we had a real emergency, we could always be flown out.”

Thoughts of living so far away from civilisation, for long periods of time might unnerve even the bravest adventurer, but Graham says it only heightens the experience.

“It’s the remoteness that makes it so attractive. We are literally living on the edge in so many ways. It’s one of the most amazing natural places in Africa and the world.”

So is there anything that could entice Graham back to Ireland from his paradise island?

“The last time I was home I took a picture of a big pint of Guinness on my phone and it’s now the wallpaper on my computer.

“I know that’s such a terrible cliché, but besides family and friends, it’s the only thing I really miss.”