How playing games can really help to build teams 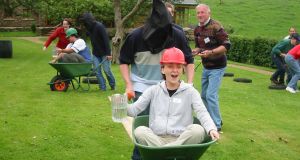 The opportunity to pelt an irritating co-worker with paint might seem like the answer to a prayer. But paintball, a military-style game in which participants shoot paint-filled guns at each other for fun, can turn nasty and end up polarising the teams it was supposed to unite.

Opinion is divided between those who say that activity training adds little to the bottom line and those who believe it makes a contribution even if that contribution is difficult to quantify. And there’s the rub. It has proven very difficult to establish if employees make the connection between an activity and their job, if they bring the learning back to their workplace and if they can apply it in different circumstances.

What seems clear from sifting through the arguments on both sides is that activity training is more likely to work when there is clarity around why a company is doing it. There is absolutely nothing wrong with treating employees to a fun day out as a reward for achieving certain targets or to boost morale after a major restructuring, for example, but don’t confuse socialising with team-building.

Assuming there’s an underlying strategic objective to the “day out,” then it is likely to be most successful if the activities are “real” and related to key business areas such as defining strategy or improving process or accountability. Reality matters because adults generally learn best by engaging with relevant tasks.

Activities must also suit the teams they’re aimed at. The adrenalin rush of whitewater rafting may appeal to the confident, outgoing types typically found on sales teams, but could be highly divisive for more reflective groups.

“You have to be careful with the exercises chosen as it’s not in anyone’s interest for people to fall flat on their faces or feel diminished by the process,” says Patrick Flood, professor of organisational behaviour at DCU Business School.

“It’s also important to work with an experienced facilitator, ideally someone specialised in team dynamics, to ensure you ‘can bring people back’ during a debrief after the event. There is always the potential for major bust-ups, especially within management teams, as people at senior level are often individualistic, highly motivated and tend towards rivalry. Do you really want this to spill over in front of a general audience?”

Flood, who is also co-director of the Leadership and Talent Institute, has experienced activity-based team-building first hand.

“I’ve been on a high wire between trees where you are totally dependent on the people below. When you get to the other side in safety, the beneficial impact on trust levels is enormous and this can be used to foster alignment – always one of the most difficult things to achieve – within a team,” he says.

Flood says activity teambuilding can also show up strengths in employees that managers were not aware of.

“It’s about recognising the skills and leadership in others and using it,” he says. “You will always get some who are reluctant to participate, but if there is a genuine commitment at the top, most people will row in.”

“The facility had been through a lot of upheaval with changes in personnel and the stress of a Hiqa audit so the objective was to break down barriers and say thanks to everyone for pulling together,” she says.

“We included all staff but there was an option not to participate. A small number availed of it, but I think some regretted their decision afterwards, as it was a great day. People are already asking when are we doing it again.

“For us it definitely achieved the objective of people getting to know each other and appreciating that everyone who works here makes an equally important contribution to the quality of the service we provide.”

Joe Hayden set up The Orchard activity centre in 1999 to run conferences and corporate training events for Irish and international clients on a 300-acre site in Co Wicklow. Domestic sales took a hard knock during the recession, but Hayden says local business is now picking up dramatically and The Orchard is on course for a 40 per cent growth in bookings this year.

“What we’re seeing is a big demand from Irish companies that downsized during the recession for help with building new, cohesive teams from those who remained,” he says. “Companies also want help with energising and motivating these teams and we build our activities around achieving these objectives.

“Companies either come here or we travel to them and fit an activity around a conference or other event. What we’re doing is serious in nature, but we also try to inject humour into the programme. Setting teams the challenge of rounding up wild Wicklow sheep on a hillside without the help of a dog is a great ice-breaker.”

1 Corona beer firm reeling after 8% slide due to coronavirus
2 Why Irish banks are now looking beyond vulture funds on problem loans
3 Pharma giant AbbVie warned Government against ‘unfair’ €572m tax bill
4 We have little chance of building enough homes to meet election promises
5 Claims of intra-family espionage emerge in billionaire Barclay family feud
6 Life as a Facebook moderator: ‘People are awful. This is what my job has taught me’
7 How well paid do you think you are? Here’s how to work it out
8 Coronavirus: Stocks fall again in worst week since 2008 crisis
9 ‘The only time apartments were viable was in . . . Ballsbridge, Killiney and Dalkey’
10 Irish companies raise a combined $518.9m in VC funding
Real news has value SUBSCRIBE