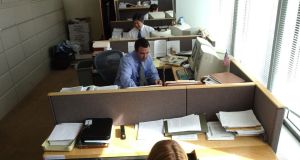 The natural human reaction in these circumstances is to be peeved, but sinking into a depression or getting visibly angry, won’t get you very far.

There can be multiple reasons why an anticipated promotion at work doesn’t happen.

Maybe the company is struggling and can’t afford the extra cost. Maybe your skill set isn’t up to it and it’s time to start plugging the gaps. Maybe you’re so silent about your achievements that your name never even came up when the promotion was being discussed.

Maybe you don’t take feedback well and those above you reckon it would be a mistake to promote you.

Promotions are a rite of passage at work and when they don’t materialise they not only upset the individual concerned but also the dynamic of the team or department they are part of.

However, organisational politics being what they are, the best candidate doesn’t always get the job. At some point in most people’s working lives there are moments of incredulity when someone unexpected gets the leg up or appears to have been promoted well beyond their capabilities.

If someone has put in the hours and has the necessary skills and experience for a role, then being passed over hurts. What hurts even more is losing out to someone you consider your equal as this smacks of a loss of status.

When this happens, there is a ripple effect across the whole power structure within the group as suddenly the promotion has levelled the playing field and people are jockeying for position in the new order.

This can be a volatile time for any team and managers who don’t anticipate the impact of an unexpected promotion may end up wondering “what’s going on here?” as people get antsy with one another and the interpersonal relationships in the group shift.

While not getting a promotion can be a valuable learning experience, it depends upon an individual having sufficient self-belief to be able to keep the rejection in perspective.

The natural human reaction in these circumstances is to be peeved, but sinking into a depression or getting visibly angry, won’t get you very far.

Advocates of positive psychology advise reframing the rejection to see it as a disappointment not a tragedy and to refrain from saying or doing you might later regret such as bitching at the watercooler or letting fly at someone over the decision.

Instead, he suggests working through the range feelings that will naturally arise while avoiding the tendency to wallow in anger and disappointment.

As part of the reflective process consider what might have stood in the way of your promotion. Not having the hard skills is the obvious one but what about the soft skills?

Are you good at your job but pretty clueless when it comes to managing people? If so then then you may need to invest in some leadership training and to consider a sideways move that would help build the experience you need.

Not showing initiative can go against you for a promotion as can coming across as a whiner who grizzles about everything but comes up with solutions for nothing. Apparent lack of commitment (if you’re always last in and first out) does not play well as can coming across as entitled especially on the grounds of length of service. What most organisations today care about is your contribution here and now, not what it has been.

Writing in the Harvard Business Review, Dattner advises trying to see what’s happened as an opportunity.

“People often look back on setbacks in their careers and see them as great moments,” he says.

He also points out that not getting a promotion can sometimes be a blessing in disguise as it may have involved longer hours and a lot more stress. He also suggests considering why you wanted that job so badly. Was it for the title or the money or the status and is there another way of satisfying this need without a promotion?

Didn’t get that promotion?

Stay cool. Try and find out why you didn’t get the job and act on the feedback.

Ask your boss/relevant senior manager what you’d need to do to be successful next time around.

Take on a “stretch” assignment that lets you prove your abilities.

Make a list of specific things you’ve done to add value to your team or organisation and talk about them at the next promotion opportunity.

There will always be colleagues who will shamelessly take the credit for other people’s work. Be sure those who matter are aware of your contribution.

Things not to do

Go storming into your boss demanding an explanation for being passed over.

Be narky around the office and hostile to whoever got the job.

Over dramatise the disappointment in your mind.

Take another job impulsively to “teach them a lesson.”

1 Bank leaked my loan request to family who tried to rip me off
2 Ryanair and Aer Lingus monitor impact of coronavirus on travel to Italy
3 Boris Johnson's new immigration regime will damage much more than industry
4 Exposed to coronavirus: How Irish business is coping with fallout
5 Doing the business
6 Nineteen staff made redundant by Nama share €1m
7 Varadkar resigns amid warning impasse will hit the economy
8 Google completes purchase of Treasury Building for €120m
9 Billionaire Zara founder and German funds vie for prime Dublin offices
10 Concorde takes the Pepsi challenge
Real news has value SUBSCRIBE