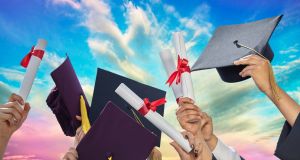 As many millennials are turning their back on big businesses in favour of lean start-ups, are graduate recruitment schemes increasingly a waste of time?

It’s that time of the year again when organisations across the country are preparing for an influx of college-leavers.

Graduate programmes serve both as a launch pad for those starting their careers and as a way for employers to snare the smartest minds straight out of college.

But when many millennials are turning their back on big businesses in favour of lean start-ups, are graduate recruitment schemes increasingly a waste of time?

A recent study carried out by the Association of Graduate Recruiters (AGR) in Britain found recently that despite companies going to a lot of time and expense to mentor young people, many of them leave shortly after graduate schemes have ended.

The AGR interviewed close to 200 of the UK’s biggest graduate employers, who account for nearly 20,000 hires annually between them.

It found that college leavers who win places on graduate schemes stay for an average of just two and a half years after the programme has ended.

Graduates who were former interns typically stay six months longer than those who weren’t, according to the study.

The most common reasons cited for former graduates for leaving were higher salaries from other organisations and unmet expectations of career progression.

He suggested that if employers want to keep staff who join through graduate schemes, they need to be better at managing expectations and updating staff on their progression.

“Organisations that retain graduate talent are those that invest in them. Hiring great talent only works if the talent is meaningfully developed, coached and managed,” said Isherwood.

Cormac Hughes agrees. He is the human capital partner with Deloitte Ireland, an organisation that typically takes on 300 graduates a year.

He says his company has invested a lot of additional resources in recent years to ensure it better manages those joining the firm.

“Graduates are a core part of our business model and we’re proud that so many young people start their careers with Deloitte, even if some of them will eventually move on elsewhere.

“Graduates really add a lot to the company in terms of innovation and we realise that for them to perform well while they are with us is dependent on us managing them well,” he said.

“Millennials are much less inclined to come in and just sit there and be told what to do.

“They want to develop and to be empowered in all that they do so it is our job to ensure that we help them with this,” Hughes added.

He admits there is much more competition from employers to attract graduates than in previous years but adds that the reasons for wanting them remain the same.

“We kept recruiting graduates during the downturn when a lot of other businesses didn’t and we’ve noticed many of them are now back in the market.

“This obviously makes our job a little bit more difficult but we still go all out to recruit graduates because they make a very positive contribution to our business,” said Hughes.

His experience leads him to believe that money is certainly not the key to encouraging graduates to join companies and that it isn’t essential how clued in they are initially.

“We certainly wouldn’t view the current crop of graduates as being cynical and disloyal.

“If anything they are possibly more idealistic than previous generations and as a result are less interested in financial rewards than in knowing what opportunities there are to advance, what an organisation is doing in terms of corporate social responsibility and so on,” said Hughes.

“We’re aware that there will be some graduates who come to us who will want to go off and do something else different but that’s always been the case.

“We’ve found our retention rate is good and that graduates make a big difference, so we’re happy to continue to invest in them,” he added.

Supermarket chain Lidl, which has become a major employer in Ireland in recent years, is also a big graduate recruiter.

The group’s director of HR, Maeve McCleane, estimates the group has over 1,000 applicants for its programme every year.

She said those who join Lidl tend to stay with the company, long after the graduate scheme finishes.

“Over the past years the majority of our graduates have secured permanent contracts with us after the fixed period of the programme.

“Some have moved on to positions in other countries within the Lidl group, some have left to join other organisations and have come back to Lidl after gaining experience elsewhere.

“However, most have remained with us and are engaged, motivated colleagues, whose contribution continues to add significant value,” said McCleane.

She believes ensuring graduates stay largely depends on taking active steps early on to make sure those starting with the company fit in with its culture.

“Investment in quality training and development is also crucial. Giving the graduate every chance to be the best they can and offering real opportunities that a graduate can aspire to is key. Then they won’t want to leave,” she said.

As for suggestions the current crop of graduates isn’t “work-ready”, McCleane admits that the challenges for the workplace can come as a shock for those learning the business from the heart of it, for example, in the stores and warehouses of Lidl.

“That said, the graduates generally throw themselves into it and rarely complain. They are not shy in challenging and being pro-active with their training.

“They are hungry to learn and seek out feedback,” she said, adding that most quickly adapt to the work environment.

It has a relatively small graduate scheme. However, the group’s chief people officer, Jennifer Lee, said its programme, which is run in tandem with its internal trainee management scheme, has proven successful in providing staff who stay long after such initiatives have ended.

“The key is to be good at adapting programmes when necessary because what both younger people and companies are looking for changes over time.

“In recent years, we’ve tweaked our programme significantly, introducing things like an online platform for graduates to do elearning and to keep in touch with each other.

“We’ve also started a better mentoring programme, which can be particularly important for those working in the hospitality sector because they may be moving between hotels in different cities and countries, and some might not have even lived away from home before,” she said.

“Our experience is that if you look after graduates well by offering them plenty of opportunities to progress then most are more than happy to stay and develop their careers with you and offer a significant contribution to the organisation over the long term,” Lee added.