Pilita Clark: You can get away with a prank if the victim is a pal or a more senior colleague 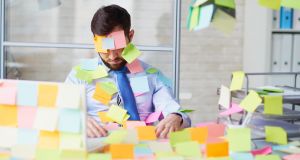 Oh how we laughed. Photograph: iStock

These words are being written on the eve of one of the silliest yet most cheering days of the year: April Fool’s Day.

I regard April 1st as a chink of light in the fog of stress and boredom that shrouds so much of working life. It also unfailingly reminds me of all the inspired office pranks I have come across over the years.

At the Financial Times, these were often done by a gifted man I will call “Alan”. One of his finest moments came when he arrived at work to discover his computer had mysteriously logged him on as the paper’s distinguished Asia editor.

For a veteran prankster, this was an unrivalled stroke of luck. As “Alan” later told me, “I was like the surfer who has waited all his life for the big wave”.

He immediately fired off a message to the Seoul correspondent to tell her she was sacked. Being a friend, she wrote back at once to ask, “Is that you Alan?” His next message scored a more direct hit. Writing to the entire foreign desk, the “Asia editor” asked: “Does anyone speak Asian?”

There was silence in the ranks. “What Asian language?” asked one editor. “You know, the language they speak in Asia,” said Alan. When the penny eventually dropped, the actual Asia editor, who fortunately had a robust sense of humour, took it well.

All of which underlines some important rules about practical jokes at work, starting with relations between the prankster and the pranked.

It is widely thought that a rising mood of political correctness, HR zealotry and sensitive millennials has made the office prank unseemly. It no doubt is in many offices. Yet this is only half the story. Alan’s caper might have been of its time but it is still a reminder that you can get away with a good joke if you know the victim well and better yet, they are a friend and more senior. Pranking an underling is not to be encouraged.

Nor is it advisable to hide a colleague’s phone in the ceiling above their desk so they have to climb up to get it when it rings. They can fall down, get injured and sue for a wrecked career, as a policewoman did in a London court last year after that joke went awry in an Essex police station. Better to follow the example set by Penny Mordaunt.

In 2013, the Conservative Party MP rose to deliver a brief speech in Westminster on poultry welfare. “The cause of hen and cock welfare is one raised with me by many constituents,” said the Royal Navy reservist, who managed to mention “cock” or “cockerel” six times, along with five “lays” or “laids”. She later admitted she had done this after a dinner with marines, where she had been “fined” in a jape that required her to utter such words on the floor of the Commons.

There was huffing from Ms Mordaunt’s Labour opponents. But she went on to become a cabinet secretary, which demonstrates something else about the successful office joke: it works best when no one is hurt and the greatest risk is posed to the prankster.

The late scientist George Gamow did this brilliantly in a 1948 paper on the beginning of the universe that he wrote with one of his students, Ralph Alpher. Gamow persuaded the nuclear scientist, Hans Bethe, to add his name to the study, so the authors’ names read Alpher, Bethe, Gamow, like the first three letters of the Greek alphabet: alpha, beta, gamma.

Obviously, even the best office jokes can backfire. Last week I spoke to a media analyst named Derek Terrington, whose name still inspires joy in the City of London.

In the early 90s, when he was working for UBS, he wrote a note about the flotation of Robert Maxwell’s Mirror Group Newspapers on which he put the headline “Cannot Recommend a Purchase”. When the acronym was spelt out to the mogul, “he went ballistic”, said Mr Terrington, who left UBS for calmer pastures a short while later.

So would he recommend a young analyst starting out today follow suit? “To be honest they probably shouldn’t,” he said. “I wouldn’t want anyone to lose their job because their wit was not appreciated.”

This strikes me as sad, yet inevitable. There is one office joke rule I think we can all agree on: do not even consider it if you work for an investment bank.