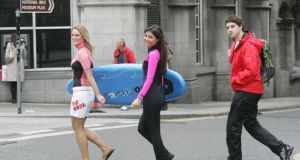 Portwest has been growing at a rate of 30 per cent a year and sells in 110 countries. Photograph: Cyril Byrne

The Westport-based safety clothing and protective equipment maker Portwest has splashed out almost €10 million buying another Australia company to expand its presence in that market.

The family-owned business signed a non-disclosure agreement with the Melbourne-based company, also family owned, it acquired preventing it from naming the firm. Just six months ago the Co Mayo firm acquired another Australian company called Prime Mover Workwear in a deal worth €7.5 million.

The second acquisition will more than double the Irish company’s turnover in Australia and New Zealand to between €20 million and €25 million, which will represent about a tenth of its overall business.

“This acquisition now follows on from the original acquisition six months ago. It catapults it to the next stage of growth,” Brett Birkill, chief executive of the Irish subsidiary who sold Prime Mover, told reporters on the fringes of a business event in Melbourne attended by President Michael D Higgins.

Portwest, which is owned by Harry Hughes and his family, has been growing at a rate of 30 per cent a year. It has 2,100 employees, including 150 in Westport and 70 in Australia, and sells in 110 countries.

The company has also announced the building of a new corporate headquarters in Mayo at a cost of more than €10 million and plans to grow staff number over the coming years.

Julie Sinnamon, chief executive of Enterprise Ireland who hosted the Melbourne event, said: “Markets like this [Australia] are really important for them in terms of jobs back home.”

Portwest, trading in Westport since 1904, is being run by the third generation of the Hughes family. They also own four-star Hotel Westport and the Westport House, the 18th-century mansion.