Week of drama in Westminster ends with likely Brexit delay 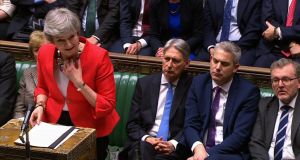 There was said to be disbelief in many European capitals this week as UK prime minister Theresa May was comprehensively defeated in another key vote in parliament yet continued to cling on to the reins of power in London.

“This goes against everything I know about politics,” one senior EU diplomat told a reporter.

“How can the UK parliament allow this to go on?” they asked, echoing the sentiments of just about everybody outside the halls of Westminster.

May lost the vote on her Brexit deal by 391 votes to 242 – the second time MPs have rejected the agreement since the turn of the year – despite having earlier declared that she had delivered “exactly” what parliament had asked her to.

The prime minister returned from late night talks in Strasbourg promising that “legally binding changes” to the Northern Ireland backstop had been agreed with European Commission president Jean-Claude Juncker.

Hopes that it might be enough to swing the requisite number of MPs to get the deal over the line were quickly dashed when UK attorney general Geoffrey Cox dismissed her claims, and said the legal risk remained “unchanged”.

It was at that point that May’s house of cards began to tumble down. First, the ERG, a group of hardline Conservative Brexiteers led by Jacob Rees-Mogg, and then the Democratic Unionist Party declared their intentions to vote against the deal.

After the vote senior EU diplomats, including Juncker, chief negotiator Michel Barnier and European Council president Donald Tusk, said the risk of a no-deal Brexit had “increased significantly”, and placed the onus squarely on London to find a solution.

The next day May published her government’s plans for a no-deal Brexit, which included a temporary tariff regime which would mean tariffs on goods crossing the Border into Northern Ireland would not apply.

However, tariffs on goods entering mainland Britain would be high in some cases, with the Republic’s agrifood sector facing a “disastrous” hit of €800 million, the Irish Farmers’ Association said.

That night MPs narrowly voted to rule out leaving the EU without a deal.

Less than 24 hours later there was more drama as the House of Commons voted to seek an extension to the article 50 negotiating period, effectively delaying Brexit as long as the EU agrees.

There was even talk of a third “meaningful vote” on May’s deal at some point, as if anything about the process can be deemed meaningful at this stage.

Meanwhile, a report by New Financial, a think tank, found Dublin to be in “a league of its own” when it comes to attracting business from the UK, with at least 100 companies choosing the city as a post-Brexit location.

Indeed, the Central Bank this week authorised fintech firm Optal to set up here, while UK investment firm Smith & Williamson said it was “well advanced” in its application.

Opposition TDs teased the Government some months ago about an article on the satirical website Waterford Whispers headlined: “Government confirm intention to use Brexit as excuse for everything”.

Well, maybe they were on to something. Planned new rules to make senior bankers more accountable individually for failings or wrongdoing may not be in place for another year as the Government prepares for the UK’s EU exit.

Minister for Finance Paschal Donohoe said last November that he planned to publish a draft version of legislation in the first three months of 2019, but the timing of the introduction of the heads of a Bill is likely to be pushed out now.

Separately, it emerged this week that Donohoe held a meeting with a group of investors in November at which he was told that Irish bank pay caps and bonus restrictions were now a major worry.

At the meeting investors, brought together by Deutsche Bank, told Donohoe that restrictions on executive pay at AIB and other partly State-owned lenders were hampering efforts to attract top talent.

The Government caps salaries at €500,000, and has banned bonuses at AIB, Bank of Ireland and Permanent TSB as part of their bailouts. Even if bonuses are reinstated, payments over €20,000 would face an 89 per cent super-tax.

Staying with banking, a study by the Department of Finance found that non-bank lenders offer the greatest hope of driving down Irish mortgage rates.

The logic was that the State’s banks – charging well above the European average – must hold up to five times as much expensive capital against home loans as they did before the crash due to the scale of the loan arrears crisis.

Meanwhile, An Post is looking to launch a mortgage product in the spring of next year, it said on Wednesday, when announcing a loan product that offers up to €75,000.

We caught a glimpse of the in-trays of three of the Republics best known businessmen this week.

US-based lawyers for Digicel, the Caribbean and Pacific Islands telecoms company owned by Denis O’Brien, asked a court to dismiss a complaint by US-based Haitian emigrants who accuse it of being part of a “conspiracy” to divert taxes on telephone calls.

Digicel, which has strongly denied any wrongdoing, is one of five businesses and several current and former political leaders of Haiti who are being sued in New York by the Haitian emigrants over an alleged “scam”.

Elsewhere, billionaire Dermot Desmond is to charge Datalex a 10 per cent annual rate of interest for a €6.1 million loan he is set to give the troubled Dublin-listed software company as part of a funding package to shore up its finances.

Datalex confirmed on Thursday that Desmond’s investment vehicle, IIU, which already owns 26.4 per cent of the company, has bought €3.86 million of new shares in the business at €1 each.

It was a rare insight into the financial scale of ABP, the accounts of which are shielded from public view in Ireland under its unlimited status.