VT Networks: Finding a business through the Internet of Things

Utility meters, environmental sensors, security systems and GPS trackers are just some of the devices that could be hooked up to their service 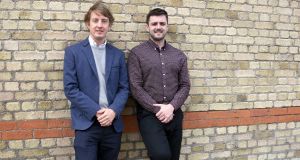 Will Ferguson and Mark Bannon, co-founders of VT Networks

Mark Bannon and Will Ferguson, co-founders of VT Networks, are part of an emerging breed of young entrepreneurs whose businesses have been enabled by the arrival of the Internet of Things (IoT). For them, less is more as their focus is on sending small amounts of information periodically whereas cellular connectivity is focused on sending large amounts of data all of the time.

Utility meters, environmental sensors, security systems and GPS trackers are just some of the devices that could be hooked up to their service and this market is set to grow exponentially. Mark Bannon says it is estimated that the IoT will reach 80 billion connected devices by 2020.

Bannon had been interested in the potential of the IoT for some time and initially thought about using it to develop bicycle and personal wearable tracking devices. However, he quickly came up against a problem. “I discovered that most tracking devices were GSM (cellular) based and had a battery life of only one or two days. This was clearly a problem,” he says.

Bannon started looking into how to extend the life of these devices and by chance got pointed towards Sigfox, a French startup building wireless networks to connect low energy objects such as electricity meters and smart watches. Bannon had his “light bulb” moment and it didn’t take long for Ferguson, a former classmates at the Smurfit Business School and former colleague at PwC, to see the potential and row in.

“It was immediately clear to me that this technology was revolutionary,” Bannon says. “Will and I got together and raised €1.2m in cash and bought the exclusive licence for Sigfox for Ireland. Sigfox is currently the only commercially available IoT-dedicated connectivity solution that guarantees a high level of service and reliability on an international scale.”

Bannon and Ferguson set up VT Networks towards the end of 2014 and their business now employs five people. Phase one of the nationwide network roll out was completed in June of this year. To keep costs down and focus what they’re good at – business development – they outsourced the infrastructure network and maintenance to RTÉ’s engineering branch, 2rn, in a sweat equity deal. This allowed them to focus on building their customer base and to hit the ground running as 2rn had their network up and running in just five months. “2rn have provided us with an immense amount of skill, knowledge and experience and it has been invaluable,” Bannon says.

The company’s business model is similar to that of a traditional cellular provider in that it’s a subscription service. However, there are a few major differences. “Our network is low bandwidth, low power, affordable and optimised for the sort of simple sensors and devices that make up the majority of the IoT,” Ferguson says. “It allows devices to roam seamlessly across Ireland and to any other country with a Sigfox network. (There are currently 24 and this will rise to 60 within the next two years.) In essence the network connects the digital world to the physical world around it and with the right use case it makes complete sense. It specifically addresses uses that were too expensive, impractical or impossible with traditional connectivity technologies.”

Service users will pay VT Networks per device per year with the maximum cost for a single device likely to be around €16 and the minimum around 88 cents where numerous devices are in use.

Ferguson says that getting in on the ground floor of the “first global IoT network in the world” was down to good timing and being able to show Sigfox they were serious. “We were a risk for them as we were small and new, but we had been out selling before we even had our network so they could see we were highly motivated. We have also been very fortunate in having some great mentors.”

1 Lockdown exit: How can Irish economy reopen without big health risks?
2 Coronavirus: The online scams, apps and trends you need to know about during the pandemic
3 Deliveroo branches into grocery deliveries in Ireland
4 Business owner waiting over a month for overdraft approval
5 Cold water poured on idea of ‘helicopter money’
6 Coronavirus: How Covid-19 may reshape the Irish retail landscape
7 Finance ministers gather as fears grow even the future of the euro zone is at risk
8 Why we should be slow to use tracking apps in coronavirus response
9 I want to change my will quickly in case I fall ill. Do I need a lawyer?
10 Q&A: Where do we stand on mortgage holidays and payment breaks?
Real news has value SUBSCRIBE