Talks on cuts have reached stalemate in recent weeks 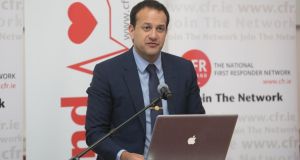 Minister for Health Leo Varadkar: “The Minister is determined that the State will have the funds to ensure patient access to effective new therapies,” a spokesman said

It is understood that talks between the Department of Health and the pharmaceutical industry on further price cuts, as part of a mid-term review of an existing agreement, have reached stalemate in recent weeks.

Under the deal with the Irish Pharmaceutical Healthcare Association, which represents many of the producers of proprietary drugs, prices paid by the State are benchmarked against those in nine other European Union countries.

It is understood the State’s negotiators have argued that prices in many of these countries have fallen since the Irish agreement was signed in 2012.

However, the pharmaceutical industry is understood to have argued that while the 2012 agreement provided for two exercises to re-align prices for different categories of drugs in 2012 and 2013, it did not specifically allow for such a re-alignment as part of a mid-term review. However, the deal did allow for operational and governance issues to be looked at during the mid-term review.

Sources said the industry maintained that the savings earmarked under the deal were being generated and that business plans of individual companies agreed with their headquarters were based on existing prices.

The current agreement expires in November this year.

It is understood the State had hoped that savings realised under the 2012 agreement would allow for the health service to pay up to €210 million for the cost of new products coming on stream.

However sources said this figure was now likely to be exceeded. A spokesman for Mr Varadkar said: “The Minister is determined that the State will have the funds to ensure patient access to effective new therapies.

“To do this savings must be achieved in the existing cost of medicines. The Minister is keen to do this in cooperation with the industry. Should this not prove possible then all alternatives including the use of the provisions of existing legislation will have to be considered.”

Chief executive of the Irish Pharmaceutical Healthcare Association Oliver O’Connor said the industry was prepared to talk with the Minister in the context of a mid-term review or in relation to a successor agreement.