Most simply and accurately described as a digital ledger, the technology, still in its infancy, cannot be ignored 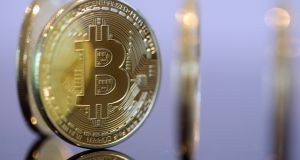 The cryptocurrency known as bitcoin and the digital ledger upon which its transactions are recorded, the blockchain, are now being taken seriously by more than just e-pirates. Photograph: Chris Ratcliffe/Bloomberg

“Don’t file this piece until you’re confident you could walk into any bar in the world and explain the blockchain clearly to a complete stranger.” The editor’s final remarks upon commissioning the following words were a little disconcerting. But the idea of getting to work in a bar was attractive.

Unfortunately a comprehensive guide to the blockchain isn’t technically possible. This isn’t a cop out. The technology is still in its infancy. So no one knows for certain what is coming next.

What is certain, however, is that the cryptocurrency known as bitcoin and the digital ledger upon which its transactions are recorded, the blockchain, are now being taken seriously by more than just e-pirates.

The blockchain has been described in a variety of ways: a trust machine, a downloadable movie being created in real time, or more simply and accurately, as a digital ledger. One of the best explanations of why anyone should care came from American entrepreneur and former child actor Brock Pierce. At a talk he gave in 2014 hosted by Wired magazine, Pierce likened it to the internet. To paraphrase: “While the internet has transformed communications, the blockchain has the potential to transform the value chain. It is the internet of value.”

Of course he would say that. Apart from starring in The Mighty Ducks, as a grown-up Pierce has helped establish a number of digital currencies. But those with no vested interest in the technology are also coming out of the crypto-closet.

Yes, but what is it?

Anyone who wants to can inspect it but no single user controls it. Similar to how information is verified and maintained on Wikipedia by its users, participants in a blockchain system work collectively to maintain the ledger and make sure it is up to date. Any amendment can only take place by general agreement and is subject to whatever rules and regulations applied to that particular blockchain. So while the “internet of value” is a fair analogy, despite being referred to in the singular, there are many blockchains as opposed to one “internet”.

The blockchain and cryptocurrency

With conventional currency, the security of one’s savings is guaranteed by whichever financial institution one chooses to bank with, all of which are overseen by a central regulatory authority. In the case of cryptocurrencies – bitcoin, litecoin, ethereum, or any of the hundreds of others that have emerged since the pseudonymous Satoshi Nakamoto first released the technology back in 2009 – the cryptography, or complex mathematical coding, supporting blockchain technology is the central bank or arbitrary governor of the financial system.

The details of a transaction or record are stored together as blocks of hashes and each block is permanently linked to its predecessor, hence the name, “blockchain”. Visually it could be likened to a tree where each branch can be traced back to the plant’s roots.

All information pertaining to a transaction conducted is logged – time, date, number of participants, transaction amount. However, the identity of the parties involved can remain anonymous. This is why it has been a popular method of payment for illicit activity online.

While adding information to a blockchain is straightforward, it is virtually impossible to go back and edit or delete previously recorded data. This is the principle reason why this technology is now being taken seriously. It has the potential to become the world’s most secure information storage facility.

Each node or connection point in a network owns a full copy of the blockchain. Transactions are verified by so-called “bitcoin miners” who maintain the ledger in return for a fee. The mathematical principles underpinning the technology ensure these nodes automatically and continuously agree about the current state of the ledger and every transaction in it.

Why are we still talking about bitcoin?

Anyone with a computer can potentially be a “miner” and there are both individuals and private companies participating in this new industry. The bitcoin currency has 21 million units of exchange. When it was first launched in 2009, 50 bitcoins were released every 10 minutes. Currently, 25 bitcoins are rewarded for mining a successful block. This reward number – by virtue of bitcoin blockchain’s code design, which is based on an asymptotic curve – will be split in half to 12.5 later this year, then 6.25, then 3.125, etc. Supply will diminish in the long term up until the last block is mined. This is a specific characteristic of bitcoin. Other cryptocurrencies are tailored differently – perhaps to match the needs of a particular industry or simply based on the design preferences of the creator.

Mining is, for all intents and purposes, a type of lottery. The more lottery tickets – or in this case, computer processing power – you have, the more successful your mining is likely to be. While it’s true anyone with a computer can theoretically mine for bitcoin, a bog standard laptop is the digital equivalent of one lotto line in competition with companies buying up hundreds of thousands of lottery tickets for each and every draw. Miners are motivated to keep the blockchain consistent and unalterable by this reward scheme.

What are the potential threats to the security of the blockchain?

Nevertheless, dramatic market value fluctuations as well as theft from people’s digital “wallets”, have occurred. So cryptocurrencies are still susceptible to some of the same flaws inherent in our current method of exchange.

There is another potential threat, which even the most zealous supporters of the blockchain will acknowledge. A “51% attack” refers to any single entity contributing the majority of a network’s mining hashrate, in order to gain total control of the network and thus be able to manipulate a blockchain. Anyone with a vested interest in a particular blockchain, however, is not likely to do this because they would be undermining the market, and their own interests in it, that the blockchain in question was built upon.