Wifi signal in the sky: what to know when flying

Travel Advice: Some airlines offer high-speed wifi and allow for mobile calls to be made 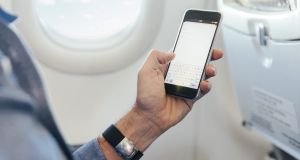 Most airlines charge for wifi, or it may be free in business class. Photograph: Getty Images/Westend61

The use of phones, wifi and personal electronic devices is more confusing now with electronic bans on some flight routes. The use of smartphones and tablets is allowed by most airlines when they are used in airplane mode during taxiing and in the air.

You can switch on wifi to connect to the in-flight network after an announcement is made, usually when the aircraft is above 10,000ft. Do not connect to your usual network, use the in-flight service.

Most airlines charge for wifi, or it may be free in business class; Aer Lingus, Norwegian Shuttle, Vueling of Spain, Turkish Airlines and JetBlue offer a free service to business-class passengers.

You cannot send SMS text messages as it uses the cellular network, however you can send messages and email over wifi with messaging apps such as WhatsApp and Viber. Using wifi you can email, tweet and update Facebook. The in-flight signal has to be shared with all passengers using devices.

British Airways has introduced high-speed wifi on transatlantic and long-haul routes with prices from €4.99-€17.99. The B747 fleet is fitted with the satellite-based service from Gogo Air using 4KU technology.

People are divided about the use of mobile phones on board. At one stage most American carriers had seat-back GTE Airfones, where you used a credit card to make calls. The price was very expensive and the usage was low. Eventually the airlines removed them.

Mobile calls can be made on Emirates A380 flights. Using the OnAir Swift Broadband system the first call was made last October from 37,000ft to a phone in China. Qantas also allow mobile calls on the A380, B747-400 and A330-300 aircraft.