Airbnb says it was drawn to Ireland’s welcoming nature 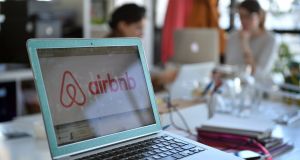 Airbnb hoped Ireland’s enduring culture of hospitality could serve as a template for the firm. Photograph: Martin Bureau/AFP/Getty Images

Some companies may move to Ireland for tax-related reasons but Airbnb was drawn there primarily because of the country’s hospitality culture.

That’s according to Renn Vara, the company’s leadership coach, who helped the property-sharing platform set up operations in Dublin in 2013.

Mr Vara is also cofounder of SNP, a San Francisco-based strategic communications advisory firm that also assisted Google when it first established a presence in the Irish capital, a decade earlier.

Speaking to more than 80 visiting Irish entrepreneurs at Airbnb’s headquarters on Wednesday, Mr Vara said company chief executive and cofounder Brian Chesky was attracted to Ireland over other locations because of its welcoming nature.

He said the company, which is valued at $31 billion following a recent funding round, had hoped Ireland’s culture of hospitality could serve as a template for Airbnb.

“The culture was so strong, and it was this that drew Brian to Dublin,” said Mr Vara, who was speaking as part of the EY Entrepreneur of the Year chief executives’ retreat in San Francisco.

“The Irish are not the only ones who are hospitable but they do it really well. In other countries, such as Japan, it can be a real challenge for a company like ours whose platform is built on sharing, because the culture is one that struggles with trusting outsiders.

Airbnb, which now has two premises in Dublin that together employ about 500 people, is forecasting that revenue will top $3 billion by 2020.

Mr Vara’s company SNP also set up its own office in Dublin in 2014 that employs 10 people.

He said Airbnb’s phenomenal success was due in part to the trust that people had in it and to its policy of seeking to work with, rather than take on, authorities.

He acknowledged that the company was “born into a regulatory grey market” but that unlike companies such as Uber, which has chosen to fight legal restrictions, it had instead sought to negotiate its way around issues.

“The biggest challenge for Airbnb is the tension between growth and policies. However, we’ve sought to be not ‘either/or’ but ‘and’, so for example, we can be both about technology and hospitality, and be both a service and a platform,” he said.