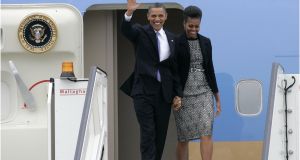 Taoiseach Enda Kenny has renewed his appeal to United States authorities to approve a licence for Norwegian Air International’s plan for low-cost transatlantic flights from Cork to Boston.

Mr Kenny said he was doing all he could to lobby for approval for the new service which is being opposed by aviation unions in the US and Ireland.

Some observers believe it will not be adjudicated on by the US department of transportation until after the US presidential election.

“What I have done is that I have raised this with the president of the United States on two occasions. We have had discussions at a European level and at an American level. You can’t get any higher than the American president,” said Mr Kenny on a visit to Cork.

“The issues raised by the American airlines have been referred to and dealt with comprehensively but it is a matter for common sense to prevail here for a situation that is in compliance with the Open Skies agreement.

“The opportunity for Norwegian Air International (NAI) to fly from Ireland to the States will have the capacity to do for long haul what Ryanair did for short haul with enormous opportunities for both sides.

“It’s not politics that’s holding this back. This is not a political obstruction, and obviously now there is a claim for this to go to arbitration. If the matter becomes approved in the meantime, there will be no need for arbitration.”

Mr Kenny made his comments as European commissioner for transport Violeta Bulc prepares to meet US secretary of transportation Anthony Foxx at the International Civil Aviation Organization assembly in Montreal on Tuesday.

Mr Kenny said the matter was going to be raised in a European context and he stressed that the NAI proposal to fly from Cork to Boston was in compliance and met all the requirements of the Open Skies deal between the US and Europe.

Last April, the US department of transportation indicated issued what is known as “a show cause order” concerning NAI, the Irish-flag subsidiary of Norwegian Air Shuttle and following detailed examinations on submissions of NAI’s application for a permit.

In the show cause order, the department acknowledged that the labour-related concerns raised by the NAI’s opponents warranted proceeding with caution and it consulted with its own legal advisor, the department’s office of the general counsel.

According to the department of transportation, it found that “the provision in the US-EU agreement that addresses labour does not afford a basis for rejecting an applicant that is otherwise qualified to receive a permit”.

US and Irish trade unions have objected to the new proposed service, claiming that the NAI would employ crew on “Asian contracts” that were not governed by the labour laws of either the US or the EU but this has been strongly denied by the company.

Seanad leader Fine Gael Senator Jerry Buttimer, from Cork, said he plans to raise the issue with Minister for Transport Shane Ross and Minister for Foreign Affairs Charlie Flanagan this week to ensure diplomatic pressure is maintained to secure the permit.

1 How much do Irish people earn? And what will Covid-19 do to our wages?
2 Nine more suing INM and Leslie Buckley over alleged data hacking
3 Second Covid-19 outbreak and no-deal Brexit an appalling vista
4 Columbia Sportswear defies gloom with first Irish standalone shop
5 Restaurants file court actions against insurers over lockdown losses
6 British pound sinking to ‘emerging market currency’ status
7 Why are markets booming when a crash is on the way?
8 How to further divide the economy using the wage subsidy
9 Brexit: System agreed for Irish goods to skip checks on UK trade
10 How to . . . move (almost) everything to your new phone
Real news has value SUBSCRIBE