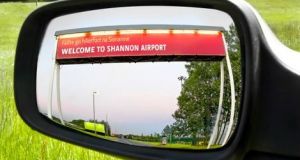 Shannon Airport split from the DAA in 2013, and is now part of the combined aviation, property and tourism State company Shannon Group. Photograph: Getty Images

Neil McGowan, aviation sector division head of the Republic’s biggest trade union, told TDs and Senators that the separation of Shannon from DAA, which is responsible for Cork and Dublin airports, has not succeeded.

“Given its absolute importance the region’s economy, we believe it should be brought back into the DAA,” Mr McGowan told the Oireachtas Special Committee on Covid-19 Response.

Shannon Airport split from the DAA in 2013, and is now part of the combined aviation, property and tourism State company Shannon Group.

Mr McGowan pointed out that Siptu has believed that Shannon Airport should be returned to the DAA fold since before Covid-19 struck this year.

The union says that the pandemic has brought Shannon’s long-term future into question.

A spokeswoman for Shannon Group argued that Siptu’s claim was inaccurate. “Our activities across the group support significant jobs in the region,” she said. “At Shannon Airport we have stemmed a decline in passenger numbers and grown by 23 per cent since 2014.”

She added that the group was taking difficult but necessary short-term measures to preserve the business for recovery from the impact of Covid-19 and to rebuild it in the future.